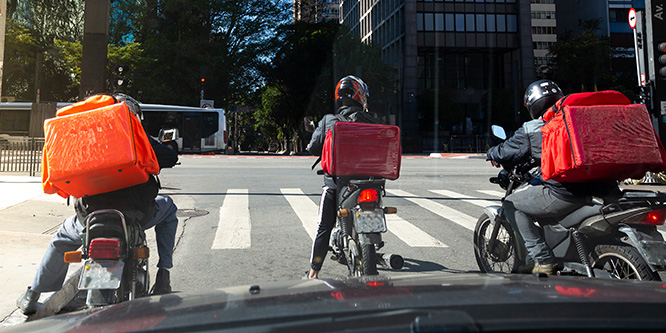 The Netherlands’ city of Rotterdam last week issued a one-year freeze on the opening of “dark stores” or mini-distribution hubs used by on-demand services promising delivery in under 10 minutes.

“Everybody knows them by now: darkened windows, disruption to the flow of traffic in shopping streets, noise from loading, reckless bike delivery people and nuisance from the waiting drivers,” said Rotterdam city council woman Roos Vermeij in a statement, according to Reuters. “There’s nothing wrong in principle with fast delivery, but how it’s being done in practice is bloody irritating.”

The move followed a similar one the prior week in Amsterdam, Netherlands’ capital, following complaints by the public, with regulations also being pursued in Lyon and Paris in France. Ultrafast delivery companies have quickly gained a foothold across major European cities during the pandemic.

In reaction to the complaints, the services have pointed to the positive response they’ve received from residents and the jobs they’ve created, while promising to explore solutions with city councils.

In New York City, local officials are looking to see if dark stores are violating zoning laws. Created in the sixties, the laws are designed to control traffic and noise as well as support walkability and the character of an area. While some dark stores offer in-store shopping, they may not qualify under the regulations for a residential district if they are viewed as a warehouse.

Officials are particularly concerned that bodegas, or corner stores, may be unable to compete with the venture capital-funded ultra-fast delivery startups such as Gopuff and Gorillas that promise speedy delivery for under $2.00. Some offer free delivery under introductory deals.

Critics point out that venture funding kept prices low for consumers and compensation high for drivers when Uber and Lyft first arrived, but both have reversed as rideshare services now chase profitability. Veena Dubal, a law professor at the University of California, Hastings, who studies technology and the gig economy, told CNBC, “That was how they hooked drivers. That is how they hooked consumers.”

Complaints about traffic and idling delivery vans have also been heard as well as around standard e-commerce delivery.

DISCUSSION QUESTIONS: Are the neighborhood concerns about the arrival of ultra-fast delivery firms expressed by the Rotterdam city council fair? Are many of these issues also a challenge for overall online delivery and can they be overcome?

Please practice The RetailWire Golden Rule when submitting your comments.
Braintrust
"Can you imagine when the cute little store down the street turns into a shipping station complete with motorbikes and trucks going in and out all night? Yikes."

19 Comments on "Are ultra-fast delivery services bad for neighborhoods?"

The problem with ultra-fast delivery services is that they need to be proximate to where people live in order to fulfill their promise of speed. That can create negative externalities, such as noise, congestion and stores not open to the public disrupting a traditional retail ecosystem. This generally does not apply to traditional online delivery which has facilities outside of population centers in more industrial or commercial locations. Whether governments should regulate this is a matter for debate. However the bigger question is how economically viable these services are over the longer term.

It’s interesting that sooner or later, if dark stores proliferate, the good old planning and zoning guys are going to have to step in. Can you imagine when the cute little store down the street turns into a shipping station complete with motorbikes and trucks going in and out all night? Yikes. (PS: who knew there were that many in the Netherlands?).

Fast delivery is a perfectly fine idea. What makes it a nuisance is, as pointed out in the article, how it’s done. Numerically, one courier delivering five packages should alleviate more traffic than five shoppers running out to the store in separate vehicles. However there are going to be aggressive competitors who will game the system in search of competitive advantage and profitability.

Local zoning should be able to dictate the rules of local delivery and what businesses are qualified. But early movers, like Rotterdam and Amsterdam, don’t have many precedents for how to codify it to achieve the best results.

These neighborhood concerns are legitimate and important, and yet one more reason why ultra-fast delivery is a bad idea. Does it surprise anyone that an industry built on a business model offering unsustainable prices and unattainable customer promises must create havoc on the neighborhoods it serves in a desperate attempt to reduce costs and fulfill those promises? I only hope more cities get tough on this industry’s business practices before it’s too late, if it isn’t already.

I look at the problem from a somewhat different angle. Yes, I do think firms that fulfill orders from their own dark stores threaten the restaurants, shops and bodegas that are important to the character and livability of city neighborhoods. To compete, small businesses must hire third-party delivery services that take a big chunk out of their profits and ability to survive. And yet, regulation is tough and often winds up hurting the wrong businesses. So, in my opinion, if city folks really care about their neighborhoods, they need to get off their butts and walk the few blocks to their favorite take-out places. Stop whining about the incursion of fast-delivery when you’re enabling them with your orders.

I agree 100 percent, Rick. And then there’s the chance you’ll have to jump out of the way of fast riding delivery people that come at pedestrians from all sides.

It all has become so overwhelming across NYC and you are absolutely right, Rick. The customers are enabling this to happen by driving up the demand for instant gratification. However there are consequences and impacts of this, and now it seems like the surging demand won’t subside any time soon.

It was only a matter of time before communities reacted to the influx of delivery bikes and vehicles on their streets and now, increasingly, dark stores taking retail space. Much of this is VC fueled as these companies are not making any money but are damaging other retailers that must try and compete with them. It is not a level competitive field now but, as with many of the VC fueled fads, they will decline as quickly as they have grown when profitability is required. Many European cities are looking at how they can restrict the activity of these companies and communities are asking why they should suffer for the benefit of the few who use their services.

I don’t understand the bodega argument at all. Isn’t convenience the point of the corner bodega? Are customers so lazy that they can’t pick up their own soda and chips? If so, the delivery craze has gone too far.

Neighborhood concerns are entirely valid as are concerns about the environmental and societal damage from these services. In particular, it is concerning that none seem to have found a way to achieve and maintain profitability. So at the moment we have added neighborhood chaos subsidized by VC funds hoping to get rich quick. That simply doesn’t make sense for society.

There is probably a middle ground here as a bit of NIMBY takes hold. And the delivery companies are more likely to ask for forgiveness rather than permission. I expect innovative communities will find a solution to allow for the advancement of innovation while maintaining quality of life.

Delivery in general is a problem for urban neighborhoods and rapid delivery only compounds the issues. In New York or Chicago, for example, neighborhood streets were not designed to accommodate one car per household, let alone a daily stream of delivery vans. Amazon has been testing highrise micro-fulfillment centers in several cities the past few years, to the chagrin of the surrounding neighborhood who complain about the 24-hour traffic these centers generate. And on the retailer side, rapid delivery is not a sustainable business strategy as shipping costs erode profit margins and undermine brand experience to a point where the business could eventually go under.

Most of these services are turning residential areas into industrial ones. We are witnessing the sausage making of change. I ultimately believe that in order to make these work you have to reduce the outbound through a combination of larger unit counts delivered, coupled with Afterpay-like services.

Do the people who want fast delivery also want ultra-fast delivery sites in their neighborhood? There is a trade-off between disruption and convenience. What about the people in the neighborhood experiencing the disruption and not using the service so they do not benefit from the convenience? Personal choice versus the public good needs to be balanced. In the meantime there will be starts and stops and disgruntled people.

It isn’t just ultra-fast delivery. My neighborhood is choked with delivery vehicles now, flying pizza and sandwich shop delivery vehicles promising to deliver five minutes before the food is actually prepared, all of the meal services, etc. If I had a dollar for every Amazon truck that passes by my windows in a week I could afford one of those pizzas delivered by kamikaze-trained teenage delivery kids. Rick Moss has it right. We need to get up and walk, that is if we can negotiate our way through all the folks trying to deliver to us.

As long as investors are willing to pour money into such ventures until a few unicorns emerge victorious, it could be hard to stop as this is what consumers today demand. This is what disruption looks like.

The real question is – which established retailers (capable of investing more themselves) – will take owning the last mile seriously and push these disruptors to the curb?

Delivery is certainly changing the look and feel of neighborhoods. On a recent visit to a large university I was struck (not physically) with the number of Grubhub delivery robots cruising along the campus sidewalks. With the increase in autonomous vehicles (in this case Yandex self-driving robots) city planners will be tasked to rethink urban infrastructure.

The concerns raised by the Rotterdam council are logical. Offering ultra-fast delivery would trigger reckless driving and cause accidents. Speaking of customers, I don’t think they actually expect retailers to deliver in a few minutes. They do need the order asap but not at the cost of someone’s life. Therefore, it becomes critical for the state authorities to develop the right policies and norms to ensure ground-level playing and clarity for the market players. With the right approach, innovative thinking, and planning, any problem can be solved. So can the issues of online delivery. Policymakers should aim at creating the right balance between retailers’ needs and communities’ expectations. They should enable retailers to offer reasonable delivery services while ensuring that no unnecessary nuisance is created in society. Retailers, on the other hand, should analyze which one to treat as a warehouse: dark stores or their physical stores. Again, they can’t establish a dark store as a warehouse in residential areas since it would be a part of an industrial unit. So, I believe the best… Read more »
0
|
0
-   Share

Braintrust
"Can you imagine when the cute little store down the street turns into a shipping station complete with motorbikes and trucks going in and out all night? Yikes."