Will ‘doubling down’ on tech help McD’s disrupt the fast food business? 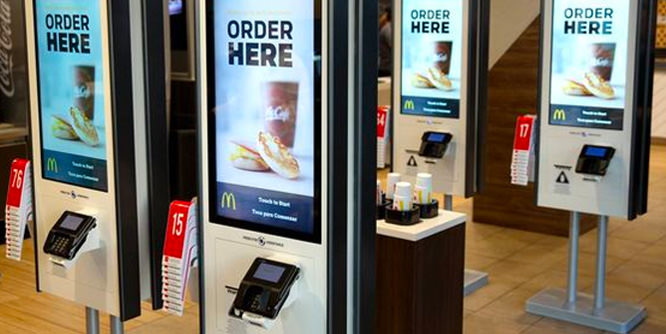 McDonald’s model for serving cheap burgers fast disrupted the food industry in the chain’s early days. Now, the fast food giant is looking to again stir up the market, except this time it plans to use technology to help achieve its goals.

Steve Easterbrook, CEO of McDonald’s, appeared on CNBC’s “Squawk On The Street” show yesterday and said the chain is “doubling down” on technology, such as kiosks in stores to accept customer orders as well as offering online ordering for pickup or delivery.

Last year, McDonald’s announced plans to add touchscreen kiosks and roll out table service to all 14,000 of its restaurants in the U.S.

Mr. Easterbrook also touted the success of the chain’s home delivery tests using Uber Eats. Knowledge gained from a 20-location test in Miami that was then expanded to 200 restaurants has proven invaluable as McDonald’s deploys the program on a much wider scale, he said. He cited accessibility as a benefit, with 75 percent of the U.S. population being within three miles of a McDonald’s.

While in the “early, early days,” according to Mr. Easterbrook, McDonald’s is using digital technology to help move beyond its restaurants in its efforts to be “customer obsessed.” He pointed to mobile order and pay technology and adding a loyalty program to its app as ways the chain is looking “to make their experience with McDonald’s friendlier, more convenient or more fun.” The chain is looking to use digital interactions with customers to gain more insights and improve performance.

DISCUSSION QUESTIONS: Will McDonald’s investments in technology help it disrupt the fast food industry? Which of the chain’s tech investments are most likely to pay dividends for the chain?

Please practice The RetailWire Golden Rule when submitting your comments.
Braintrust
"This is not a disrupter, but rather a natural step in exploring potential enhancement to business."

"McDonald’s is the fast food industry, it’s not in a position to disrupt the category."

"Some company and some technology will disrupt the industry. I’m not sure it will be McDonald’s. "

15 Comments on "Will ‘doubling down’ on tech help McD’s disrupt the fast food business?"

While I would stop short of calling McDonald’s deployment of technology a “disruption,” I would say that they are thoughtfully interpreting changes in consumer preferences and responding by deploying relevant technologies in a thoughtful, methodical way. It’s hard to say which tech investments will ultimately prove to be most valuable, but McDonald’s approach to “launch and learn” is commendable.

I agree with you that “launch and learn” is the right approach for them. Whether or not they are the disruptor, they are certainly on the leading edge of using retail tech. Customers who like it use it, those who don’t go to a human. Retailers more generally need to take a similar approach, even if it means taking small steps to pilot projects like this. Giving customers options is a good move.

McDonald’s investments in technology will be valuable to the entire fast food industry, but technology alone won’t bring customers through the doors. McDonald’s needs to offer food that consumers want to eat. And so far, that has proven to be the company’s biggest problem.

Exactly Max. Their food for me is just horrible, except for a few breakfast items.
There are so many other better choices to eat and, for the life of me, I cannot understand how they can continue selling lousy food when other competitors have upped their games.

I am not sure we are talking about disruption here. To me, it is more like progress. I have visited fast food restaurants in China, Czech Republic and Austria (not just McDonald’s) and found various operators, including McDonald’s employing technology. In France, McDonald’s has had kiosk ordering for at least five years.

Bravo for McDonald’s for moving forward, but they are not the only ones.

Disruption is by far the most exaggerated marketing term in circulation today. An overstatement and a cliché. Drop it.

McDonald’s has created a mature market and is beginning to adjust to their lack of brand distinctness.

Technology will help them by reducing the human interaction that McDonald’s FEEDERS seem to covet. So I would expect a bounce in preference. But it will be short lived.

Fast food is a level game today. So far the players have not recognized what brand identification truly represents. So they each try to out-menu the other players. As if ANYONE ever chose any of them based upon how GREAT the food is. My God.

Some company and some technology will disrupt the industry. I’m not sure it will be McDonald’s. They are very smart for investing and experimenting with technology. If they don’t, one of their competitors will. Chance are, one of them (or many) are already working on it. Companies, not just in the food or retail industry, get disrupted because they can’t see what’s coming. They don’t work on staying current or thinking forward. They don’t take new ideas from potential competition seriously. I think McDonald’s is a role model for pushing ahead, being innovative and trying to protect themselves from disruption. Finally, all companies and any industry should recognize that one of the greatest disruptors isn’t technology — it’s relevance. Stay relevant or be disrupted!

McDonald’s has a 45,000 square foot innovation lab near their headquarters that focuses not only on technology, but also on menu innovations from around the world. It’s hard to know which new developments will benefit the company, but give them credit for trying.

They should make better use of that 45,000 square feet and start creating much better food!

Using technology makes sense as long as customers use the technology and maintain or increase purchases. The option of interacting with a human at McDonald’s is a valuable safety net as the tech solutions are rolled out. I agree with the others who suggest this is not a disrupter, but rather a natural step in exploring potential enhancement to business.

I’m not sure about disruption but maybe leading the way in new areas of customer service. Several chains including Wawa already use kiosks for ordering their meals but pickup and delivery is a good idea as well as a rewards program. The bad news for McDonald’s is that none of these are groundbreaking and competitors can follow suit very quickly. Good quality food, menu innovation and good customer service are still important to fast food chains staying relevant.

Maybe not a disruptor but I give them an A for effort. They are still in the game and still trying new things. For my 2 cents.

As McDonald’s lead the explosion of the fast food industry in the early days, now they are leading the next trends in customer experience in restaurants. Once consumers become to expect the new technologies introduced by McDonald’s that make the fast food experience faster or better, other chains will be forced to follow. For many years, they have been testing new menu items and technology to determine what makes sense to roll-up in the U.S. or globally. They tested kiosks in Europe with positive results before they tested them in the U.S. Now they are on an aggressive rollout strategy in Europe and the U.S. McDelivery has been tested extensively in many Asian countries, primarily in markets with heavy use of motorcycles/mopeds for delivery. Apparently, it is proving to be quite successful and now they are testing delivery in the U.S. I applaud McDonald’s innovation in technology and their testing strategy makes sense. I believe the kiosk will be the game changer for McDonald’s by lowering the labor costs. McDonald’s focus on customers and optimizing… Read more »
2
|
0
-   Share

If McDonald’s does not use technology to decrease costs and improve customer service, their competitors will. By McDonald’s embracing technology, they can be a leader and disrupt the fast food industry. As cities raise the minimum wage, McDonald’s needs to cut costs since their customers are unlikely to pay more in such a competitive industry.

The ordering process is probably where McDonald’s will get the most benefit. The current process can take some time as consumers may not be aware of the choices available and they need to think through the questions posed by the associate. By making this process electronic, confusion and time spent by the associate will be avoided.

Esterbrook is focused on being “customer obsessed”, a vision that will keep McDonalds leading the fast food industry,

McDonald’s is the fast food industry, it’s not in a position to disrupt the category. It is in the position to evolve consumer interaction and convenience, and I’m certain that if any of the technological introductions help with the restaurant’s bottom line, they will be adopted by all QSR.

Braintrust
"This is not a disrupter, but rather a natural step in exploring potential enhancement to business."

"McDonald’s is the fast food industry, it’s not in a position to disrupt the category."

"Some company and some technology will disrupt the industry. I’m not sure it will be McDonald’s. "