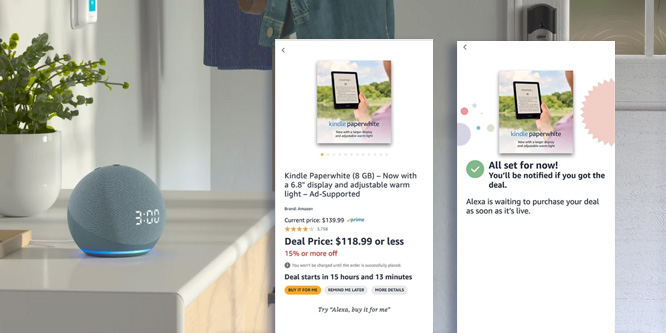 Alexa will now notify Prime customers up to 24 hours in advance of upcoming deals as Amazon.com seeks to pack more value as a shopping tool into its nearly eight-year-old voice assistant.

Eligible items for advance notice include those on the Alexa user’s Amazon wish list and in their shopping cart, or items marked “saved for later” on the platform.

When the feature is enabled, a Yellow Ring light or a pop-up notification appears on the Echo device. Asking “Alexa, what are my notifications?” prompts Alexa to detail which deals have become available.

Users can further ask, “Alexa, buy it for me,” to automatically order the item when a deal becomes available.

The new feature complements Alexa’s existing shopping tools, such as Reorder Notifications, which notifies shoppers when essentials frequently purchased from Amazon may be running low. Adding items to shopping lists and answering questions on items are also commonly-used shopping features.

Vixen Labs’ “Voice Consumer Index 2021” encouragingly found 30 percent of U.S. respondents using their voice assistant daily and 58 percent using them at least monthly. Consumers are still mostly using the devices for music, news and weather. Around shopping, half of U.S. respondents regularly or sometimes use their voice assistant to search for info on products and services, 40 percent to find information about brands and a quarter to make purchases.

Voicebot’s “Voice Shopping Consumer Adoption Report 2021” showed 17.5 percent of U.S. adults have used voice shopping at least once, up from 8.2 percent in 2018. Sixty-three percent, however, are unlikely or very unlikely to use voice commerce.

Voicebot said in the report, “We see similar trends in the mid-1990s related to web adoption. Consumers can imagine how they would use something until they do and then adoption ensues. So, voice shopping is growing but future growth will hinge on greater awareness and a shift in the perceived benefit of speaking instead of tapping or clicking. There will also need to be more supply of voice shopping experiences. Few of these actually exist today.”

DISCUSSION QUESTIONS: Are early notifications on deals the type of feature that will encourage consumers to use voice assistants more frequently as a shopping device? Have the barriers to voice commerce changed?

Please practice The RetailWire Golden Rule when submitting your comments.
Braintrust
"If early deal notifications are exclusive to Alexa, more consumers will embed this voice assistant into their shopping habits. "

14 Comments on "Will early deal notifications bring shoppers to Alexa?"

Our Alexa speaks randomly and it’s creepy, so I like that advance notifications for this program are announced with a yellow ring light instead of Alexa blurting them out when she senses someone is in the room.

Alexa currently keeps me informed about auto-shipments, which I like, and occasionally recommends random product, which I don’t. But if the items Alexa recommends are on a shopper’s wish list, or things that are frequently purchased, then I think they will welcome these suggestions. The ability to instantly buy it makes it easier all around. This is a step in the right direction to encourage Amazon customers to shop via voice.

Now it’s clear – Amazon and Alexa aren’t creating market power with voice ordering. If they were, Amazon wouldn’t be taking what appears to be a desperation move.

That’s right, this looks desperate on Amazon’s part. And it won’t work. No. Shoppers aren’t going to flock to Alexa because it will reveal Amazon deals 24 hours early.

Doug, Respectfully, tweaking is never a sign of desperation. First they got people to buy the device. Next they began to tweak form, features, and functions. Now, they are experimenting — and I very much doubt this will be the only attempt — to test how much “push” from Alexa the market will bear. Looks like smart product iteration to me, not desperation. Remember people used to swear up and down people would never stand on the street, under a bright light, and take money out of a machine. Now, ATMs may go away one day as we move to a cashless society, but they clearly transformed the way the majority of consumers “learned” how to rethink and use banks. I can also remember an FMI meeting where a featured speaker said supermarkets had nothing to fear from hypermarkets because, “Consumers will never buy motor oil and olive oil at the same time. It’s never going to happen!” Well, that prediction didn’t exactly hold up either. My point is consumers are a lot more flexible… Read more »
0
|
0
-   Share

Early notifications prunes back steps that consumers would otherwise need to take to search for or become aware of deals, providing a smoother customer experience. With that, I expect consumers to use voice assistants as shopping devices more frequently.

While not yet changing drastically, I’d say this certainly helps minimize the barriers to voice commerce.

Great idea, as long as it doesn’t talk to me. Give me yellow lights and pop-ups. No noise please.

Voice commerce has huge upside and will continue to grow at a nice, steady CAGR for the foreseeable future. I see top-up shopping to be Alexa’s short term winner, so reorder notifications are spot-on from a strategy standpoint. But I agree with the others, don’t talk to me — simply provide a warm and inviting reminder.

If early deal notifications are exclusive to Alexa, more consumers will embed this voice assistant into their shopping habits. Alexa’s helpful heads-up gives consumers more occasions to save money on items they want.

Several barriers to voice commerce adoption have changed. Consumers of all ages now feel more comfortable with e-commerce, and they expect ease and speed.

The barriers to voice commerce are in the process of changing. I’m still bullish on the long-term prospects for natural language interfaces and voice-activated shopping. It won’t be the norm tomorrow, but give it 10 years and it will be a critical node on a consumer’s personal digital network. As to this particular offer, it all depends. If the number and kind of notifications are limited by the consumer, and those limits are honored by Amazon, I think this is a great idea. If we enter a Brave New World of Alexa Spam, it might kill the acceptance of voice-activated technology for a decade.

It has been a slow adoption cycle for voice commerce. I don’t see advanced notifications being the tipping point for the channel, but I do think the consistent build will drive consumer behavior change over time. I like the re-order feature which anticipates usage/consumption patterns and prompts re-purchase. I think the future of voice will be as more of a concierge service taking the place of social media to alert you to connections’ birthdays and special events — thus driving gift purchases.

Voice assistants need to become more proactive, while not being intrusive, to gain traction with consumers. If Alexa is delivering advanced notice of new deals for products on a customer’s wish list or saved cart, then this will reduce friction for that shopper. Eventually, this forms a habit and could result in those shoppers buying from Amazon more frequently, all due to Alexa! However the details are in the execution. Providing a yellow ring for a notification of a deal is a good choice – just having Alexa start talking at random times when it detects someone in the room would have been a creepy action!

This speaks like a last attempt to make voice shopping buzz-worthy again. Alexa was thought to redefine the future of shopping, but this hasn’t happened. Additional notifications will likely do the exact opposite, but providing another annoyance to customers already inundated with ads. There are those customers that love coupons and sales, but legacy retailers have been working away from that. Odd move.

Speaking as one who is entrenched in the “stop nagging me” camp with respect to voice assistants, I have reservations about unsolicited commercial messages. I don’t mind Alexa’s green ring flash when a package is en route so much, so a yellow light that signals a desirable offer might not be so bad … And it might be cool to instruct Alexa to give a heads up when a deal appears on something already on one’s watch list.

The intrusiveness will be a pretty easy sell to advertisers, I’d imagine. Voice commerce will be an unstoppable force by the end of the present decade, but the path to widespread acceptance will depend greatly on Amazon’s determination and ability to equip Alexa’s AI with iron-clad ethics and old-fashioned good taste.

This will work as long as Amazon is careful to create at least the illusion of consumer control. So, if Alexa only tells me what I allow her to tell me, I’ll love this feature. But, if she keeps bugging me she might find herself unplugged. If the rate of messaging exceeds consumer acceptance curve, this will be a disaster.

Alexa is used for a number of purposes, ranging from a necessity to entertainment. Early deal notifications seem to be an intriguing feature to keep customers hooked on its services. It can also be viewed as an incentive for Amazon to encourage Alexa usage and bring in new consumers.

Currently, voice shopping is not a particularly popular way of shopping among customers. Customers, on the other hand, do not prefer to buy a large number of differentiated products from Amazon. They generally buy generic products from well-known brands or items that can be readily returned. So, when it comes to Amazon, I’m optimistic about the future of voice shopping.

Braintrust
"If early deal notifications are exclusive to Alexa, more consumers will embed this voice assistant into their shopping habits. "