Will FAO Schwarz make Target a bigger player in toys? 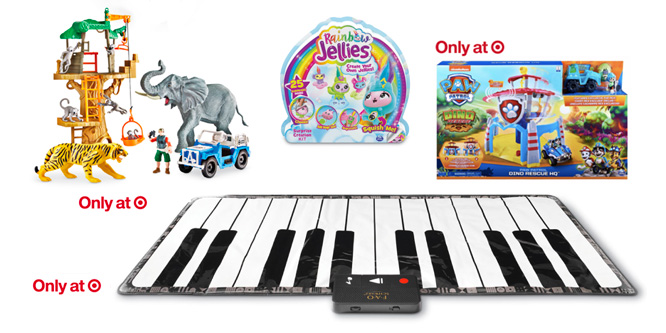 Target, showing no intention of ceding ground in the toys category this holiday season, announced a new collaboration with FAO Schwarz and the introduction of its largest Bullseye’s Top Toys list ever.

The FAO Schwarz collaboration includes a 70-piece toy collection available exclusively at Target. FAO Schwarz’s New York City flagship, which reopened under new owners at Rockefeller Center in 2018, will carry the collection along with more than 300 of Target’s exclusive brands, including Cat & Jack kids apparel and Pillowfort home collections.

The Bullseye’s Top Toys list this year includes 50 of the “most anticipated toys,” up from 32 last year, among them 19 exclusives from brands like Disney, L.O.L. Surprise! and LEGO. Target said in a statement, “With deals starting this month, guests will find incredible value, with prices starting at just $20.”

Brian Cornell has prioritized baby as one of Target’s growth categories since taking over as CEO in 2015, and the company significantly expanded its investments in toys in 2018 after Toys “R” Us’ liquidation. Last year, Target opened 25 Disney branded in-store shops ahead of the holiday season and have added more in 2020.

Toys have seen strong momentum this year, driven by home quarantining. The NPD Group reported toy sales in the U.S. climbed 16 percent in the first half, with particular strength in outdoor toys and board games.

Target’s push in toys came despite some analyst concerns about the discounter facing heightened competition from Amazon or Walmart in the generally low-margin category. In early September, Walmart announced its 32 hot-toys list and Amazon.com presented a selection of 100 “Toys We Love.” Amazon this year replaced Target as the fulfillment provider for toysrus.com.

In the holiday season 2019, Target saw toys, as well as electronics and some parts of its home business, underperform. Mr. Cornell said on Target’s Q419 analyst call in early March, “As we focus on key items next year, we want to make sure we’re buying to the depth required to make sure that we meet the demand in the marketplace during the holiday season.”

DISCUSSION QUESTIONS: Is the toy category more or less important to retail holiday success this year compared to Christmas seasons in recent years? Is Target positioning itself to have success in the category over the holiday selling period?

Please practice The RetailWire Golden Rule when submitting your comments.
Braintrust
"Target is wise to build an exclusive, niche assortment with a premium toy icon. This unique offering could boost word of mouth, sales and loyalty among shoppers."

"Where are the dollars going? In the past decade they have been going to experiences. That of course will change this holiday season."

"...price competition is so intense and margins have been thinned substantially. That’s why Target’s exclusive FAO Schwarz range makes sense."

17 Comments on "Will FAO Schwarz make Target a bigger player in toys?"

The toys category is always a holiday battleground because as well as directly generating sales, it also drives footfall and clicks from family shoppers who spend on all sorts of other things. The problem is that price competition is so intense and margins have been thinned substantially. That’s why Target’s exclusive FAO Schwarz range makes sense. It is point of differentiation and because prices can’t be compared to other retailers it provides a degree of margin insulation. It’s another smart move from Target which I expect to be a holiday winner this season.

Quarantining will have a significant impact on toy sales this holiday season. The key question for Target is, will it have the necessary breadth and depth of toy offerings to compete successfully with Walmart and Amazon?

Walk a typical store and you’ll see the space and inventory commitment that Target has made to the category. While FAO Schwartz may not be a huge volume driver, it certainly provides a halo over Target’s overall toy business.

As to the category’s prospects for 2020, if families are stuck inside for awhile (including kids learning from home), it should be a big season. (Plenty of Baby Yoda toys under the tree, even though the lack of other big theatrical movies this year could be a handicap.) Early results from Prime Days and competing events will be a bellwether for the category.

The toy category is critically important this holiday season given the forced cocooning we are all experiencing. This partnership between FAO and Target is a great idea for both brands. The legendary iconic position of FAO coupled with the discount panache of Targét will be hard to resist.

The toy battle makes sense for Target as a traffic driver during the holidays. This is particularly true as COVID-19 reduces the number of trips shoppers want to make. A compelling toy offer might coax shoppers to stay a while and check a few more things off the list (or splurge on some of those tempting Target impulse items). This isn’t a literal category play, it’s a lure.

Over the years Target has had a lot of success bringing higher end, prestige brands to mass retail. I think FAO Schwarz fits well with Target’s proven model. I do expect the toy category to perform well this holiday. After almost a year of quarantine, distance learning, and missed family events, I believe that parents and grandparents will want to splurge a bit on the kids at holiday. Now they’ll have access to an iconic toy brand at their local Target. I think it will be a win for both brands.

The toy category will be more important this year – it will likely turn into a price war – therefore FAO is a point of differentiation for Target. Will it mean that much to the customer? That remains to be seen.

Baby Yoda will be everywhere this year. Toys are far more strategically significant to holiday sales than in recent years. Parents want to balance 2020’s chaotic effect on family routines by infusing cheer into holiday traditions. Many families will reallocate their unused travel, sports and events funds toward holiday spending, including toys.

Given these conditions, Target is wise to build an exclusive, niche assortment with a premium toy icon. This unique offering could boost word of mouth, sales and loyalty among shoppers who seek quality toys at a reasonable price.

Families need all the help and support they can get in this pandemic driven environment. The pressure is on to make the home front as kid friendly as possible.
Target is already a family shopping headquarters, so toy exclusives amplify Target as a first-stop shopping destination. Another smart move in a long series of smart moves by Target.

Toys are always a highly anticipated category during the holidays and this year is no different, in fact toys will be even more important as families strive for normality. Target is smart to expand its toy offerings and FAO Schwarz has a wonderful reputation for unique toys.

I have questions about this partnership: Will the selection at Target be the toys we have come to expect from FAO Schwarz or, say, Lego sets with FAO branding? I grew up visiting the NYC store as did my children. The addition of Target brands on that magical sales floor doesn’t feel right to me.

There is no reason to have FAO without the magic.

This is an interesting move for both brands. FAO Schwarz needs some volume to keep production and shipping costs down and to some degree to get the brand recognized by new generations of shoppers. Target needs to stimulate additional dimensions of loyalty to keep top of mind when customers need just about anything. Toys, of course, will probably be over-purchased this year as families try to compensate for their children´s happiness in a very unusual year given COVID-19, but consumers will also be second-guessing whether it is wise to buy toys offline where they may have been touched by hundreds of people before being brought home. When I sold toys to Target, the biggest surprise was how easily they let customers complete returns – for no other reason than their child was tired of playing with a toy after two or three days so they wanted their money back to buy something else that might also get returned. So given the backdrop and complications in the sector, I imagine this collaboration will be good for… Read more »
1
|
0
-   Share

I think the category is as important as ever but I wouldn’t pin holiday success on it. While I think FAO Schwarz is a powerful name and the brand definitely speaks to a segment, I think more partnerships with YouTubers and celebrities and collaborations on product development would be much more exciting for slightly older kids (7+).

If mom is familiar with the toy, she’s honestly probably going to Amazon. Target will need to get in front of this with visual merchandising in-store, strong web UX, possibly more curation of items and insight into the tips the guest needs to make informed decisions on toys. It will be fun to see how this “plays” out!

Where are the dollars going? In the past decade they have been going to experiences. That of course will change this holiday season. But the big impact is from electronics. What eight-year-old wouldn’t want a phone for Christmas? (Whether they should have them is an entirely different discussion.)

What FAO brings to Target is the feeling of fun. The BIG piano, the train layouts, the touch and feel of toys. If they can duplicate this, they can generate traffic. If it is just a library of toys they should focus on other activities.

A second thought that has more to do with the toy season than FAO uniquely: Under the current economic conditions, if I bought my kid five toys last holiday season, am I likely to buy four, five or six this holiday season? And most importantly, will my kid know the difference?

Forget the unemployment rate. Over 5 million people have dropped out of the labor force compared to this time last year. That is people who are not looking for jobs. Thirty-million people are on unemployment in one way or another. Are they going to buy that extra toy?

Toys will always be a part of the holiday magic.

The toy category has and always will be a significant part of the retail holiday success story. Considering the large gap left by the Toys “R” Us bankruptcy, there have been many players, including Amazon, Walmart, and Target who have looked to fill the gap.

Everyone loves a good story, and we were all glad to see the return of FAO Schwarz’s New York City flagship back in 2018. There is a certain magic and excitement that comes along with the holidays and the toy category will continue to be a big part of the experience. We should also expect plenty of younger TikTok and Instagram influencers to be a part of the cross-promotional magic.

Brand equity matters and Target under Brian Cornell understands that.

Braintrust
"Target is wise to build an exclusive, niche assortment with a premium toy icon. This unique offering could boost word of mouth, sales and loyalty among shoppers."

"Where are the dollars going? In the past decade they have been going to experiences. That of course will change this holiday season."

"...price competition is so intense and margins have been thinned substantially. That’s why Target’s exclusive FAO Schwarz range makes sense."