Will IKEA import its c-store concept into the U.S.? 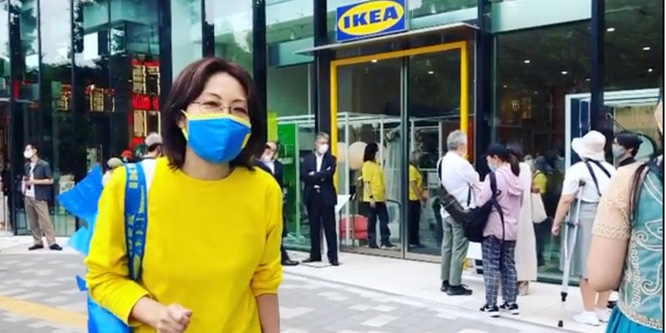 The Japanese wing of Swedish furniture retailer IKEA has opened a store in Tokyo with one foot in a new vertical.

IKEA’s new convenience store concept is located in Tokyo’s fashionable Harajuku neighborhood, according to Vice. The store consists of two floors divided up into four sections. On the first floor is the “Swedish combini,” (“combini” or “konbini” being the Japanese name for a 24-hour convenience store) which sells products like ramen and craft beer and features a coffee shop/ice cream shop and bakery. The “Sleep” and “Organize” sections are next to the convenience store portion and feature bedroom furniture and shelving. The second floor contains the “Relax” and “Cook and Eat” sections where customers can buy furniture, such as sofas, as well as kitchenware. There is also a second cafe upstairs that serves Swedish food. The store has 1,000 products for sale.

Convenience stores are a booming industry in Japan, with more than 50,000 of them in the country. Japan has more than 20,000 7-Eleven locations alone — the most of any country — and is home to that chain’s parent company.

The move from IKEA comes as it continues trying to find ways to blend itself into urban infrastructures and meet the needs of city dwellers. IKEA is known to customers for its massive, labyrinthine big box stores. Beginning in 2018, however, the chain began undertaking a major reset which consisted of an urban focus, improved delivery, in-home setup options and other enhancements.

In the course of pursuing this reset, IKEA began launching small concept stores in major urban markets like New York City, as reported by CNBC. In April of 2019, the chain had plans for 30 stores in city centers nationwide.

IKEA has also explored more experimental offerings to get the urban customer interested. In February of 2019, the retailer began piloting a furniture rental service in Switzerland.

While IKEA itself has been exploring smaller concepts, IKEA’s parent company, Ingka Centers, is thinking big. The global shopping mall owner has announced that it plans to open malls in major U.S. cities, according to Reuters.

DISCUSSION QUESTIONS: Does it make sense for IKEA to expand into the convenience store space as it moves to more urban settings, and do you see this concept eventually making its way stateside? Should those in the c-store space be concerned about the entry of a player like IKEA into the business?

Please practice The RetailWire Golden Rule when submitting your comments.
Braintrust
"This makes perfect sense for IKEA as an entry into expensive urban settings. "

"What took them so long? Driving to the big box IKEA stores is an event, at least a half-day of time committed to drive and wander in search of treasure."

"The brand extension in the U.S. is more of a stretch than a natural fit. I don’t expect IKEA to bring this format here in the foreseeable future."

14 Comments on "Will IKEA import its c-store concept into the U.S.?"

IKEA has a cultish following and customers will drive a long way for a destination shopping trip to an IKEA store. The real estate cost in urban areas is too expensive for a massive IKEA store and a convenience stores space is a great way to make IKEA products more accessible to urban shoppers. If IKEA can make the economic model profitable for a small space, we will likely see them expanding into many large cities.

Furniture rental is a recognition of what business they are in. Much like auto makers investing in rideshare platforms because they recognized they are in the business of transportation, not automobiles.

If IKEA is selling their delicious Swedish meatballs, I’m in! Seriously, this is quite a departure from their business. I don’t even see this as a vertical. When I think of a convenience store chain, I think small, multiple locations and quick transactions. If the goal is to provide a smaller version of the typical large (big box-like) store, strategically placed in urban areas, then I can see the opportunity. But adding convenience store items pushes their business. IKEA leadership is smart. They know what they are doing. I’m sure they will test (and test and test) to ensure their investment will pay off. Looking forward to seeing where they are in the next two to three years with this concept.

I don’t see the brand extension very clearly. It’s tough to enter a new format and even the big boys like Walmart (remember Walmart Express?) didn’t find success in the convenience sector. Honestly, it would make more sense for IKEA to open a restaurant concept based on their success in their cafes.

I think it makes sense for IKEA to modify their approach to the market. They already have fast casual and quick service restaurants and a limited food selection so it isn’t a great leap. As they move to more urban settings their gargantuan footprints need to shrink, they need to employ a showroom concept and add a twist to drive traffic. I believe IKEA should export this Japanese proof of concept to the U.S. market in major metropolitan markets as their cult following will draw traffic.

This makes perfect sense for IKEA as an entry into expensive urban settings. It’s localization. It’s best-use-of-space. It actually reminds me of MUJI, with their very curated assortments ranging from apparel to home to gifts. MUJI offers a terrific shopping experience. IKEA could do very much the same with their range of products. And they probably have great showrooming opportunities in smaller format stores.

I agree with other comments that convenience is a stretch for their brand, and therefore a risk, to be sure. However there may be an underlying motivation here, at least for the foreseeable future: is it possible that they could add foods that would enable these smaller format stores to be classified as “essential” if more shutdowns come? A second big wave of COVID-19 cases looks highly likely, and many experts predict a series of waves for the next 18 months or more, until a vaccine or treatment becomes available.

No one can accuse IKEA of lacking creativity, a necessary ingredient for long term success. Their c-store concept is ideal for Japan, but the U.S. is a different retail environment from shopping behavior to density of population and transportation network. The brand extension in the U.S. is more of a stretch than a natural fit. I don’t expect IKEA to bring this format here in the foreseeable future.

What took them so long? Driving to the big box IKEA stores is an event, at least a half-day of time committed to drive and wander in search of treasure. Popping into a neighborhood local, curated IKEA store sounds both exciting and easy to find a product or two one did not know they needed. IKEA is both a brand and a lifestyle, filling the huge convenience gap not fulfilled by Amazon Go or 7-Eleven type c-stores.

The combination of a convenience food, furniture and kitchenware store is strategically attractive. The c-store feature is a recognition that food still drives many shopping visits. Walmart proved this concept at the end of the last century when it developed the Supercenter. In addition, the alternative of a smaller footprint gives IKEA a format that can fit a variety of retail environments.

Never underestimate the strength of the IKEA brand. Recall Borders and Barnes & Noble scoffing at the idea of a virtual book store launched by Amazon. C-stores should not be complacent here.

Many of the same reasons why the micro Target locations are performing so well will drive the success of micro IKEA – curated convenience for major college campus locations and urban downtowns + their excellent packaged and fresh food assortment + their signature sharp pricing. IKEA has also excelled at global logistics. I can’t wait to see them in places like Stadium Village in Minneapolis and Midtown Atlanta!

As a massive destination store, IKEA has some parallels to Costco. The idea of a small footprint feels antithetical to both stores’ emphasis on scale and assortments. In the case of IKEA, recent reporting suggests real problems executing its e-commerce and curbside pickup businesses during the pandemic — fixing that would be my priority if I ran the company.

Anyway, last things first: no they needn’t be concerned, at least not any more than they would with any other entrant (saturation is always a concern, but I’m not sure this sector is there yet). I suppose the “makes sense” question is meant independently of the higher-than-normal urban risks of the past few weeks, since it would be remarkably ill-considered at this very moment: like any large company, IKEA has the luxury of being able to experiment. Whether or not their brand equity would extend to this particular format I don’t really know. As with most smaller/urban formats – from a whole slew of companies (ranging from Target to IHOP) – I have trouble getting excited, but I’m always willing to accept “learning experience.”

It’s likely IKEA’s c-store move is a test phase. IKEA is known for acclimatising their strategies to local cultures and communities. Considering 7-Eleven is huge in Asia, it wouldn’t surprise me that IKEA is testing this in Japan in order to learn from customer behaviour and therein expand on a global scale — if it works.

As for the competition, IKEA’s value proposition appeals to everyone, even the person with the “thinnest wallet.” They control the entire supply chain. Provide high quality products at a lower price.

7-Eleven should indeed be concerned if IKEA plans to move into the c-store industry. But will this concept move stateside? Consumer culture is so different in the U.S versus Asia. IKEA’s brand perception is also completely different in these two markets. I’m hesitant that this test will give the go-ahead for a stateside expansion, or into different international markets if proved fruitful.

Braintrust
"This makes perfect sense for IKEA as an entry into expensive urban settings. "

"What took them so long? Driving to the big box IKEA stores is an event, at least a half-day of time committed to drive and wander in search of treasure."

"The brand extension in the U.S. is more of a stretch than a natural fit. I don’t expect IKEA to bring this format here in the foreseeable future."