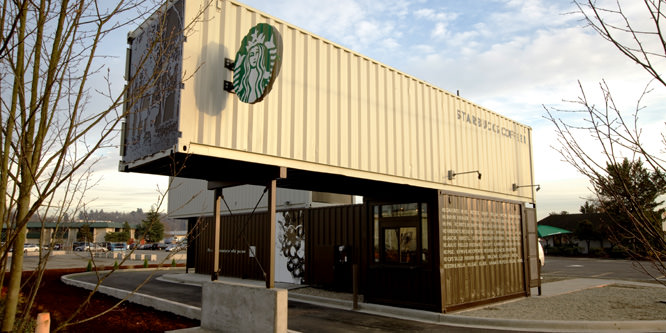 Looking for ways to eliminate bottlenecks caused by the popularity of mobile orders, Starbucks will open a dedicated mobile order and pay-only store at its Seattle headquarters.

The location will only serve Starbucks employees who’ve placed via the Mobile Order and Pay app. A large pick-up window offers a view to baristas preparing the orders, according to Reuters. Starbucks’ headquarters has two cafes that serve its more than 5,000 employees.

Introduced in 2015 to help customers avoid lines, Mobile Order & Pay accounted for seven percent of U.S. orders in the last quarter, up from three percent in the prior year. Those ordering receive an estimated time when they’re beverage will be ready and then either head to a pick-up location or hear their name called out by a barista at that time.

Wrote Andy Adams, senior vice president, global store development, Starbucks, last week in a note to employees, “An early experiment, this first of its kind experience will be tailored specifically for convenience and we expect to learn from this location.”

On its first-quarter conference call in January, Starbucks’ officials blamed long lines due to mobile orders for its weakest quarterly comp gain since 2009. The waits at its higher-volume stores at peak times caused some customers to walk out.

To address the problem, Starbucks has focused on workflow, including adding one or two more baristas dedicated to mobile orders at high-volume stores during peak hours. The company is also testing sending text alerts to customers when orders are ready.

While many retailers are investing in BOPIS (buy online, pick-up in-store), few are pushing pick-ups through apps.

In preparing to launch mobile order and pay this fall, McDonald’s is taking several steps to avoid Starbucks’ mistakes, according to a report from the Chicago Tribune. These include shortening assembly lines to accommodate greater volume during peak periods, adding kiosks for quick mobile scan, and adding dedicated curbside pickup.

DISCUSSION QUESTIONS: Are mobile order and pay-only locations a wise idea for Starbucks? Will pick-up bottlenecks caused by mobile or online orders be largely a food/beverage headache or will it eventually become a big challenge across retail?

Please practice The RetailWire Golden Rule when submitting your comments.
Braintrust
"A good idea perhaps, but the road between the concept and a successful implementation is going to be bumpy."

"...will allow for the load balancing of orders — smoothing out the experience for customers and baristas. Smart idea."

"I would be shocked if this was a move to cope with the success of the mobile click-and-collect activity rather than being a strategic rollout."

As mobile orders grow retailers will need to adapt to meet customer expectations, which are that there will not be a line when they arrive at the store to pick up their orders. If retailers cannot meet these expectations, they should not offer mobile ordering.

Agree. But we’ve seen this train wreck coming. Starbucks risks a no-win — attracting consumers with the myth that big conveniences in life are free.

We should demand of ourselves that we charge for convenience. Fundamental economics….

Having one or more dedicated mobile order and pay-only stores, near existing dine-in Starbucks locations, will allow for the load balancing of orders — smoothing out the experience for customers and baristas. Smart idea.

Perhaps the best location for these sites would be next door to some of their current ones. Instead of improving the customer experience the mobile ordering app has made it worse.

One of the issues with a drive-thru only location is queuing. What do you do with the customer who has shown up too early? Where do they park? How do you get their order to them? The same is true for the customer who is a few minutes late. Yes their order is ready but now has been sitting there for ten minutes cooling off or warming up.

A good idea perhaps, but the road between the concept and a successful implementation is going to be bumpy.

Test, experiment, measure and iterate. Starbucks is working through the digital transformation as any retailer should be doing. This is a new world and the instructions can’t be found in a textbook (yet!). Learning and adapting is key to success. Finding a set of solutions that continue to meet the ever-expanding expectations of the digitally-empowered shopper requires constant innovation. I tip my hat to any retailer that is actively trying new initiatives to lead the way. Their customers will reward them with their wallets (e-wallets!).

I would be shocked if this was a move to cope with the success of the mobile click-and-collect activity rather than being a strategic rollout. In-store pickup was just stage one. This is stage two.

This is a growing trend and, in my opinion, it is a step in the right direction. We are seeing many shopping malls and plazas set up consolidated, click-and-collect stations in the parking lot or near the property. We are also seeing many urban, small-footprint locations being considered for click-and-collect for larger suburban retailers.

The challenge that Starbucks is faced with is that they essentially have two categories of customers. One being those who are on the go, commuting and following the mobile BOPIS strategy. The other who is not in a rush and is seeking to spend a bit of time and have a good experience or work remotely out of Starbucks.

The bottleneck is a headache for a company that wants to go back to their experience-based Barista/coffee house roots. However, the company should consider separating their brick-and-mortar model out into two separate operating entities. One exclusively for the rushed loyal mobile customer who is on the go. This could be a smaller-scale set up. The other operating model is for their more “luxury” coffeehouse clientele that is seeking a transporting experience, or to settle in at the cafe for a while.

Until these two groups are separated the bottlenecks and inefficiencies will continue, particularly with the ongoing proliferation of Starbucks mobile usage.

Business models are changing as fast as the customer’s imagination. Imagine what this same mobile order and pay model would look like for grocery stores. We’re going to see a lot of trial and error as customers decide on their preferences and retailers respond.

Retailers across industries are continuing to see a rapid increase in mobile shoppers with each passing year. In today’s digital age, consumers have come to expect a shopping experience that allows them to make purchases quickly, easily and while on the go. The food and beverage industry in particular has felt the impact of this trend, and Starbucks’ move toward mobile ordering is a great example of the growing needs of the mobile customer base. Simply allowing shoppers to make mobile orders is no longer enough — retailers must ensure the overall experience is streamlined and convenient for the customer.

Starbucks’ decision to create mobile order and pay-only locations will help them do just that. By paying attention to every step of the mobile shopping experience, Starbucks is positioning itself as a brand that prioritizes the needs of consumers. Retailers in all industries — not just the food and beverage industry — will need to follow suit and figure out how their own customer experience can be tailored to all shoppers across all channels.

Retailers have to satisfy different customer experience needs and mobile ordering is one of them. Trying and learning is an important part of modern retailing and large multi-year designed concept store initiatives don’t fly in today’s world. Quick tests, learning and adopting what is learned is the only way to succeed. Starbucks is in the business of selling coffee experience and it needs to continue to innovate to keep ahead of competition.

Getting it right will be the trick but as long as that is what the customer wants, retailers will try to meet expectations. So far, my experience with Chick-fil-A order and pay has been great. I place my order then I drive to Chick-fil-A, let them know I’m there, walk up to the pick-up counter and my food is usually just a minute or two coming up. Yes I do have to get out of the car but frankly I don’t mind that if the pick-up process is convenient.

This is an example of the store as distribution center at its most extreme! A great idea to serve one portion of Starbucks’s fractured customer base — the on-the-go, mobile customer who has no intention of staying in the coffee shop and lingering. As someone who has been both types of Starbucks customer, it seems like a great idea to split into two types of physical storefront. This becomes a question of real estate cost, however, as the mobile order pickup location has to generate enough business to justify the location. And it would seem the locations where this makes the most sense may be those most expensive real estate as well!

By operating mobile order and pay-only stores, it relieves the stress on the regular Starbucks locations. If they plan on operating these locations near or next to existing locations, it makes transferring staff during peak hours very convenient. Bottlenecks should mainly remain a food/beverage headache because of the time required to prepare the orders compared to retail where they only need to hold the item(s). If executed correctly, This idea of Starbucks can become very successful.

I think as with any model this is an indication that Starbucks is refining its BOPIS offering. It seems that some of the bottleneck that it has now comes from different types of customers coming together (those who have ordered by the app, those waiting to order, etc.) and how the staff/store deal with what. Certainly with a mobile order/pay-only store the focus now has to be on how the staff will respond and prepare orders quickly enough, especially at peak times. This type of experimentation and learning may prove valuable to Starbucks all over, depending on the insights gathered.

Can you think of an Alexa skill more useful than mobile ordering from your “smart car”? Cars will be like data centers on wheels soon. Enough said.

BOPIS is how the voice-search economy works in part, as signs of a mobile/post-mobile experience are starting to show not just in IoT, but when 5G mobile speeds come, the result is more transformative than many of us can imagine.

Amazon basically plans to make mobile sign-in the new “checkout,” and their initiative of using DASH virtually on mobile is rather intuitive. That Starbucks is leveraging this is therefore not surprising.

Starbucks already possesses one of the most useful apps in terms of loyalty-marketing integration. Mobile ordering and pre-pay in theory would reduce line-ups, already a big pain point for getting our cup of Joe!

Braintrust
"A good idea perhaps, but the road between the concept and a successful implementation is going to be bumpy."

"...will allow for the load balancing of orders — smoothing out the experience for customers and baristas. Smart idea."

"I would be shocked if this was a move to cope with the success of the mobile click-and-collect activity rather than being a strategic rollout."