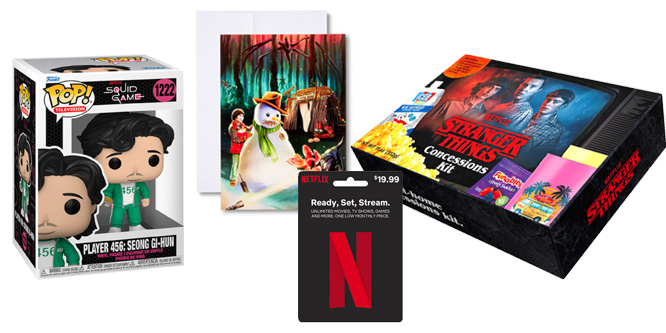 Walmart plans to open Netflix Hub shops selling merchandise from the streaming platform’s films and television series in more than 2,400 U.S. stores as it seeks to build on an online-only deal introduced last October.

“The Hub promises to bring fans closer to the shows and movies they love,” said Frank Barbieri, VP, content and digital, Walmart U.S., in a blog entry. “Walmart customers will find even more music, apparel, collectibles, games and seasonal items from all their favorite shows and films including ‘Stranger Things,’ ‘Squid Game,’ ‘The Witcher,’ ‘Guillermo del Toro’s Pinocchio,’ ‘Glass Onion: A Knives Out Mystery’ and more.”

Walmart will also sell a Netflix streaming gift card at $19.99.

Beyond sales, Netflix in-store shops could be traffic driver for Walmart, similar to Target’s 225 Disney in-store shops as well as Macy’s recent installation of Toys ‘R’ Us shops across its doors.

The gift card sales could help grow subscriptions for Netflix which saw declining subscriber numbers earlier this year for the first time. However, Netflix, which has produced over 1,500 original titles since it began creating original content in 2013, is increasingly looking to leverage its content to drive licensed merchandise royalties similar to the major studios.

Josh Simon, VP of consumer products at Netflix, said in a statement, “When we launched the Netflix Hub a year ago, we knew it was something special and we are thrilled to expand on this partnership bringing our fans even closer into the worlds of their favorite shows or films.”

DISCUSSION QUESTIONS: What will Netflix Hub in-store shops do for Walmart? Do you think Walmart will open other store-within-a-store concepts along the lines of Target?

13 Comments on "Will Netflix send customers streaming into Walmart’s stores?"

Licensing is a major opportunity for Netflix to improve revenue at a time when organic subscription growth is more challenging. Walmart is a great distribution channel because of its reach with family shoppers. So I see this as a win-win. Of course, this alone isn’t going to move the dial enormously at Walmart but it is all part of creating more interest in stores and improving non-food penetration and sales.

Netflix needs to drive revenue beyond the hyper-competitive streaming world, so selling merchandise makes good sense. While this will be a nice addition to Walmart stores I don’t see it driving traffic — Netflix will benefit from the considerable traffic Walmart stores already receive.

The breadth of this offer is far greater than in-store shops with other retailers. To top it off, they provide an incentive to get more viewers. The move is an example of an actual domino strategy for a company expanding its business.

This is likely a strategy to further position itself against Amazon more than Target. It highlights benefits of a Walmart+ membership positioned against Prime Video, while relying on the advantage of stores as a hub. Netflix has stronger programming than Prime and thus a better draw.

Limited-time product drops will drive store traffic as consumers keep coming back to see what’s new. To maximize sales, the assortment strategy will certainly align with Netflix’s most in-demand content.

Walmart will likely seek more partners for in-store shops to make its abundance of stores even more enticing.

In this initial deal, the win goes to Netflix. Walmart offers massive physical distribution – to the tune of more than 10,000 stores – for the streaming service, in an increasingly competitive and fragmented market. Increasing reach, licensing and merchandising sales must be an imperative for Netflix in order to turn around the negative financial patterns (nearly 9 percent drop in net profit margin YoY). I am interested to see the next step of this agreement, as Netflix is in the midst of rolling out its advertisement-supported service. The retail media opportunity on Walmart.com and the Walmart ad opportunity in Netflix’s ad service have not yet been outlined, but will surely follow.

The Netflix hookup is a standard licensing program, yet Netflix offers a full portfolio of properties to Walmart with one deal. The program allows Walmart to reel in business from multiple demographics and address diverse fan bases. Netflix’s ongoing events and outreach will boost the program without Walmart lifting a finger. All in all a sweet deal.

This is probably a bigger win for Netflix than it is for Walmart. I don’t think there is a huge population of consumers hankering to find Netflix’s licensed merchandise. This will be an incremental play for Walmart’s already strong holiday offer. For Netflix it’s a new revenue source at a time when their subscriptions are in decline and business is challenging.

The Netflix Hub will provide another reason to go to Walmart for the highly digital fans of trending entertainment. While their natural inclination is to shop online on Amazon, this may be a chance to interrupt that pattern and build loyalty among Gen Z. Overall this may not be a huge traffic driver but an opportunity to build engagement and loyalty relative to online competitors.

The Netflix store-within-a-store appears to be different than a move to copy Target’s strategy. I think that Walmart will use data and research to understand where they can become a bigger part of their customers’ lives and provide unique experiences at retail while driving loyalty and sales. That said, technology and entertainment is such a pervasive part of everyone’s lives, this could be the next store-within-a-store. What kind of partnership would work in consumer electronics to counter Target and Apple and uniquely appeal to Walmart’s customers?

Great idea. Brings a level of brick-and-mortar experience to a streaming platform. Selling merch and subscriptions through the Walmart system can be huge. What other chains can Netflix partner with? (Rhetorical question!) There are many!

With just under 200 million paying subscribers, Netflix brings the entertainment opportunity to the Walmart customer base. This is a complete win-win. Netflix is copying Disney’s merchandise business model – which for those not following brings in over $56 billion annually. This is a huge opportunity for pushing the content from Netflix Originals. For Walmart it taps into a strong merchandising opportunity with notable names and shows with recognizable cult followings. Expanding for Walmart only makes sense, especially as they increase the Walmart+ value.

Many big box retailers have been experimenting with store-in-store concepts. In my opinion, Walmart and Netflix have come up with a great initiative.

2. Customers especially arriving to experience Netflix’s curated merchandise will lead to a higher footfall for Walmart.

Therefore, the strategic partnership would be beneficial for both Walmart and Netflix.

Pop culture merchandise has incredible appeal to consumers; I recently observed customers enthusiastically shopping a range of Netflix merchandise in an ASDA store in the UK (a Walmart subsidiary), so think this will draw some foot traffic once advertised. The recent cheaper “with ads” subscription model will invite a new wave of Netflix watchers, so think this is a reasonable strategy for Walmart.