Will parachutes provide drones with a soft landing for home deliveries? 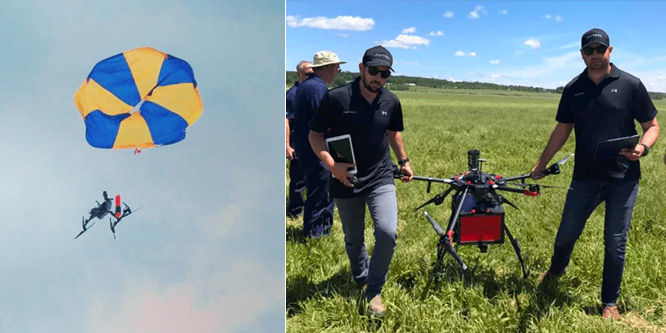 Of the numerous kinks in the process of drone delivery that the tech industry is working out, safety is one of the biggest. A new technological development aims to make delivery drones less likely to plummet and therefore more palatable to the general public.

Drone package delivery company Flytrex has been testing on-drone parachutes, according to a report by sUAS News. The FAA currently prohibits drones from flying directly over people, in most instances. Those drone operators who can demonstrate and validate reliable safety features such as parachutes, however, can apply for permission to fly commercial drones in such scenarios.

Other big players in the industry have been working to make drones a practical reality. Amazon for instance has managed to get limited FAA approval for drone delivery tests but, as Business Insider reports, only has its license to do so for a year, and must submit each new iteration of its delivery drone technology for certification. In June, the tech giant announced that its long touted drone delivery service, Amazon Prime Air, would go live “within months.” The Amazon drones are purportedly able to carry packages up to five pounds and can only deliver within a 15-mile radius from a hub.

While parachutes and other safety enhancements may limit the number of potentially harmful or fatal drone crashes, other factors may still render drone delivery unacceptable.

Depending on how many vendors are managing last-mile logistics through drones in a given municipality, quality of life issues like cluttered skies and noise pollution could become big problems.

Concerns over drones being hacked, hijacked and used for purposes of surveillance, mischief or malice could also become issues. Other safety hazards could also arise, such as dropped packages, which would not be mitigated by technology that prevents the drone from crashing.

DISCUSSION QUESTIONS: Will parachutes on drones created and managed by delivery startups make this technology more acceptable to the public? What do you see as the biggest sticking points with drone adoption, even if the chance of crashes can be minimized?

Please practice The RetailWire Golden Rule when submitting your comments.
Braintrust
"Although there are myriad tactical challenges facing drone deliveries, the least of which are the deployment of parachutes, I actually see a potential future for them."

"Parachutes are the least important barrier to drones."

"Deliveries are being made every day by using our current methodologies."

8 Comments on "Will parachutes provide drones with a soft landing for home deliveries?"

Parachutes are the least important barrier to drones. I can’t see any future in which a municipality like New York or London will allow drones to descend across their cities carrying packages that could be mistaken for or actually contain bombs.

Although there are myriad tactical challenges facing drone deliveries, the least of which are the deployment of parachutes, I actually see a potential future for them in the appropriate areas to mitigate ground-based delivery costs. I do not see a long-term adoption of autonomous ground-based delivery vehicles anytime soon due to too many physical obstacles (traffic, vandalism, etc.).

No one is actually delivering with drones yet, the copy always reads “drone delivery system is in development…” This is one of those tech things we like to talk about ad nauseam but never seems to come to fruition. I’m with Bob: there are too many restrictions to make this happen, parachutes or not.

Deliveries are being made every day by using our current methodologies. Drones are single customer delivery systems. The only real need I see for drone delivery is when roads are not available in remote areas and/or roads are washed out or not passable for some other reason.

I don’t doubt that one day we will see some level of drone delivery but, in the near term, I see this as more of a marketing/PR effort by Amazon to drive home their dominance in delivery. If customers know that Amazon is working on drone delivery, they solidify their position of being the fastest delivery option. Even if other retailers match Amazon’s two-day, next-day or even same-day delivery, they will always be considered slower than Amazon.

I agree with Ralph, there is some great potential for drone delivery, especially to locations where land travel is costly and time-consuming. This would be another benefit to those remote workers who not only work from home, but work from a more rural location. That being said, I think parachutes may cause as many problems as they solve — no control over direction, speed, or ultimate landing site.

News of on-drone parachutes has moved the discussion of grocery home-delivery into the Twilight Zone.

The chances of this ever taking off are remote.

Braintrust
"Although there are myriad tactical challenges facing drone deliveries, the least of which are the deployment of parachutes, I actually see a potential future for them."

"Parachutes are the least important barrier to drones."

"Deliveries are being made every day by using our current methodologies."