Will redirecting its focus from stores help Staples’ top and bottom lines? 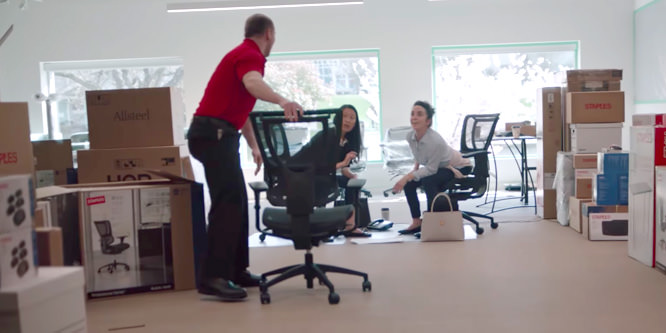 Staples is launching the first marketing campaign in its history that doesn’t focus on the office supply chain’s retail business. Instead, the “Staples – It’s Pro Time” rebranding campaign will feature its business-to-business (B2B) division, which serves a wide range of customers from individual consumers, small and medium-sized companies as well as enterprise accounts.

The national campaign showcases people striving for excellence in a variety of jobs. Staples has launched a 30-second commercial — “Summon Your Pro” — to introduce its new marketing theme. The Staples campaign will also feature digital, print and radio communications in addition to its television spots. The chain will use in-store signage and collateral material to support the effort.

“Throughout the campaign, we believe our customers will see themselves — office managers, small business owners, janitors, consumers, facilities managers, purchasing managers, IT experts and assistants,” said Frank P. Bifulco Jr., chief marketing officer, Staples, in a statement. “The campaign is a reminder that, with the right supply-set, skill-set and mindset, people can achieve anything.”

While Staples has concentrated its marketing efforts on building its retail business in the past, the majority of its revenues come from deliveries to B2B accounts. Advertising Age reports that Staples expects only 20 percent of its business to come from retail by 2020, down from 40 percent today.

“This campaign is initially intended to shine the light on the business-with-business aspect of our company that we’re not as well known for, but is a key part of our growth strategy,” said Mr. Bifulco. “And an important part of our business is not only offering great products, but delivering services and expertise to the hard-working customers who we call professionals.”

Staples’ new campaign, according to Ad Age, is part of the strategy the chain developed after its unsuccessful attempt to acquire Office Depot. Since the deal fell threw, Staples has put more of its attention on capturing market share among companies with fewer than 200 employees. At present, Staples captures less than five percent of that particular market.

DISCUSSION QUESTIONS: Do you think Staples is on the right track with its new rebranding campaign? Will reducing its emphasis on retail have negative consequences for Staples’ B2B business?

Please practice The RetailWire Golden Rule when submitting your comments.
Braintrust
"I suspect B2B has always been their strong suit, and their stores were never really their real center."

"I haven’t been in a Staples in over a year. And when I went it wasn’t to buy supplies, it was to service my computer."

"The decision Staples has to make is what to do with all the outlets they have."

9 Comments on "Will redirecting its focus from stores help Staples’ top and bottom lines?"

You know, to me this is more of a return to the company’s roots. Back when I lived in Boston (in the 1990s) they were building stores like crazy and the stores were almost always empty, even though comps and revenue were strong. Then I found out they’d attribute their catalog sales (this was pre-web) to the closest local stores.

So I suspect B2B has always been their strong suit, and their stores were never really their real center. Now they are obviously competing with warehouse stores like BJ’s (and everyone else), but this is their best bet. Direct sales.

Staples is in trouble. Shopping in its stores is not a pleasant experience and almost every product that they carry can be purchased for less online. The company’s management realizes this and is trying to reposition the brand accordingly. I don’t think it will work. Staples, like RadioShack, is a brand looking for an audience, long after that audience has passed it by.

Small businesses are typically lean organizations and the ability to get the products they need delivered will obviously save them time. If the prices are competitive then this is a great formula. I run a very small business and I can get my office supplies
online, including my printing requirements, which is why Staples is my go-to source.

The decision Staples has to make is what to do with all the outlets they have. If their business passes the percentage mark (whatever that is) where the stores start to become a negative they will need an exit strategy for many of these locations. Getting ahead of this will require forward thinking and execution by Staples.

The campaign is a good one and should help grow their B2B business further. I use Staples’ B2B service and it’s excellent. However, as a Staples customer, I have often witnessed the sales they lose at store level. I have been in many of Staples’ stores locally as well as when I travel and the inconsistency is huge. There are times when I’ve needed an item and I needed it now, or I wanted to see the item before buying it. Then when visiting a store I couldn’t find anyone to help me. And if I did find a sales associate, they couldn’t answer my questions, and the response from the store associate that was most upsetting was, “well you’ll have to go online.” On the other hand there are stores I’ve shopped and the store associate was a pleasure to work with, knowledgeable and extremely helpful. I have watched many customers walk out of a Staples store when they couldn’t find what they were looking for or someone to help them. If Staples invested… Read more »
1
|
0
-   Share

It’s wise of them to realize that their business customers may want to buy a lot of things directly and online without a store visit. But it’s impossible succeed by running away from what people know you to be. So I have very high doubt that this will achieve anything for Staples — it feels like some account planner’s idealized version of reality.

Without stores, Staples is nothing. Without direct and online sales, Staples is a failure. They need to integrate the two. After all, do they think people don’t know they can buy from Staples online? I certainly hope not.

More likely, this is driven by weak agency thinking about how to support a client with a rich environment like Staples.

Who even wants to carry office supplies out of a store? Order them from Staples online and have them delivered to your door.

Coming out of business school I cut my eyeteeth in the office supplies industry — the B2B segment (the “contract” business) of that industry with the old Boise Cascade Office Products division. It was the leading and most professionally-run national office supply wholesaler of the day. Yet that industry was slowly getting disrupted by upstarts like Staples that were going after the small business owners and using their wildly-growing retail volumes to buy at lower price points and passing those savings on to their B2B segment. Fast forward a few decades and the disruptors are being disrupted once more. It’s difficult to turn a visit to your office supplies store into a differentiated and memorable shopping experience. The supplies themselves are commodities and all can be shipped to your home. So what remains for you to compete on is providing value-added, customized services that are tied to the products. I see Staples as being in the early phases of a game plan that resembles what Mr. Joly has successfully done at Best Buy. This is… Read more »
3
|
0
-   Share

The Staples retail store experience really is, in most cases, a thing of a past era. With many of the items carried at retail now a commodity, Staples has to reinvent themselves, migrate to online more heavily and if they can differentiate their in-store experience and augment it with value-added services as opposed to simply offering commodities, they may have a shot. But if not, the retail locations may go the way of many other retail locations recently in the news.

The staples in-store experience hasn’t been a good one for many years. It also hasn’t really evolved with the times and is inconsistent from store to store. It’s clear this has not been a focus for Staples and it’s reflected in the amount of sales they now see from B2B transactions vs stores. It appears they’ve decided to focus their energy on B2B at the expense of stores and are willing to concede those sales to other providers.

This sounds quite similar to apparel retailers deciding to go exclusively to e-commerce sales and close their stores on the assumption customers will follow them. It’s not clear that strategy will prove itself so I’m not terribly optimistic for Staples in this strategy. Time will tell. This may be a reflection of what any retailers are asking themselves — “Do I have too many stores?”

Braintrust
"I suspect B2B has always been their strong suit, and their stores were never really their real center."

"I haven’t been in a Staples in over a year. And when I went it wasn’t to buy supplies, it was to service my computer."

"The decision Staples has to make is what to do with all the outlets they have."