Will same-day delivery keep Macy’s ahead of Amazon? 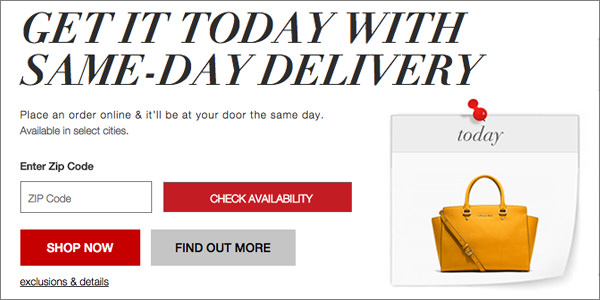 A recent note to investors by Cowen analysts includes a prediction that Amazon.com will become the leading apparel retailer in the U.S. by 2017, topping Macy’s by a comfortable margin. Time will tell if the prediction is accurate, but it’s clear from Macy’s actions, including an expansion of its same-day delivery service, that the department store chain isn’t planning on just handing its crown to Amazon.

"When we piloted same-day delivery in eight markets initially last fall, we learned that our customers appreciate the additional option of having their purchase brought to their home or office in a matter of hours. It is an important part of our value proposition as an omnichannel retailer serving customers who shop our stores and websites whenever, wherever and however they prefer," said R.B. Harrison, Macy’s, Inc. chief omnichannel officer, in a statement. "Our ability to expand same-day delivery is rooted in local merchandise inventories at Macy’s stores, as well as a newly expanded delivery footprint of our partners at Deliv."

The cost for same-day delivery from Macy’s or Bloomie’s is equivalent to standard ground shipping plus a $5 fee on top of it.

The competition for e-commerce dollars is growing more intense and delivery options are often at the center of differentiation efforts. Reuters reported that LaserShip, a delivery contractor for Amazon, expanded e-commerce delivery to five new markets last week.

"Speed is continuing to be the driving force and what everyone wants is fast and free shipping," Josh Dinneen, a senior vice president for LaserShip, told Reuters.

According to the Cowen note (via Bloomberg), Amazon’s share of the U.S. apparel market will grow from five percent this year to 14 percent in 2020.

Do you see it as inevitable that Amazon will top Macy’s and become the leading apparel retailer in the U.S.? How important is the delivery component for Macy’s in its competition with Amazon for clothing customers?

Please practice The RetailWire Golden Rule when submitting your comments.
Braintrust
"Amazon will win on selection. Macy’s and other retailers can be competitive on convenience with customer-friendly delivery and return policies. Most shoppers still prefer browsing in-store when shopping for apparel, by a wide margin. It’s not inevitable, but the competition will definitely raise the bar."

"The good news is that there is enough business to go around and for the short term, Macy’s convenience moves could grab dollars from mid-to-high competitors including Kohl’s, J.C. Penney, Saks, etc."

16 Comments on "Will same-day delivery keep Macy’s ahead of Amazon?"

Yes, it’s easy to see how Amazon can surpass Macy’s in apparel sales — and it’s not about which retailer offers faster or cheaper delivery. It’s really about Macy’s focus on moderate-to-better apparel (with a layer of designer on top) while Amazon has the latitude to be “all things to all people.” And Amazon would probably describe their apparel business as underdeveloped — there are plenty of online shoppers who still don’t think of Amazon as the “top of mind” place to buy apparel.

Having said this, Macy’s does have its own business (and target customer) to protect, and it has already recognized logistics as a key piece of the omnichannel puzzle.

Amazon will win on selection. Macy’s and other retailers can be competitive on convenience with customer-friendly delivery and return policies. Most shoppers still prefer browsing in-store when shopping for apparel, by a wide margin.

It’s not inevitable, but the competition will definitely raise the bar.

Amazon will top Macy’s, but that doesn’t mean that Macy’s can’t thrive. Macy’s has led the way in retail omnichannel and in-store use of mobile devices. They should continue their focus in these areas, building strong relationships with customers. Same-day delivery will add to their arsenal. By staying focused on consumer needs, Macy’s will continue to be profitable regardless of the growth of Amazon.

I do not see this happening for a few reasons, and this includes Kohl’s as well. Armed with many offers from Macy’s and Kohl’s the pricing is way better than Amazon by a wide margin, plus free delivery for purchases over $75, which isn’t hard to do in clothing. Unless you really really need the pants that same day, economically Amazon doesn’t match up in value.
Even my wife who loves Amazon has said so to me many times, and as a shopper she knows deals and can wait a few days to save money, so we’ll see what happens.

This all seems backwards to me.

If my 19-year-old daughter is a harbinger of things to come as it relates to apparel purchases then Amazon will in fact surpass Macy’s. The two primary drivers for this prediction are the ease of determining discounted pricing and free shipping and returns. These factors trump in-store purchases by a wide factor. Retailers need to figure out how to compete with this reality.

Delivery options that enable choice and speed are now primary differentiators for both online and traditional store based retailers.

Delivery of crap is still crap, no matter how fast you get it! Style and fashion are still critical components of apparel retailing.

The issue is not so much whether Amazon will top Macy’s, but the fact that both of them are raising the bar substantially in terms of consumer expectations. This dynamic duo will have a significant impact on other apparel retailers in major U.S. markets.

I’m sure the predictions are right and Amazon will top Macy’s as the leading apparel retailer. However, I don’t think this needs to be an upset for Macy’s. There are plenty of dollars up for grabs and Macy’s has huge cachet and strength that Amazon will never begin to touch. I think putting too much focus on chasing Amazon would be a huge mistake for Macy’s. Same-day delivery is an excellent option to have and Macy’s needs to continue to innovate both in-store and online. But they need to hold themselves apart from Amazon and embrace what makes them different.

Both have their strong points and weaknesses. But when all is said and done, what difference will it make who is first and who is second? Either way the cash register is going to be ringing steadily. And unless I am mistaken, that is the name of this game.

Nothing is “inevitable” in retailing.

That said, Amazon has a good shot at dominating lots of categories, quite probably including apparel.

Now as to Macy’s let’s see where this strategy takes them. They already discount heavily, so margins are under perpetual pressure. To offset the appeal of Amazon Prime, and/or its subsequent evolutions, they are going to charge customers $5 an order to deliver in order to remain price competitive. That will force Macy’s to cut deeper into margins, presumably making them even less attractive to shoppers.

With all due respect, Macy’s is missing the point here. The real “power” of Amazon is the continuing stickiness it manages to create with customers. It keeps inventing more and more ways to connect. Attacking one of these platforms simply isn’t going to prove effective over the long haul.

It’s not whether or not Amazon will become the leading apparel retailer over Macy’s — or any other retailer for that matter. It’s how these retailers will separate them and prove value to their customers. Macy’s and other retailers need to start working on their loyalty — yesterday. There will be no room for mistakes with customers. They must be taken care of through great customer service and quality merchandise at the appropriate price. Look at how smaller retailers compete against big box stores. It’s the same thing.

I just want to go on the record as saying that Amazon is not the retailer here but rather the distributor. Will more consumers shop apparel online? Yes. Will Amazon be their first stop? If they have the right selection.

But will they beat out Macy’s? I honestly don’t think Macy’s will give up much share to Amazon. But will Amazon pull down more sales? Now that is a slightly different question isn’t it? Yes, if they have the right selection they certainly can exceed in sales. Look at how many brands they carry.

Does it have anything to do with same-day service? I think not. That’s just an option that the consumer may want.

Amazon will top Macy’s for a couple of reasons. First, Amazon can sell across the value spectrum, from cheap tee shirts to luxury items, with impunity. Second, Amazon isn’t hobbled by the limitations of physical distribution points (otherwise known as “stores” in the case of Macy’s, and even its physical footprint is limited when compared to various mass and global competitors). The good news is that there is enough business to go around and for the short term, Macy’s convenience moves could grab dollars from mid-to-high competitors including Kohl’s, J.C. Penney, Saks, etc.

I have significant doubts about the apparel claim. Reading the press release closely, it’s “Apparel and Accessories”… NOT Apparel by itself.

That begins to make sense. My guess is that Amazon does well with accessories and does not so well with clothing where fit and finish are critical—meaning there’s a value in the shopping process. Amazon should also do well with basics (e.g. undershirts).

This announcement is concerning for Macy’s management. Are they really chasing Amazon? Are they thinking that the tiny, tiny advantage of same day delivery will make a difference in their business? Even as hype?

I read recently that the vast, vast, vast majority of Amazon purchases are standard delivery (7 to 10 days). Why would Macy’s do this?

Unfortunately, I find too many retailers where the teams making a decision like this get carried away with fads and never stop to look at reality. That may be the case here. So I’m one of the small percentage who voted “This is unimportant” to Macy’s.

It is inevitable, unless bricks retailers embrace online as INTEGRAL to their bricks, not just pasted on as an effort to compete with Amazon. If your bricks are not giving you an advantage in your “Amazon-like” business, Amazon is going to eat your lunch. Very few big retailers today will survive the “creative destruction” that is underway today.

Pathetic paste-on online operations, even massively done, will not get the job done. The interior of the bricks store must be an “Amazon-like” marketplace. See: “Selling Like Amazon… in Bricks & Mortar Stores!“

Yes, Amazon will become the largest apparel retailer, and yes, one day, Amazon will overcome Walmart as the largest retailer, period. The difference though is that Walmart realized that a long time ago and has been fighting back with a great e-com biz of their own and a more recent push to make stores, delivery and BOPIS much better.

Whereas Macy’s focused on the glitz of in-store technology like beacons and flashy screens and lost sight on the key factor in competing with Amazon: convenience. So, IMO, too little too late.

The only thing stopping Amazon now is another Amazon (Jet?).

Braintrust
"Amazon will win on selection. Macy’s and other retailers can be competitive on convenience with customer-friendly delivery and return policies. Most shoppers still prefer browsing in-store when shopping for apparel, by a wide margin. It’s not inevitable, but the competition will definitely raise the bar."

"The good news is that there is enough business to go around and for the short term, Macy’s convenience moves could grab dollars from mid-to-high competitors including Kohl’s, J.C. Penney, Saks, etc."