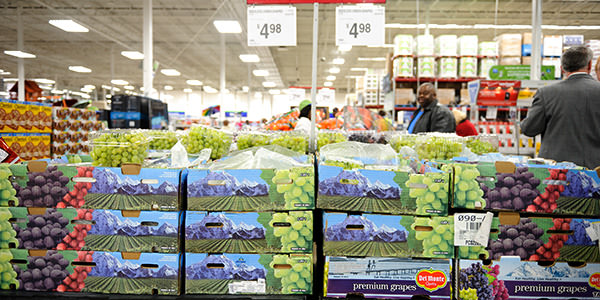 In an email to associates sent last Friday, Sam’s Club president and CEO Rosalind Brewer wrote that after a nine-month review of the business, she was ready to share elements of a new strategic plan intended to build sustainable growth for the chain.

To better serve these groups, Sam’s Club intends to focus intently on the merchandise sold in its clubs. "To do this successfully, we need to harvest data from members and the marketplace," wrote Ms. Brewer.

She announced a number of organizational changes intended to deliver merchandise that will connect with Sam’s members. These included Jason Shaw being named as vice president of category management to "deliver the analytical horsepower needed by our merchandising teams to make informed decisions."

Sam’s, which also is putting greater emphasis on fresh foods, promoted Russell Mounce, senior director of produce and floral, to vice president, divisional merchandise manager of produce. The chain is also looking to hire someone to fill a similar role for meat.

According to Ms. Brewer, key customers are also interested in purchasing locally made food and drinks. To address this need, Sam’s has moved Greg Cathey from vice president of Sam’s Club global leverage to vice president, divisional merchandise manager of regional buying, food and beverage.

Private label will also be a key component of Sam’s merchandise strategy. In her email, Ms. Brewer wrote, "Moving forward, we’ll be developing a broader, integrated private label strategy that will sit above the category level. We intend to build fewer, much stronger private label brands." Sam’s hired Chandra Holt from Walgreens to lead proprietary brands.

In expressing optimism about the outlook for the club channel in general and Sam’s in particular, Ms. Brewer pointed to the chain’s use of digital technology as a key differentiator in the marketplace.

"We’re transforming the shopping experience with digital technology, making it easier for our members to shop in and out of the club," she wrote. "Last year, we created the new SamsClub.com team led by Jamie Iannone, president of SamsClub.com. We’re already the digital leader in the warehouse club channel and believe over time we’ll have the best use of integrated technology in retail.

Do you see substantial opportunities for Sam’s to grow its members (consumer) business? Which of the areas identified by Rosalind Brewer — category management, fresh foods, locally made foods and beverages, private label and digital technology — do you think are most likely to pay off for Sam’s?

Please practice The RetailWire Golden Rule when submitting your comments.
Braintrust
"Sam’s Club has long been a place that many independent c-store operators buy from for their stores. They like the just-in-time buying concept, no minimums,and the freedom to buy from other places versus having to commit to a primary distributor."

"Technology should be the driver and the other initiatives, especially category management, should follow based on the data that the technology uncovers."

"Sam’s will grow at the same rate the category grows — no more, no less. As the category growth matures (if it hasn’t already), so will Sam’s. It is all a matter of demographics. The customer base only has so many people in it."

11 Comments on "Will Sam’s new plan lead to sustainable growth?"

It’s hard for Sam’s to compete against the powerhouse that is Costco, where the two stores go head to head. Costco is already performing well against each of the initiatives outlined in the article. To play catchup is not going to be easy, or necessarily be successful.

Sam’s Club has long been a place that many independent c-store operators buy from for their stores. They like the just-in-time buying concept, no minimums,and the freedom to buy from other places versus having to commit to a primary distributor. Why do I mention them? Because anything that drives the indie c-store operator out of the local Sam’s is likely to hurt volume.

Of the various segments mentioned, my vote would be for the large and neighborhood families because these groups can use the grocery items in the larger sizes offered, buy multiples of the clothing, and are going to be attracted to the low price points offered.

Technology should be the driver and the other initiatives, especially category management, should follow based on the data that the technology uncovers. Costco has high quality fresh meat and produce already so unless there is a game changer in this area Sam’s is just catching up. The Costco model for private label is working well for them and Sam’s has a steep climb to even match it. The local support can be a point of difference but will require knowledge of local markets that may be difficult unless regional management and store management have significant input. Sam’s must be careful not to lose their small business customers in this drive towards other consumers.

Sam’s will grow at the same rate the category grows — no more, no less. As the category growth matures (if it hasn’t already), so will Sam’s. It is all a matter of demographics. The customer base only has so many people in it.

Yes, while club is an SKU-limited environment they need to look at their customer information and decide what size a two, three or four person household really wants/needs to buy. One of the reasons I stopped shopping at clubs is many of the sizes are just too big, even with a four-person household. Perhaps finding the right mix of club-sized items and those that could be smaller but differentiated from Walmart and grocery stores might be an option.

I don’t see any of these really paying off until some other fundamental changes are made in the operation:

To sum it up, Sam’s needs to figure out how to deliver a truly quality product at a competitive price.

Substantial opportunities to grow the consumer side of the business? For a start, it’s good that Brewer starts with a target customer definition: Families, new families and couples. So folks 25 and older. Though not especially specific, or very different from the past. Insights: fresh food, locally-made, private label and digital technology. Who is not saying that? Where is the new news there? Of course, retail is detail. Unless they have something up their sleeve, this is a lot of generic stuff. If the store ends up as a sea of stuff, Sam’s Club is doomed. It will be challenged by its own internal culture to become more “customer-centric” without a more profound expression of its desired customer. How will Sam’s surprise and delight her? What insight does Brewer have that will convert Sam’s to a compelling place to shop? I suggest Brewer listen to Cornell or Joly or Meyrowitz for some pointers on how to rally your associates so they can pivot with agility and not only protect share, but take share in order… Read more »
0
|
0
-   Share

Sam’s Club has three major competitors, grocery stores that have learned to discount and sell in bulk effectively, Costco, and Walmart. Supermarkets, once panicked by warehouse clubs, are now sharing in that market without the membership fee. Costco has altered its style to attract a more affluent customer by adding some premium products and items to which such clientele would respond such as organic products. Costco has opened in areas that access a wealthier customer base. The result has been a 7% comp store increase in its recent fiscal year. Comp store increases at Sam’s have been nowhere near that. Sam’s essentially addresses the same customer as Walmart, and something like a third of Sam’s Club units share a shopping center location with its sister chain.

Sam’s needs to differentiate itself from its parent by doing exactly what its being outlined, but also by adding premium products to tap the affluent market that is becoming much more important in the warehouse club world, and by traveling in its own direction.

So strange, nothing about the SME in the strategy?

As previously stated, privately owned small business convenience stores are an excellent opportunity that was completely overlooked in this executive announcement. The question of interest: is this by design or does Sam’s not have a handle on what and to who is selling on the floor? Ownership, as in Walmart, is having a lot of problems with the grocery business and it is eroding division as well as corporate profits at alarming speed. Their solution: identify areas of opportunity and sell more stuff to the customer and their friends through word of mouth and advertising. Adding to that they have addressed these 21st century down turning economy issues with more 1980s management teams. Simply put they are asking suspected loyal customers to identify themselves and what they want and then investing profit dollars to give it to them with only a sound hope for success. The better plan for Sam’s might be selling what they have to local market segments that not only buy in bulk but also have a longer client lifespan. Small privately… Read more »
0
|
0
-   Share

Have to agree with what others here have said: this is a wish list more than a strategy; and with its bigger brother (Walmart) and its cousin (Costco) likely pursuing the same base, not everyone can come in first…maybe ask Santa again, next year.

Braintrust
"Sam’s Club has long been a place that many independent c-store operators buy from for their stores. They like the just-in-time buying concept, no minimums,and the freedom to buy from other places versus having to commit to a primary distributor."

"Technology should be the driver and the other initiatives, especially category management, should follow based on the data that the technology uncovers."

"Sam’s will grow at the same rate the category grows — no more, no less. As the category growth matures (if it hasn’t already), so will Sam’s. It is all a matter of demographics. The customer base only has so many people in it."