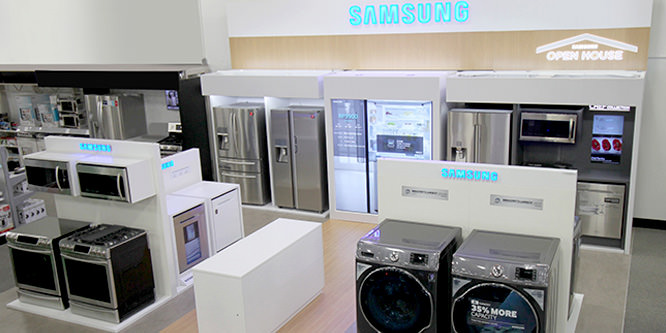 Best Buy has credited store-within-a-store concepts as playing an important role in the chain’s turnaround efforts. Perhaps nowhere is this more evident than in Best Buy’s relationship with Samsung, which operates its Experience shops inside every one of the retailer’s stores across the U.S. It is precisely the strength of the relationship between the two that has raised questions whether Samsung’s recent recall/discontinuation of its entire Galaxy Note 7 smartphone line and another recall of 2.8 million washing machines will hurt Best Buy’s business heading into the holidays.

There’s no doubt the recalls have hurt Samsung’s brand reputation and negatively affected its business results. A recent post by Samsung, reported by TechCrunch, included a message of apology to its customers for the Galaxy Note 7, which was recalled and then taken off the market due to incidents of lithium-ion batteries within the devices catching fire. No mention was made of the washer recall and reports of the tops of machines “exploding” off leading to 14 injury incidents to date.

“Samsung has a long heritage of innovation and we have shown that we can and will learn from our mistakes,” the note read. “While we are always looking to innovate and create the next generation of great consumer technology, safety will remain our top priority. We will invest to better serve your needs through enhanced customer care and assurance.”

Best Buy began adding Samsung Experience shops within its stores back in 2013. The shops, which typically take up about 460-square-feet inside Best Buy stores, focus primarily on mobile devices.

While Best Buy does not break out the contribution of Samsung Experience shops, CEO Joly has credited the store-within-a-store strategy as one of the pillars on the company’s turnaround plan.

“Not only do we showcase the best of what our vendors offer, we’re also benefiting from the material investments that several of the world’s leading technology companies are making in our stores,” Mr. Joly told analysts last year. “With these partnerships, we’re able to bring to life interactive technology experiences that again make the Best Buy operating model more relevant for customers.”

DISCUSSION QUESTIONS: Will Samsung’s problems have a material impact on Best Buy’s business during the holiday selling season? Do you expect Best Buy to play a significant role in helping Samsung as it seeks to regain lost brand equity in the U.S. market?

Please practice The RetailWire Golden Rule when submitting your comments.
Braintrust
"Best Buy’s holiday results will have more to do with how they execute through the critical holiday season than any fallout from the Samsung debacle."

Samsung’s problems will not be helpful for Best Buy, but I don’t believe it will have a material impact on overall results. While Samsung is a featured brand, it is only one of many that Best Buy offers. I believe Best Buy’s holiday results will have much more to do with how they execute through the critical holiday season than any fallout from the Samsung debacle.

Consumers still want electronics, but many will think twice about buying Samsung products. Best Buy knows this and will push other products besides Samsung in its advertising and stores. I don’t think the Samsung problems will negatively effect Best Buy’s holiday numbers. Best Buy can help Samsung regain brand equity, but only after Samsung has regained the trust of American consumers, which is going to take time, effort and a lot of money.

I think this is the least of Best Buy’s problems. It has no viable strategy of dealing with its arch rival, Amazon.

InternetRetailer recently published data concerning mobile traffic gains and losses into webshops. In their study, Amazon had one of the fastest recorded annual traffic growths, at 9.5 percent. Best Buy was among the worst performers among the top 100 U.S. e-commerce companies, with a recorded decline of 9.7 percent in mobile visits during the same period (November 2015 to November 2016). Given recent trends towards mobile shopping, this is practically a death sentence.

Unlike many of my colleagues on this forum, I do not see a great future for this retailer, be it with or without Samsung as a strong partner. They must change their business model before it is too late.

First off, Best Buy may want to re-consider putting all their store-within-a-store eggs in one basket. Secondly, this might be a great time to make some good out of it. Have the Samsung people there to assist with fixing or exchanging phones. Serve some coffee and doughnuts, have giveaways — do some great PR. This is a great opportunity and one that neither company should miss out on.

I think this is a great opportunity for Best Buy to make a positive impact on consumers with how they deal with this. Consumers know it’s a Samsung product and are well aware of the publicity around the product therefore are unlikely to blame Best Buy. If Best Buy have a clear strategy on how they deal with this and make sure that every employee is appropriately trained, their brand could shine through. It’s never what happens, it’s how you handle it that matters, and this is what makes a brand experience.

The art and science of disaster recovery (remember Tylenol and a myriad of auto problems?) suggests that Samsung too will recover from bad publicity. There is significant brand equity to draw from and retailers (Best Buy, cell providers) are motivated to restore consumer confidence. The evil in this engineering breakdown will be restored quickly because all stakeholders are highly motivated.

Best Buy’s broad selection of the most sought-after products across brand names should serve to insulate it from Samsung’s current woes. The store-within-a-store format is well-suited to offer Best Buy’s customers convenient alternatives to Samsung, ideally meeting customer needs and delivering a positive customer experience.

The Samsung problem won’t be material on Best Buy’s holiday season. Customers will still purchase but have to pick a different brand.

Best Buy will help as it regains brand loyalty because they are a key distribution point for Samsung and have a good store in store presence. I expect them to come back with heavy discounting to drive customers back to the brand.

Samsung’s problems with reflect on Best Buy, but that’s not the core problem. The core problem is the value prop for Best Buy against the competition like Amazon.com for the the electronic buyer’s wallet in the upcoming holiday season. Are there “must have” items that Best Buy can offer to drive traffic to the brand (store and online) or is it going to be me too? Would be curious to see the merchandising strategy now that Thanksgiving and the election is over and people settle in for the holidays.

Braintrust
"Best Buy’s holiday results will have more to do with how they execute through the critical holiday season than any fallout from the Samsung debacle."