Will Starbucks prosper or suffer under a hedge fund’s influence? 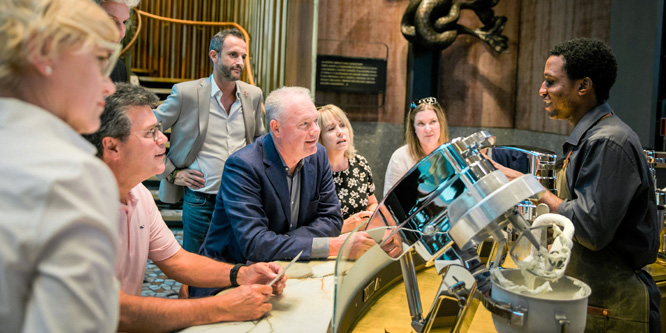 Starbucks’ management and board of directors may need to stock up on headache remedies. Bill Ackman and his hedge fund, Pershing Square Capital, has accumulated 15.2 million shares (about 1.1 percent of the total) in the coffee giant with plans to double that stake over the next three years.

For those not familiar, it was Mr. Ackman who was behind the decision to push aside Mike Ullman as CEO of J.C. Penney and replace him with Ron Johnson from Apple. Mr. Ackman, it was reported at the time, was actively involved in recruiting Mr. Johnson. More than five years after the board fired Mr. Johnson, many continue to blame him for many of the problems faced by the chain today.

Mr. Ackman has been in the middle of scrums with the board of directors at Penney, ADP, Herbalife, Procter & Gamble and other companies over the years. So, the question today is whether the same is likely to happen at Starbucks?

Pershing Square Capital and Mr. Ackman have had a tough go of it in recent years. CNBC reports that the hedge fund has seen investors leave due to poor returns. The fund has lost more than half its assets since reaching a high of $20 billion in 2015.

Starbucks, for its part, has been seeking ways to reinvigorate sales in the U.S. In July, Starbucks reported domestic same-store sales growth of one percent for its fiscal third quarter while lowering its outlook for the year. The chain has scaled back plans to open new locations while announcing it expected to shutter around 150 shops, well above the 50 or so it closes in a typical year.

Mr. Ackman doesn’t appear as though he plans on causing a ruckus at Starbucks. He has said he supports moves being taken by management to address some of the challenges it faces and that he believes Starbucks’ share price could double over the next three years.

On the positive side for Starbucks and Mr. Ackman, shares in the coffee giant jumped five percent on the news of Pershing Square’s investment plans.

DISCUSSION QUESTIONS: Should management and the board of directors at Starbucks be concerned about Bill Ackman’s plans to acquire shares in the company? Have activist investors been a net positive or negative for the long-term prospects of the companies in which they invest?

Please practice The RetailWire Golden Rule when submitting your comments.
Braintrust
"Do activists typically invest to maintain the status quo? Not as a rule, which is why Starbucks' management needs to be afraid, very afraid."

9 Comments on "Will Starbucks prosper or suffer under a hedge fund’s influence?"

The old phrase ”money talks” applies here. Nothing at Starbucks will change now and probably will not going forward as long as the company produces and makes their shareholders money. However, if they do not make enough profit or fail to make any profit at all, then watch to see what happens with their investors most likely led by Bill Ackman. These people can’t help themselves. They don’t make their money by working, they make it from investing and that’s an entirely different mindset. They demand a quick return on their investments, and they expect to see substantial gains. So only time will tell.

It’s very difficult to envision the value Mr. Ackman and his fund bring to this equation. If it’s a simple bet on growth that’s one thing. If it’s to take on an activist role, I would not predict good things. I might be one of the few who think Ron Johnson had a good vision for J.C. Penney … a good page 1 of concept and overview if you will. But the scope and depth and breadth and speed of the implementation was beyond crazy. If that provided powerful lessons, great. I would never suggest that Starbucks needs the level of re-invention that faced J.C. Penney.

It’s full steam ahead for the coffee giant in an ever-evolving, changing and competitive landscape. Starbucks has already laid out their transformation plans, which include consolidating their non-profitable locations, changing the format of their stores, diversifying their product offerings and driving more of what they originally promised; an experiential coffee house setting.

As long as the transformation plans keep the revenues, profitability and value flowing in, we shouldn’t expect any consequential impacts from Bill Ackman and Pershing Capital. However, historically the firm doesn’t have that much patience.

The days of having a Starbucks at every corner doesn’t equal instant success. Healthier choices are out there and if the company doesn’t respond, the market will dictate how things go.

I would be very unhappy with an “activist investor” on board. Especially this one. Can you spell JCP?

Personally, I can’t think of ONE that has been useful. Carl Icahn makes me ill, and most of the others that have come and gone have raped and pillaged the companies they invested in for their own gain only. Creepy stuff.

If investors understand the market and are in it for the long-haul then their thinking and influence can be good. However, where they come in to make a quick profit without any consideration of long-term sustainability they are a destructive force.

While I am sure the intention was good, J.C. Penney is a case in point. The direct actions of a powerful investor caused massive damage to the firm from which it is still suffering today.

Given the track record of both the fund and its founder, the answer would seem to be yes. Activist investors are — at best — a wild card that occasionally infuse new thinking into moribund organizations. But Starbucks is far from moribund. The fact is that their real estate strategy advanced faster than their day-part marketing thinking, i.e., they ended up with more stores than they need at certain times of the day, but they are still in good shape for the mornings and afternoons. Can Ackman — or anyone — change the fact that people need more caffeine earlier in the day than they do at night? Is trying to make Starbucks a place where hipsters gather through the twilight hours over a “nice Merlot” and a bowl of quinoa and açaí ever going to happen? The likely answer to both questions is no. The chain may be close to the upper end of its organic growth cycle which means any growth past the current level may be cancerous. Do activists typically invest to… Read more »
4
|
0
-   Share

Starbucks has gone from a loyalty leader to a laggard and consequently their stock price has underperformed in an ever-rising market. Management should be concerned as Ackman is right that Starbucks has underdelivered for its shareholders of late.

In our work one of the things we do is track “loyalty leaders” and compare their stock price performance with both competitors and the S&P 500 as a proxy for the U.S. stock market. We used to include Starbucks as a loyalty leader but in reality they have done very little of note since MOPIS. Yes they relaunched Rewards but it is nothing more than a hyper-transactional loyalty program and does very little to impact the customer experience other than MOPIS, which launched before the new Rewards program.

Yes, the board should be afraid. Mr. Ackman is not a passive investor. He might be as long at the bright forecast he made when announcing the investment comes true, but if it doesn’t he will quickly turn active. Based on his past experience, this has not always worked out for the companies he has invested in.

Corporate investment is the heartbeat of success for American companies. How corporate boards manage their investors’ involvement determines corporate systems and processes throughout their company, not the presence of one minor investor.

Braintrust
"Do activists typically invest to maintain the status quo? Not as a rule, which is why Starbucks' management needs to be afraid, very afraid."