What will Starbucks do without Howard Schultz? 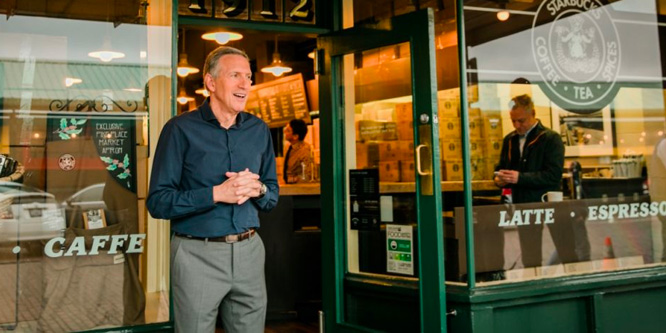 When Howard Schultz stepped down from his position as CEO of Starbucks in April 2017, many wondered how well the coffee giant would fare without its longtime leader in the role. While Starbucks has faced some business and public relations challenges in the year-plus since Kevin Johnson took over as CEO, the company has managed to avoid a sky-is-falling scenario. Now, as it turns out, Mr. Schultz believes Starbucks is in good hands and is stepping down as executive chairman and member of the company’s board effective June 26.

Mr. Schultz, who will honored as the company’s chairman emeritus upon his retirement, first joined Starbucks as its director of operations and marketing in 1982. During his four decades-long stint as the company’s CEO and chairman, Mr. Schultz grew the company from 11 locations to more than 28,000 in 77 countries.

As Starbucks’ leader, Mr. Schultz emphasized the role of the company in doing right for its employees and the communities the chain served. Starbucks offered healthcare benefits, stock ownership and free college tuition to its workers.

While much of the press coverage around Mr. Schultz’s announcement has speculated on a potential role for him in politics, potentially as a candidate for President in the next Democratic Party primary, the business story remains on Starbucks and its prospects going forward without the person most associated with its image.

“It’s our duty as leaders to constantly reimagine Starbucks,” said Mr. Schultz. “I am honored to call Kevin my friend and partner. And Starbucks is fortunate to have him. This leadership team is extraordinarily capable. They, too, believe that Starbucks has a responsibility to use our scale for good.”

Mr. Schultz’s place as chairman of Starbucks’ board will be filled by Myron “Mike” Ullman, former CEO of J.C. Penney.  Mellody Hobson, president of Ariel Investments, will become vice chair.

DISCUSSION QUESTIONS: What will the future hold for Starbucks without Howard Schultz? What challenges will the management team face?

Please practice The RetailWire Golden Rule when submitting your comments.
Braintrust
"We already know that Howard Schultz has left Starbucks in great hands. And he won’t be far if needed."

"A tried and true leader, an innovator and retail radical, hats of to his countless contributions to the industry and the environment."

"Hats off to Howard Schultz, good and faithful soldier in defining a clear vision of the possible and marshalling efforts to make it so."

16 Comments on "What will Starbucks do without Howard Schultz?"

Howard was a remarkable visionary nearly losing the company when he remade it into his own image. His dedication to not only the drinks but social progress have been the same from the start, he was their “True North.” That said, the company has been keen to grow from within with passionate people dedicated to their mission and values. This isn’t so much bad news for Starbucks as it is great news for Howard who is bound to take what he’s learned and the values he has instilled to new projects that further his goal of greater inclusion and understanding around the world.

My recollection is that Mr. Schultz stepped back once before. Along came the operations geniuses and the coffee and experience went downhill. The coffee machines were too tall and you couldn’t see the baristas, the quality was inconsistent and sales were not all that.

I am pretty sure that’s correct and it’s why he got involved in the business again. So the management team will have to resist the urge to make “improvements” just for the sake of cost reductions.

Starbucks will be fine without Schultz and besides, I’m sure he’ll always be available for consultation regardless, lurking in the shadows (I’m joking about the last part). Starbucks is like a well-oiled machine, even with the threat of millions of very fine new local shops, you still can’t beat their speed of service/quality combo. Love you pour-over, guys, but sometimes waiting 15 minutes for a coffee just doesn’t cut it on the way to work.

And lastly, I’m just going to come out with it; I’d vote for Schultz. His concern for all people and his hard scrabble background combined with the drive that built an honest global business is something we could really use right now. If only.

Schultz had a remarkable run, and like many companies that lose a “giant” CEO, will have to find its way without him. There will be failures and there will be successes. The new leadership will constantly face the question of “what would Howard do?” and will be second guessed. The key to Starbucks’ continued success will be innovation, customer service and product assortment.

The best thing that any entrepreneurial leader can do for a company with which s/he has been so closely identified is to assure a strong succession plan. This didn’t work the first time for Mr. Schultz, but he seems to feel confident with the leadership team that he has put into place. While it’s hard for CEOs with presumably strong egos to walk away, it’s an essential part of the job.

Beyond the debates about “best practices” in any consumer-facing company (Do we serve breakfast? How do we incorporate the Teavana brand?), the key is to ensure that the company’s underlying culture and values are in good hands. Let’s hope that Mr. Schultz has succeeded here, no matter what the future holds for him.

Howard Schultz was phenomenally successful in building up the Starbucks business into the global powerhouse it is today. However, the business is now at a different stage and as a more mature entity, the future opportunities are less about expansion and more about careful operational management to generate incremental growth and drive efficiencies. Schultz has the capability to do this, but it is probably not what excites him: he’s a business builder and an innovator. By comparison, Kevin Johnson is a good operational head who knows the business and has the full trust of Schultz.

Hats off to Howard Schultz, good and faithful soldier in defining a clear vision of the possible and marshalling efforts to make it so. I do subscribe to the idea that all great leaders are in the past, but that people of good character and wisdom will stand on their shoulders. The foundation Schultz provided offers many, many options.

We already know that Howard Schultz has left Starbucks in great hands. And he won’t be far if needed.

I am certain that Starbucks will continue to look for new ways to delight and surprise customers. Personally, I am looking forward to seeing what Mr. Schultz does next!

This isn’t the first time a successful founder has stepped away from the business. Mr. Schultz will be missed, but he and his board are very smart people. He surrounded himself with the best, and I’m confident they will manage this next chapter in the Starbucks story.

After 40 years at the helm, it’s impossible to ignore the departure of Howard Schultz. The immediate impact will be internal – Mr. Schultz has provided the continuity and tenacity of a founder’s vision combined with that inherent credibility. Sure, there has been a transition in place, but that cannot eliminate natural short term – and fully surmountable – concerns. The current leadership team needs to over-communicate on staying the course regarding the company’s cherished values.

On the external front, the path forward for Starbucks is well in place across the globe. The business challenge is having a relatively mature business in the U.S. (store growth) versus the booming growth trajectory in China. Is the company’s story a growth story or a value story and is a two-pronged strategy the current reality and, if so, is it desirable and manageable? How can Starbucks reignite growth in its home market and maintain a single “growth” narrative?

Unlike the first time Schultz left, this time Starbucks will do well. He is not making the same mistake twice.

The brilliant business strategies and powerful vision Howard brought to Starbucks will not be shaken. That type of leadership creates a culture that literally enforces itself. Starbucks will continue to thrive. Howard will carry those principles and practices to any place he desires and a new venture will be born. Watch for it!

Schultz has done an excellent job setting a clear vision for the company in terms of product, experience and employee culture. He has a predecessor that can lead the next wave of growth for Starbucks with excellent precision. From helping the coffee growers to sustain their business to providing employees benefits that demonstrate a commitment to their own well being, Schultz has made a remarkable impact on the most important business asset: people. A tried and true leader, an innovator and retail radical, hats of to his countless contributions to the industry and the environment. Looking forward to what’s next for Schultz!

The management challenges going forward will be international trade, growth beyond market penetration and captivating the Gen Z consumer.

The last time Howard stepped down he came back because the company was floundering. I am assuming he spent more time getting a succession team in place this time. This past year he stepped away from day-to-day responsibility and the company has managed a major PR problem. Howard did get involved but more as the public face. It is hard to imagine that he will not be involved as Emeritus Chairman. However, he has had a chance to get a good team in place.

Howard Schultz is a visionary regarding how to run a financially successful business that has stayed true to its core values. As he owns about 3 percent of the company’s stock, he has a major financial interest in its success — he clearly has confidence in his leadership team to take the reins and run. I hope the management team will continue to do right by the employees and customers, rather than making changes for the sake of making changes.

I think they’ll do just fine (and if they don’t, it will be a negative reflection on Mr. Schultz that he didn’t prepare [better] for his departure, as it is an important, if overlooked, part of a CEO’s job).
I expect that management will concentrate more on selling coffee, and less on distractions — i.e. don’t expect SB to be the source for anymore potential POTUS candidates — and I’m fine with that … more than fine, in fact.

Braintrust
"We already know that Howard Schultz has left Starbucks in great hands. And he won’t be far if needed."

"A tried and true leader, an innovator and retail radical, hats of to his countless contributions to the industry and the environment."

"Hats off to Howard Schultz, good and faithful soldier in defining a clear vision of the possible and marshalling efforts to make it so."