Will Target’s wage hikes be a differentiator? 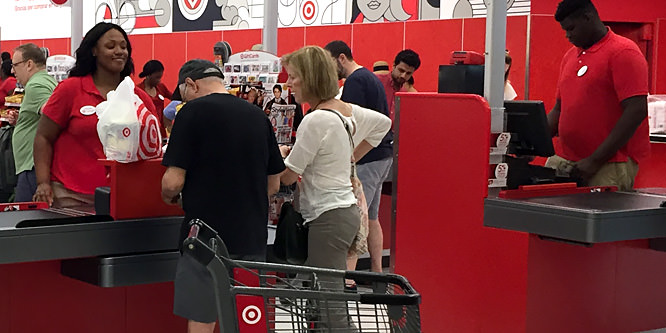 Target Corp. announced on Monday plans to raise its minimum hourly wage to $11 in October and to $15 by the end of 2020.

Target said the higher wages will allow the retailer to better recruit and retain employees with the aim of supporting “an elevated experience” for its shoppers. The $11 rate next month also applies to the more than 100,000 seasonal temps it expects to hire. Entry-level hourly wages were raised to $10 last year from $9 previously.

“Target has always offered market competitive wages to our team members,” said Brian Cornell, CEO and chairman, in a statement. “With this latest commitment, we’ll be providing even more meaningful pay, as well as the tools, training and support our team needs to build their skills, develop professionally and offer the service and expertise that set Target apart.”

The move to $11 puts Target well above the $7.25 per hour federal minimum wage and past Walmart’s base rate of $10.

According to Glassdoor, starting wages for cashiers are $9.17 at Walmart and $12.56 at Costco. Amazon fulfillment center workers start at $12.42.

The move comes amid heightened competition for workers in a strengthening labor market and recent wages hikes by competitors. Walmart made waves for raising its entry-level hourly pay for its associates to $9 in 2015 and then to $10 in 2016. Management has said such moves have improved its scores on customer service surveys.

Target has been investing in hip private label brands and reducing prices to be more competitive with Walmart and Amazon. Staying a step ahead of competitors with wage hikes may gain some goodwill with consumers ahead of the holiday selling season. Reducing turnover may also support better in-store service and reduce the costs of employee training.

Target said the wage increases would not hurt its previously announced full-year and quarterly earnings forecasts.

DISCUSSION QUESTIONS: To what extent will increased starting wages improve Target’s ability to recruit and retain good workers? Do you see the higher wage battle continuing among top chains?

Please practice The RetailWire Golden Rule when submitting your comments.
Braintrust
"I would expect to see wages continuing to increase over time as pay becomes a key factor in where the best workers choose to ply their time and talent"

"Strong economies produce tight labor markets and retailers that recognize the value of human assets in such markets are smart to be first movers..."

"There’s a broad consensus that empowered store associates will be key to the store experience."

20 Comments on "Will Target’s wage hikes be a differentiator?"

I applaud Target’s move to value their employees by increasing wages. Not only will this enable Target to recruit and retain quality employees, but I believe, happy, valued employees help create a better store/customer experience which will translate into better business results. Top chains realize that front-line employees are critical to success and so I would expect to see wages continuing to increase over time as pay becomes a key factor in where the best workers choose to ply their time and talent.

Increasing starting wages will help Target recruit and retain workers. This move comes after the job market has tightened and other companies who employ lower wage employees have increased their base pay. Target had to follow or risk being marginalized. Nonetheless, I’m glad to see this step by Target management.

Better wages are nice. Making $2,000 a year more is unlikely to make you a better employee, IMHO. And I don’t recall customer service being the big issue at Target.

As an advocate of free markets and competition, it is encouraging to see Target take this step in the context of the P&L impact this move will undoubtedly have. Strong economies produce tight labor markets and those retailers that recognize the value of human assets in such markets are smart to be first movers in wage increases. Done correctly, this move can provide Target a much needed point of difference with more knowledgeable and motivated associates on the floor to provide better customer service and more efficient operations.

Study after study tell us that nothing impacts the quality of a store experience like available, educated and empowered sales associates. Target’s commitment to placing greater value on their employees will lead to higher retention rates, happier associates and — without question — better experiences. Well done, Target.

The increase in the minimum wage will help Target, but likely only in the short run. If it proves a successful strategy for attracting workers it will be matched by the competition, nullifying the temporary advantage unless Target keeps its wage well over the industry standard. And it has to be significantly higher in cases where minimum wage workers might have to, say, drive an additional five miles to and from work. There’s also the issue of the federal minimum wage. It’s quite likely that by 2020 — assuming the Democrats ever get back in power — it will be raised anyway, again nullifying Target’s advantage. But for the short run it is a differentiator and, yes, I expect everyone else to follow suit — if they have stores in close competition with Target.

I think it will vary greatly depending on location. In places like Pennsylvania where the minimum wage is $7.25/hour, Target’s $11 hourly wage will be extremely competitive and allow them to hire great workers. In places like Massachusetts where $11 is minimum wage, Target would have to pay a lot more to be as competitive.

The increased wage should allow Target to attract and retain employees in the short run. If increased training is also a part of the plan so that the employees offer great in-store service that would be a winning combination.

The most interesting statistic in this discussion is the starting hourly rate at an Amazon fulfillment center — $12.42. That is $1.42 higher than the $11/hour being boasted by Target. I don’t believe an hourly wage of $11 will profoundly change the caliber of workers. It offers a reason for Target to claim they are competitive and it may help Target be more selective in their choices but it won’t materially affect the retention of good workers. I met many volunteers that are better workers than paid employees. It always comes down to the individual person — their character, pride and integrity.

I like the headline question better, “Will Target’s wage hikes be a differentiator?”

Of course not. Shoppers don’t know or care how much employees at a store are paid. They only care about their own shopping experience. And I doubt you can find any shopper who will include “the employees are really well paid” in an unprompted post-shop interview.

The argument for better motivated and engaged employees is appealing — but we forget our management psychology classes at our own peril. Money is not a long-term motivator — but not having it can be a powerful demotivator. So is Target’s $11 enough of an improvement on the human condition to meaningfully change how its employees treat shoppers? Guess we’ll see.

There’s a broad consensus that empowered store associates will be key to the store experience. Target is effectively announcing that it intends to step up and make this happen. This is the kind of leadership that its neighbor, Best Buy, is leveraging to boost profits and move the industry ahead.

Wage hikes by themselves aren’t differentiators — at least with consumers. Consumers are still motivated by product, stores, displays, price/value and customer service.

That said, store associates are critical to consumers. So indirectly this may be an excellent move for Target — to help hire and keep those associates that make a real difference for shoppers.

(That said, I’d feel even better about Target being serious about keeping good associates if they announced they were also cancelling store ratings by passive online surveys. These are incredibly de-motivating for associates — forcing them to be ranked based on shopper response to corporate choices like return policies or the goods that are stocked.)

This is a nice bonus for the people doing the same work now at lower pay, but it will only mildly elevate shopper experience if at all. These are not the kinds of wages to attract people to careers or attract college-educated career-minded people. So ultimately, employees might put a little more effort into their jobs, but for those motivated by more money, there are better alternatives. In fact, locally, Whole Foods is only about 1,000 feet away from Target and their starting rate is $12.00 or $12.50 AND still, they have high turnover.

Higher wages to good employees is a valuable incentive for those retailers whose margins and expected profit can allow it. The application of a blanket wage policy is a mistake for any retailer. Why not give more flexibility to the store manager to be able to offer a higher wage to qualified, skilled employees and a lower wage for those truly entry-level employees? Get the best employees then pay them even more to keep them as good retail employees totally change the in-store shopping experience. That said, the available labor pool is going to continue to shrink as national employment levels increase so retail wages will have to be more competitive.

The wages across the retail and hospitality sector show that it is not the skills or education that one has but the scarcity of people willing to do the job that will determine the wage rate. That said, with increase in wages Target and all other retailers are going to need to increase the productivity of those workers or take a major hit to their bottom line.

Smart timing. Surrounding retailers are in the process of hiring, and some are in the midst of training badly needed holiday workers. This move could decimate those efforts.

This is a great decision on Target’s part, especially just in time for the holidays. With competitors offering higher wages, this was a necessity for Target. Attracting and holding onto the best talent is one of the key ways for Target to make a dent in the market. I’m glad that this isn’t a one time raise, instead Target set a goal leading up to 2020. Competitors that pay a bit more than Target will continue to sweeten the deal to entice new employees. That means Target has its work cut out for the next few years to make sure that they become and remain an employer that applicants flock to.

Great move. Right now it’s all about perception, regardless if the increase was $15 or $13 it’s a move in the right direction. And for young adults looking for a job, pay is always a top priority. If a brand can build up excitement and prestige for working for them then the talent will follow. Just think Chick-fil-A or In-N-Out Burger … I am always amazed at the quality of service I receive when visiting.

It’s absolutely a step in the right direction. That this move follows Walmart doing the same thing shows that this may be a competitive move, but one that benefits workers in the end and paves the way for other retailers to follow with raising wages.

It’s always going to be easier to retain employees when the pay is increased and this move is set to help thousands of people around America. Even a dollar more an hour makes a difference. Their commitment to raise the starting wage to $15 by 2020 will improve employee retention, while at the same time encouraging other businesses to follow.

"Strong economies produce tight labor markets and retailers that recognize the value of human assets in such markets are smart to be first movers..."

"There’s a broad consensus that empowered store associates will be key to the store experience."