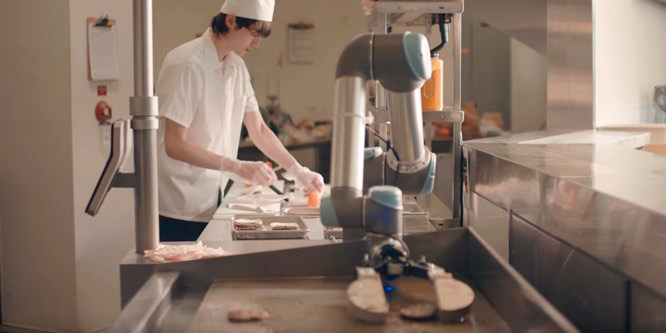 With the integration of touch screen ordering kiosks into big chains like McDonald’s, there has been a lot of speculation about how technology will ultimately reshape fast food — both for the customer and the employee. Two new technological innovations have hit the scene, either of which could mean substantial changes for foodservice if they catch on.

Tech company Miso Robotics recently launched an AI-based robot capable of cooking and flipping a hamburger, according to the Pasadena Star News. The robot, called Flippy, is being tested at a CaliBurger location in Pasadena, CA. It uses heat sensors to determine how well the burger is cooked, flips it and, when it is done, moves it out of the way for a final once-over by a human chef. Miso Robotics intends to use the AI for other — some potentially dangerous —commercial kitchen tasks as well, such as frying chicken and plating vegetables.

Flippy hasn’t done away with the human element at CaliBurger, but the broad threat AI poses to low-level food prep jobs has not gone unnoticed. The White House late last year released a study indicating that the AI revolution could have a devastating impact on employment numbers.

Another startup, BeeHex, has launched a 3-D printer called Chef 3D capable of making pizzas, according to Food Dive. The story speculates that such a device could add an experiential element to food shopping.

Such technology could also fix a problem that grocers, convenience stores and restaurants have faced in attempting to meet a growing demand for freshly-prepared products — an increase in foodborne illness. That is, assuming that 3-D printed food is palatable, passes for “fresh” in the consumer’s mind and does not come with its own unforeseen problems when producing at scale.

DISCUSSION QUESTIONS: Will innovations like Flippy and Chef 3D meet the needs of QSRs, grocery stores and department store food courts and lead to fully-automated food prep? How likely are technologies such as these to come into widespread use over the next decade? What hurdles do you see?

Please practice The RetailWire Golden Rule when submitting your comments.
Braintrust
"This will not replace humans, but will certainly create efficiencies in the process and hopefully the overall customer experience."

"The potential downside is its socioeconomic impact, namely, the loss of jobs for lower-wage workers."

"If the financials make sense, especially in the face of $15 an hour humans, the burger flipper could be very big."

Automation changes the world of repetitive and unsafe tasks in which a degree of precision is needed. Machines assemble our cars and act as a heart or a vacuum cleaner. Flipping burgers and making pizza don’t seem like a long reach for automation.

It can. If you can place the order digitally, you can connect the front end with the back-of-house for food preparation and automate most of the process. This works in QSRs with formulaic processes and consistent food items. This will not replace humans, but will certainly create efficiencies in the process and hopefully the overall customer experience (no lines or waiting). The fully-automated ovens and fryers capable of this process are just around the corner.

I agree — technically a no-brainer. If the financials make sense, especially in the face of $15 an hour humans, the burger flipper could be very big. Not so sure about 3-D printed food.

As restaurants and retailer management strive to drive costs out of their systems, they will continually turn away from employees and towards automated solutions. If robots can perform as well as humans, jobs will fall. At first this will be a novelty, then it will pose a serious threat to jobs. It’s a topic that is not going to go away.

They certainly have the ability as long as the price is in line and the processes being addressed are basic. Watching my husband, the amateur chef, prepare food goes to show how much technique factors into a good dish. That, IMHO, can’t be replaced by a machine. Not just yet anyway.

For very repetitive food prep tasks, yes, there is a future for robotic kitchen assistants such as Flippy. Throughout our modern history the advancement of technology (and robotics) has caused changes to employment patterns. This usually means one type of job is eliminated from the workforce when it is replaced by a machine, but then a new type of job emerges in its place. We see today that there is often an uproar in the population when this happens as people don’t like to see any jobs taken away, especially when the new replacement jobs require different skill sets. We can go as far back in history as we want to see this effect repeat over and over throughout civilization.

Will products like Flippy change QSRs? Yes, almost certainly, but not necessarily how we think. The skill sets required for restaurant kitchen staff may change but humans will still be required to monitor for food safety and overall quality of the finished dish.

I can foresee customers being willing to have their burgers flipped by a robot but don’t foresee consumers embracing printed food. The first is a back of the house function that few people concern themselves with in a QSR. Printed food would have to be disclosed.

The impact on labor may be good for the companies that deploy the automation, but not necessarily for the workforce. Many, if not most, of these positions don’t require a high skill level. As the use of automation grows this type of employment will be harder to find.

Robotics and automation are ideally suited for food service tasks such as making and cooking burgers on a grill. The biggest challenge with robotics will be sanitation and cleaning. Anyone who’s seen an episode of Kitchen Impossible has seen the filth that can be hiding in plain sight in restaurant kitchens. The robotics are another extension of the ever-expanding world of connected devices and, as such, sensors will need to monitor the food safety associated with the use of these technologies (which will be commonplace).

For me, with an all-scratch deli/catering service, I am looking for procuring top-notch produce preparation services that saves me time and money. I am trying to add fresh pepper strips and already just found some nice quality celery pieces that are top-quality. The broccoli crowns, shredded cabbage and carrots are a part of what we use, which helps a lot. We still do onions and redskin potatoes as this is impossible to find, as they wilt pretty fast so we will continue to do our own. All restaurants have different needs, but for me, we use our associates to make the homemade foods, and that will continue as it is a huge advantage for us to do so. Also robots can’t sell or engage in the art of sampling and getting the extra sale, so the human factor will always win out in that regard.

You have to imagine that the grocery and food services will be fully automated by 2030. The smart fridge will known what it needs order via AmazonFresh, where a robot delivers the food, where another robot takes it to the robot cook — you get the idea! Mobile ordering at McDonald’s is a case in point. We believe this will become a big deal. Consumers want convenience and are fairly willing to forgo the human element in a lot of verticals. Does it really kill me if I’m served by a robot instead of a human? Not really, so long as it gets my order right. We have to be realistic about what young people moderated by technology today will prefer in the future. Unfortunately for the food services, disruption is coming. The robot that makes your pizza from start to finish is just one small example of what this might look like. When the Whitehouse warned of jobs under $20 dollars an hour being more at risk in the future of work, they were… Read more »
1
|
0
-   Share

As noted by others, this technology has speed, accuracy and cost-saving advantages. The potential downside is its socioeconomic impact, namely, the loss of jobs for lower-wage workers.

While the latest buzz is around Universal Basic Income (UBI), the concept has its critics. This program, initiated as a test in Finland, offering universal income promises workers greater security, especially as technological advances reduce the need for human labor. It will also allow unemployed people to pick up odd jobs without losing their benefits.

Certainly, discussions of this concept will move to the forefront as such technological advances become reality.

Missing from all this is any mention of cost: if “Flippy” costs $200K, or if it costs $10-20K annually for servicing, software upgrades, and what not, then the savings may be illusory. Other than that, I don’t know … but the famous Feeding Machine scene from (Chaplin’s) “Modern Times” comes to mind.

The pressure for employers to provide a living wage to their employees will continue to increase exponentially in the present and future. The labor force is realizing that time is money and working 45 to 50 or even 60+ hours a week just to get by is not sustainable over time. In order to pay more, employers need to get more production. Automating a reduced labor force for greater monetary potential is the only solution.

This century will see an enormous increase in automation for all lines of business. The roles of mankind in the economy will see drastic changes. Transportation and small and medium service industries will surpass entrepreneurial and investor income potentials as world demand for goods and services increase. It could come sooner if we could somehow get governments out of our pockets and off our backs a little. Not likely but it would be nice.

Braintrust
"This will not replace humans, but will certainly create efficiencies in the process and hopefully the overall customer experience."

"The potential downside is its socioeconomic impact, namely, the loss of jobs for lower-wage workers."

"If the financials make sense, especially in the face of $15 an hour humans, the burger flipper could be very big."