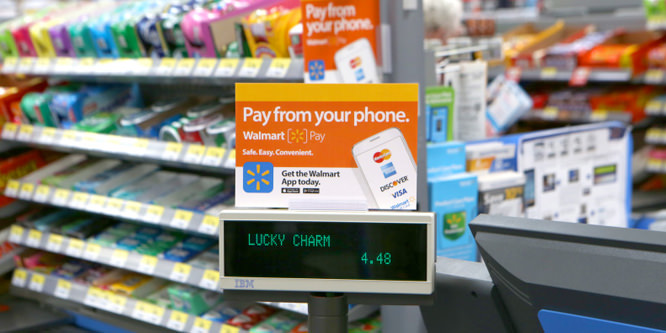 When Walmart launched Walmart Pay within its mobile app earlier this year, one of the primary criticisms was that it worked only at Walmart. Consumers, critics argued, want a payment option that works across many retailers. It appears as though Walmart has come to a similar conclusion following the announcement that it is adding Chase Pay to its mobile app.

According to a Wall Street Journal report, Walmart is adopting Chase Pay primarily to lower the fees it pays for credit and debit card transactions. Chase offers lower fees to retailers that use its back-end system for processing transactions using its mobile payment option.

Back in July, as reported on RetailWire, it appeared as though Walmart felt no sense or urgency to expand mobile payment options for its customers. At the time, the company touted internal surveys that showed three out of four users giving Walmart Pay a five-star rating and 80 percent who would recommend it to others. To further back up the last point, Walmart said it found that 88 percent of purchases using Walmart Pay were coming from repeat users.

Walmart has not offered a comment as yet on whether it will seek to promote one payment option over another or if it will take a laissez faire approach and work with whatever choice is made by its customers.

Both Chase and Walmart’s mobile payment options use QR codes that are scanned at the checkout. One of the downsides to using QR codes is they require users to unlock their phones and open an app to pay for their purchases. Apple Pay, as a point of contrast, uses near field communications technology, which allows users to simply touch their phone at the point of sale to complete a transaction.

DISCUSSION QUESTIONS: Will the addition of Chase Pay to Walmart’s app spur increased usage of mobile payments in its stores? Do you expect Walmart to further expand its mobile payment options going forward or will it stick with its own solution and Chase’s?

Please practice The RetailWire Golden Rule when submitting your comments.
Braintrust
"Mobile pay will become as ubiquitous as credit cards are now. Users will gravitate toward one or two systems on their phones."

"When it comes to digital, Walmart can no longer call the tune and expect everyone to dance."

When will Walmart learn? Why force a consumer to unlock their phones and take a photo of a QR code to make a payment? This slows the checkout process and will irritate consumers. When it comes to digital, Walmart can no longer call the tune and expect everyone to dance.

Trying to control mobile pay systems will be a losing battle in the long run (even at Starbucks). Mobile pay will become as ubiquitous as credit cards are now. Users will gravitate toward one or two systems on their phones. They will move away from systems with any limitations.

Walmart is taking a step in the right direction, but is far from where they need to be. As consumers hold more and more power in the supply chain, offering choices and preferences relevant to them is critical. Walmart should consider making the value and experience inside of Walmart Pay something consumers want to use vs. other options, instead of forcing the issue.

In adding Chase Pay, WMT offers a payment option for its customers. That’s it. So if a customer is an early adopter and wants to use Chase Pay, she can.

Listening to WMT, I’d say it’s working harder to take the friction out of shopping at WMT. WMT is becoming customer centric. Good for them.

Right now, mobile payment options are a low priority with most shoppers. Plenty of retailers are not chip enabled so it’s also confusing at POS. This aspect of shopping is sorting itself. Mag strip readers, chips, QR codes, NFC or ? Recently I spoke with a retailer that still keeps an imprinter and carbons in its stores (for power failures). Hard to rationalize the cost when so few shoppers are using it.

Like everything, the paying with the cell phone will be an option, and really some people will still use cash too. I got a new S7 and it has Samsung Pay. It’s linked to my Chase debit card, so if that works, great. Otherwise, I’ll just use it the same way I have in the past. DUH.

Chip and pin would be my priority before mobile payments. That way retailers make a big statement about protecting their customers credit cards.

Walmart has to follow the path of the consumer. They have taken the right step of attempting to uncover the right tools to serve the customer when they arrive at checkout. Have to keep in mind that the customer has to be traveling to their checkout destination with a smartphone. Prosper Monthly Consumer Survey data tells us that 3 out of 10 adults, 18+ feel highly confident in the use of their smartphone in a manner whereby they answer, “I use my smartphone for all functions — it’s my life.” Walmart shoppers rate a bit higher than 30% in this regard. Just 2 1/2 years ago, 1 out of 4 people held this view. These have been, and will continue to be the early/repeat adopters. Of these 30% of true believers making the statement, 31.5% state that they have made a purchase via their smartphone. That would equate to just shy of 10% of the population as of October, 2016. Naturally, there are heavy users and those who have just begun the journey. Mobile payment… Read more »
0
|
0
-   Share

The addition of Chase Pay to Walmart’s app is mostly about fee reduction, with maybe a little usability and adoption lift as icing on the cake. And yes, I absolutely expect Walmart to continue to invest in mobile payment. Mobile payment significantly improves the experience of Walmart’s loyalty program (Savings Catcher) driving increased adoption. I expect investments will be focused on improving accessibility, adoption and frequency.

A relevant aside — loyalty strategies don’t all have to be about distribution of value to your most valuable customers through coupons and points (although Walmart is doing that), it can be about creating an easier and more enjoyable shopping experience. Mobile payment has that potential, as does membership with perks — like Amazon PRIME. (Adjoy, our company, is another solution in the category of loyalty without coupons.)

Braintrust
"Mobile pay will become as ubiquitous as credit cards are now. Users will gravitate toward one or two systems on their phones."

"When it comes to digital, Walmart can no longer call the tune and expect everyone to dance."