Will the FAA’s new rules speed commercialization of drones? 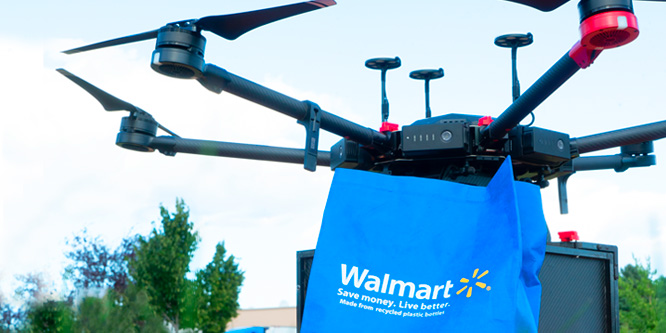 The Federal Aviation Administration (FAA) on Monday issued guidelines that will soon require remote identification for any drone that has to be registered with the FAA in what could expand the use of the machines for commercial deliveries.

Drones will be required to have Remote ID, an identification technology that will enable authorities to track drones.

The FAA said in a statement, “Remote ID is a major step toward the full integration of drones into the national airspace system. Remote ID provides identification of drones in flight as well as the location of their control stations, providing crucial information to our national security agencies and law enforcement partners, and other officials charged with ensuring public safety. Airspace awareness reduces the risk of drone interference with other aircraft and people and property on the ground.”

New rules also relax restrictions for flying drones over people and at night, but add mandates that they be outfitted with anti-collision lights that can be seen for three miles. Currently, a waiver is required to fly a drone at night or over people not involved in the operation of the drone.

The rule for flying over people — which also allows for operations over moving vehicles — establishes four eligibility categories with stipulations ranging from the drone’s weight to the severity of injury they could cause in an accident. Drones also must have no “exposed rotating parts” that could cut human skin.

“The new rules make way for the further integration of drones into our airspace by addressing safety and security concerns,” said FAA Administrator Steve Dickson. “They get us closer to the day when we will more routinely see drone operations such as the delivery of packages.”

Hobbyists have complained about the added regulations, but the Association for Unmanned Vehicle Systems International welcomed Remote ID as “a digital license plate for drones” that “will enable more complex operations.” The trade group added that operations at night and over people “are important steps towards enabling integration of drones into our national airspace.”

The updated guidelines come as Amazon, Walmart, Google and UPS continue to methodically test drone use for delivery.

DISCUSSION QUESTIONS: What safety protocols would you like to see before drones start delivering packages in your neighborhood? Are the FAA’s new rules a significant step toward alleviating the safety and security concerns involved in drone delivery?

Please practice The RetailWire Golden Rule when submitting your comments.
Braintrust
"Drone delivery is coming. I’m not sure that security measures are enough to safeguard us against visual pollution and malicious intrusion."

"I predict that this will be about as popular as loud cellphone conversations on planes."

"As a private pilot, I would certainly expect that drone restrictions and regulations would be just as clearly enforced as they are for general aviation..."

7 Comments on "Will the FAA’s new rules speed commercialization of drones?"

Lights that can be seen for three miles — ugh. Imagine the sky at night filled with drone lights. Imagine the potential for malicious or terrorist drones through neighborhoods.
On the plus side is the reduction in the carbon footprint for delivery.

Drone delivery is coming. I’m not sure that security measures are enough to safeguard us against visual pollution and malicious intrusion. I don’t see rules in place for either of these problems.

If drones are at a height where they are quiet and unobtrusive then that’s fine. However if they are too low and too noisy I can see them being used for target practice by some annoyed homeowners.

I predict that this will be about as popular as loud cellphone conversations on planes.

Amazon trucks or other delivery trucks can carry a significant number of items, with items of sizes and weights that I don’t see as practical for drones to carry. To replicate the carrying capacity we would have to have a large number of drones in our sky some of which would have to be larger than what most people would be comfortable seeing flying in their neighborhoods. I can foresee a time when there are articles about drone pollution in our sky, their negative impact on birds, etc.

This is a great start to the unavoidable use of drones in our lives. Establishing safe guidelines determines how, when, and why drones can be used and the ways they can be used in our complex society. Any time we can use a drone to drop off a box instead of sending a person in a truck to do it we have a smaller impact on our planet’s health, and sometimes a better, more efficient way to provide alternate solutions to long-term issues.

The new rules give the drone service industry permission to move forward; they’ve been waiting for FAA guidance. Drones are here. This will greatly accelerate the acceptance and use of drones with multiple applications.

Braintrust
"Drone delivery is coming. I’m not sure that security measures are enough to safeguard us against visual pollution and malicious intrusion."

"I predict that this will be about as popular as loud cellphone conversations on planes."

"As a private pilot, I would certainly expect that drone restrictions and regulations would be just as clearly enforced as they are for general aviation..."