Walmart pilots its way into the drone delivery race 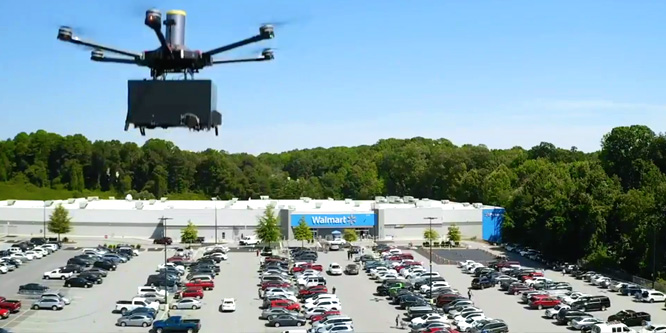 What would Orville and Wilbur Wright think? What would Sam Walton think, for that matter?

Walmart released news yesterday that it has launched a drone pilot program to test on-demand delivery of groceries and select household essential items in North Carolina, the state where the famous brothers took flight with their powered aircraft in 1903.

Tom Ward, SVP, customer product, Walmart, wrote on a company blog that the retailer began testing drone deliveries in Fayetteville yesterday. In making the announcement, Mr. Ward pointed to the spirit of Walmart’s founder Mr. Walton who said, “I have always been driven to buck the system, to innovate, to take things beyond where they’ve been.”

“We know that it will be some time before we see millions of packages delivered via drone,” wrote Mr. Ward. “That still feels like a bit of science fiction, but we’re at a point where we’re learning more and more about the technology that is available and how we can use it to make our customers’ lives easier. Take for example our autonomous vehicle work with Gatik, Ford and Nuro — we’ve gained loads of valuable insight into how autonomous vehicles fit within our business.”

Walmart’s drone test puts it among a list of retailers, including Amazon.com, CVS, McDonald’s, 7-Eleven and Walgreens, that are doing the same.

The Federal Aviation Administration approved Amazon Prime Air as an official “air carrier” last month, enabling the company to get its commercial drone delivery program off the ground in the U.S.

DISCUSSION QUESTIONS: Does Walmart’s drone test signal that the timetable for making deliveries in this way is being substantially moved up? How do you see drones fitting in with various other forms of delivery using autonomous vehicles?

Please practice The RetailWire Golden Rule when submitting your comments.
Braintrust
"The race is on to implement the latest in last-mile delivery. Anything to get packages to customers faster and cheaper. "

"I absolutely love this. It’s another great example of COVID-19 being the Change Accelerator."

"Now the question is, how the consumers are going to respond do this? What new set of issues might this bring?"

Let the drone wars begin! Walmart does not do science experiments. Walmart does not want to be second to anyone in this race and will be nipping at Amazon’s feet ever so closely. They will get this right while continuing to work on other forms of autonomous delivery is my guess.

The race is on to implement the latest in last-mile delivery. Anything to get packages to customers faster and cheaper. This year’s surge in e-commerce shopping due to the pandemic has definitely moved up the timeline on many trends. What may have taken five years to come to fruition has all been packed into one crazy year.

This is a great learning exercise and it is good to see Walmart testing and trying new things. However as Walmart themselves have said, this is really experimental and not a step to having thousands of Walmart drones buzzing around delivering products to customers. In the future, I am sure drones will play a role in mainstream fulfillment, but we are a long way off from that stage.

Yep, Neil, I agree. I do, however, think there are some scenarios that could be well served by drones and perhaps their day will come faster with this move. Being a boat person myself, I can think about the many the times we have had engine, or boat, trouble at the most inconvenient times. Wow, how drone delivery would have been a help. Try finding someone willing to go purchase a part for you and then get it to you off shore. Just sayin’, for my 2 cents.

Retail leaders have hit the fast-forward button on drone delivery. Drones would deliver speed and convenience, which are essential to earn happy, loyal customers.

By contrast, autonomous vehicles are ideal for urban consumers and larger, heavier orders.

The timetable for making drone deliveries certainly seems to be moving up given the significant increase in online orders and deliveries during this pandemic. Now the question is, how the consumers are going to respond do this? What new set of issues might this bring? A lot is yet to be discovered but it seems to be a step in the right direction at this time and in this environment.

It will still be some time before delivery by drone takes flight. (See what I did there?) Packages are limited to around 10 pounds, drones can only travel short distances, require FAA clearance, require human oversight – and more importantly, not everybody lives with a large landing pad in their backyard.

That said, autonomous vehicles do have a place and could be used now. I opined in this piece that small rolling vehicles could be used for contactless curbside pickup by any retailer/grocer today. With the size of Walmart’s parking lots, I am surprised they aren’t doing this now.

It is beyond comprehension, the race to fill our skies with drones as a last-mile delivery convenience to customers. The 12-second Walmart video only shows one ugly drone, imagine drone delivery at scale. It seems Amazon and now Walmart is predicting a homebound future where we humans shelter in place for relief from the noise and daylight darkness of drone filled skies. Biking, taking walks, driving a car through a neighborhood will become dangerous activities. Surreal. Are we as consumers connecting the dots? Why work to save the climate when no one will want to go outside to avoid the noise and risk of being hit by a drone, dropping out of drone filled skies? Is getting a delivery an hour earlier worth disrupting the serenity of nature? Sounds like big multi-national corporations will soon be in control of our great outdoors and our skies above towns, cities, and rural areas. Something for all of us to consider before it is too late.

Competition is good! Amazon, while apparently being the first to market with this delivery concept, shouldn’t “own” the drone delivery industry. Having a player like Walmart in the game – and any other retailers who choose to get into drone delivery – will force both companies to give it their best in terms of quality, experience, pricing and more. I’m looking forward to seeing how this plays out. The future is now!

I absolutely love this. It’s another great example of COVID-19 being the Change Accelerator.
Technology that was met with skepticism like this now has a new raison d’être, being a way to achieve contact free delivery. Alongside autonomous wheeled vehicles like Starship whereby the differentiation is about population density – wheeled vehicles being more suitable for urban areas with drones for suburban environments.

Every retailer is seeking a better way to handle the proverbial last mile. Walmart has now officially joined, as Zel so aptly put it, the “drone wars.” I do find it interesting that every example or demo I have seen is in a suburban or rural setting where there is plenty of space for the drone to “drop” the delivery and only one or two people on the ground to receive the package.

These are environments where the number of drones delivering items would be limited. I cannot help but wonder what would happen in an urban market. My expectation is that these areas are where another last-mile delivery process would be utilized.

I’d suggest starting this off in cities with a very calm weather pattern and very little wind. I’d also suggest that whomever is assigned to packing the bags does a really good job of balancing the cans, jars and fruit to not tip the drone. Lastly, it will be a long time if ever before my city, the Windy City, will be part of the rollout. 😉

I think Walmart joining the fray for sure will move up the timetable. Still curious as to how this can work, logistically, but I can see drones able to make a deliveries on a substantial % of packages sent, based on size/weight. (Based on what I see arrive on my doorstep seemingly every day….) Unsure as to what will be most cost effective and will be interested to see how this plays out.

When it comes to drones, there’s no one-size-fits-all. Different geographies, different products, different retailers should find a different mix of autonomous delivery vehicles that fit their customer needs. I love tech, Apple can verify I spend far too much money on it, so I’m excited about this one. Glad Walmart is at least testing drones and it’s also a smart business (and PR) move.

To be honest, I am surprised that drone delivery is not already in the marketplace. As part of a high school exit project two years ago, my son tested drone safety in a retail delivery scenario here in Charlotte, NC.

The test drone, when loaded with an item, stopped its forward motion and diverted when encountering cars and people. It was able to precisely deliver a box to a targeted spot and return to its place of origin.

A hospital in Raleigh, NC began delivering samples, including blood, between its WakeMed Hospital surgical center and the primary testing lab at its main campus in April, 2019.

Drone delivery is not the future. It is today. By the way, my son made an “A” on his project. 🙂

I think some day, probably sooner than the more pessimistic think, we’ll see autonomous delivery; but I’m thinking for specialized reasons — high value/emergency/low access — and while Walmart isn’t the lowest on that list (surely that dubious “honor” goes to 7-Eleven — droned Big Gulp anyone?), I don’t see it the highest either. I just don’t think the case for reliability and cost has been made yet, once the cold light of reality is brought into the claims.

“I can do anything you can do, better!” The new Walmart battle cry is clear! They are not going to let Amazon or anyone else steal the limelight when it comes to new retail technology.

While it appears the interest level in developing viable drone delivery solutions has definitively increased, it’s still not clear how quickly these services can be brought to market at scale. In limited usage areas, sure, we may start to see this in the next few years, but I suspect we are still 8-10 years out from networks of drones filling our skies to fulfill our e-commerce orders.

We should not forget that this is only a test. This is not a race, not a competition, not a one-up position. Tom Ward may have many statements in this article, but he is forgetting Sam Walton and his main position … the customer. Unlike Tom Ward, I met Sam Walton several times as he brought hats and donuts to stores outside of Bentonville, when I lived in Tulsa, and called on many Walmart stores in the Missouri, Oklahoma, Arkansas, Texas area in the early 1980s. His pride rested with making his customers and his employees happy. This was translated into world-class customer service, loyal customers, and beautifully run stores that were his pride and joy. It was not having the latest technology or running the race for the first to have a new system in place.

Braintrust
"The race is on to implement the latest in last-mile delivery. Anything to get packages to customers faster and cheaper. "

"I absolutely love this. It’s another great example of COVID-19 being the Change Accelerator."

"Now the question is, how the consumers are going to respond do this? What new set of issues might this bring?"