Would LVMH-ownership be a good change for Tiffany? 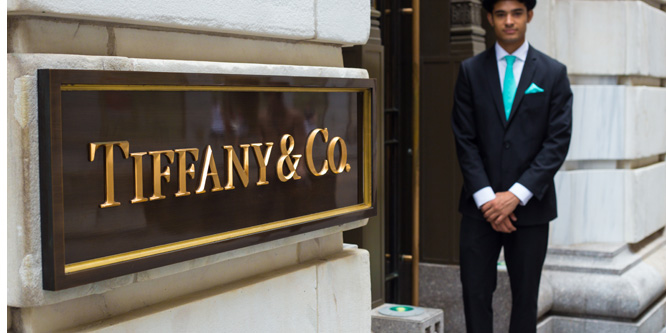 Tiffany confirmed Monday that it is reviewing an all-cash proposal for $120 per share from LVMH, the French luxury goods giant.

Shares of Tiffany catapulted $31.17, or 31.6 percent, by Monday’s close to $129.72. Tiffany is expected to push for a higher price, and rivals Kering and Richemont are expected to consider making offers. LVMH’s $14.5 billion offer represented a nearly 22 percent premium to Tiffany’s closing price on Friday.

For LVMH, Tiffany would help diversify its offerings that are dominated by fashion and also help them compete in the jewelry space against Richemont, the owner of Cartier and Van Cleef & Arpels. As of January, LVMH’s jewelry and watch unit — including Bulgari, Chaumet Hublot and Tag Heuer — only brought in nine percent of the company’s revenue. Tiffany is the second largest jeweler after Cartier.

LVMH’s jewelry brands could presumably land on Tiffany’s selling floors and the jeweler could collaborate with many of LVMH’s 75 different brands. LVMH’s fashion businesses include Louis Vuitton, Christian Dior, Marc Jacobs, Fendi, Givenchy and Le Bon Marché. Other brands include Dom Pérignon, Moët and Hennessy in the spirits category; Sephora, Fresh and Benefit in beauty; and Rimowa luggage.

The move by LVMH would also boost its presence in the U.S, its second largest market after Asia, representing a quarter of revenues.

Tiffany’s current CEO, Alessandro Bogliolo, has emphasized a strategy of building sales in China and LVMH could guide the expansion.

Any acquirer would assume the challenge of reviving the 182-year-old luxury jeweler’s sales, which have been stagnant to declining in recent years. Tiffany’s U.S sales have been hurt by a slump in U.S. tourism due to the stronger dollar and a slowdown in China’s economy.

Tiffany’s is involved in more complicated revival efforts as well, such as reframing its image to make the brand hipper to Millennials who are looking for more experiences and a less formal version of luxury. The retailer has so far done an extensive revamp of its 57th street flagship, adding an Instagram-friendly cafe, its first men’s collection and an ad campaign featuring Lady Gaga.

Please practice The RetailWire Golden Rule when submitting your comments.
Braintrust
"Tiffany needs a luxury giant (vs. non-luxury player) to leverage its enviable reputation and rich expertise in the strong-performing luxury jewelry category."

"Finally a strategic acquisition – not a private equity takeover! I think this move makes lots of strategic sense for all brands involved."

"If this acquisition can speed Tiffany’s entry into the massive China market, everyone wins."

7 Comments on "Would LVMH-ownership be a good change for Tiffany?"

Finally a strategic acquisition – not a private equity takeover! I think this move makes lots of strategic sense for all brands involved. LVMH is arguably the leading luxury conglomerate in the world, and adding Tiffany’s would be a great fit. While other acquisitions might make sense, I’d be hard pressed to think of a better fit than LVMH.

Amen. If this acquisition can speed Tiffany’s entry into the massive China market, everyone wins.

LVMH acquiring Tiffany is logical for both sides. LVMH would get a new division that it could grow and Tiffany would benefit from the global expertise and reach of a luxury conglomerate. The sticking point is the price: Tiffany executives clearly feel that they are at the start of their journey and see strong potential for the brand; that means they will want a premium for the business. It remains to be seen whether LVMH is prepared to meet that price.

An LVMH acquisition would invigorate the iconic Tiffany brand. LVMH would increase Tiffany’s access to foreign markets, decrease risk amid fierce competition and gain superior ability to scale. Tiffany needs a luxury giant (vs. non-luxury player) to leverage its enviable reputation and rich expertise in the strong-performing luxury jewelry category.

LVMH is the unquestioned global luxury brand leader, period. The iconic 182-year old U.S. brand that captured American luxury aspirations in the character of Holly Golightly will gain global prominence within the LVMH maison structure. LVMH in turn will gain greater luxury consumer insights in the U.S. while complementing existing Bulgari and Hublot brands. The final price will be well north of the current offer, but I expect agreement to be reached and for Richemont’s Cartier to have a new deep-pocket competitor coiled for global expansion growth.

If this acquisition would go through, it would be a win-win for both luxury powerhouses. From an LVMH brand portfolio perspective, it would be adding a significant global player, Tiffany into their aggressively expanding luxury jewelry segment. The Tiffany team has made significant strides in transforming the image of the company and adapting to the needs of the emerging Millennial and Gen-Z shoppers.

With that said, the Tiffany brand is a valuable commodity and the recent stock price prices have increased quite a bit since the announcement, as well as the improved overall performance of the brand. While on the surface, the deal makes complete sense for both companies, we should expect to see both Kering and Richemont make competitive offers as well. Let’s see how this plays out over the coming weeks.

Overall, it’s extremely encouraging to hear about a strategic acquisition that is focussing on growth, expansion and combining forces.

There are two (quite opposing) viewpoints possible here; one is the technocrat/banker who always thinks “bigger is better” — more resources, more locations, higher “management fees”, etc. It always looks very convincing in the spreadsheets. The other is what might be called the “entrepreneurial” viewpoint: bigger kills creativity and service and … the whole point of a competitive economy.

So who’s right? I’m siding with the (Financial) Luddites: the world isn’t better off as it moves to a state where every company is “… a subsidiary of (insert name of conglomerate here).”

Braintrust
"Tiffany needs a luxury giant (vs. non-luxury player) to leverage its enviable reputation and rich expertise in the strong-performing luxury jewelry category."

"Finally a strategic acquisition – not a private equity takeover! I think this move makes lots of strategic sense for all brands involved."

"If this acquisition can speed Tiffany’s entry into the massive China market, everyone wins."