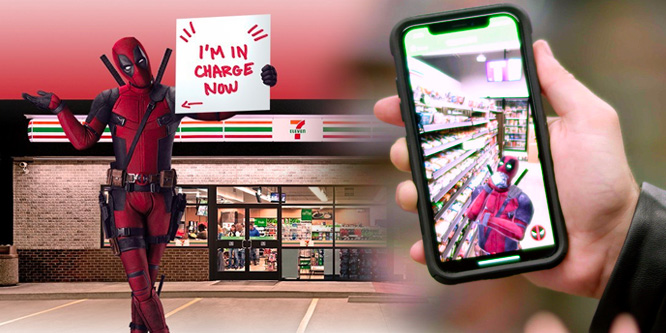 The sequel to the record-setting 2016 movie reaches theaters May 18.

The Deadpool AR experience is accessible through the 7–Eleven app. Users tap the camera icon on the home screen of the app and see the main character appear to guide the experience.

Users take a selfie and then watch the Deadpool scribble all over the photo with his red marker. Users are then encouraged to head to their local 7-Eleven to find “zap codes” or scannable codes throughout the store that unlock new activities and 7Rewards bonus points.

“With Deadpool, you learn to expect the unexpected,” said Sean Thompson, 7‑Eleven’s SVP and chief customer officer, in a statement. “7–Eleven has a few more surprises planned as well, both inside and outside the store, and when you least expect it. Stay tuned. The fun is just beginning.”

Users are encouraged to share their interactions inside stores with Deadpool fans across social media.

The promotion also includes Deadpool-themed products and a sweepstakes promotion scanned with the 7–Eleven app at checkout.

The popularity of Pokémon Go in summer 2016 that saw a record-breaking 130 million people download the free gaming app led to predictions that augmented reality apps would go mainstream as a marketing tool. But since that time, retailers have mostly used AR to help boost the in-store experience (virtual mirrors and closets) and online experience (i.e., seeing how furniture appears in homes).

A survey of 140 business leaders involved in VR or AR by Perkins Coie, an international law firm, found two-thirds expecting the AR market overall would surpass the VR market in revenue. However, 57 percent agreed that the biggest obstacle to mass adoption of AR technology was the user experience (e.g., technological limitations, technical glitches). That was followed by the related content offerings (25 percent), cost (14 percent), consumer and business reluctance to embrace AR (10 percent) and financing and investment (4 percent).

DISCUSSION QUESTIONS: What do you think of 7-Eleven’s Deadpool AR campaign? Will AR’s gaming capabilities translate into a significant marketing and traffic-driving tool for retailers? Did the Pokémon phenomenon overly inflate expectations for retailers and marketers?

Please practice The RetailWire Golden Rule when submitting your comments.
Braintrust
"A very campaign-based execution of AR, and for those hardened Deadpool fans I’m sure this will be interesting enough to give 7-Eleven an uplift."

"There is usually excitement and enthusiasm in the beginning when something is new but once the novelty wears off it’s boredom and onto something else."

"I expect they will find that many people who will buy tickets to see the movie will not want to participate in the AR experience at their stores."

While I don’t think this will do any harm to 7-Eleven, it does seem like a gimmick. I would be interested to know how many people it drives to stores and how many of those end up making a purchase.

Admittedly, Pokémon Go was successful – but it was a one-off craze that everyone now wants to replicate. Some of the efforts feel a little forced.

This is a very campaign-based execution of AR and for those hardened Deadpool fans I’m sure this will be interesting enough to give 7-Eleven an uplift. The wider application of AR in retail stores certainly has bigger potential. Tied to loyalty, it brings the ideas of personal pricing and automation a step closer.

With the majority of shoppers expecting AR will impact their shopping experience, I’m with Sunny that 7-Eleven will see a lift. It’ll likely be a lift somewhat beyond Deadpool fans and regular 7-Eleven customers as AR still has a cool factor that people want to check out. Of course, there’s much greater potential as a platform tool that retailers haven’t quite figured out in practice. We’ll continue to see these campaign-based AR implementations until things like personalized pricing and automation reliably create AR experiences as more than one-off programs.

While AR’s gaming capabilities have the potential to augment traffic and sales, they have limited applicability in the retail space in that gaming is not for every retailer and for every age group. It may do well for 7-Eleven and similar retail segments.

I agree with Neil Saunders — this may be a bit forced. The Pokémon experience was new and different — once these types of promotions become more frequent expect them to be less effective, just like any other form of promotion becomes less impactful as it is repeated.

Deadpool and 7-Eleven promotion makes sense for both partners. 7-Eleven taps into a hot franchise with a new promotional tactic, while Deadpool reaps the benefits of 7-Eleven’s marketing campaign, and perhaps a significant licensing fee. Even if this promotion doesn’t attract Pokémon Go numbers, it can still work well and fulfill its mission, for both partners.

7-Eleven’s Deadpool AR campaign is an excellent concept and will probably be attractive to many customers. The problem I see though, is for how long? Every day there is another app, another new game or another pitch to try this technology for this or that. How many apps have you downloaded in the last year that you no longer even use or worst yet, you’ve already deleted them because you no longer find them appealing? The point is that the public gets bombarded with so many new concepts involving apps that they cannot remain focused on any one idea too long. There is usually excitement and enthusiasm in the beginning when something is new but once the novelty wears off it’s boredom and onto something else. I see this as a possibility with 7-Eleven’s Deadpool AR campaign. And if I’m right, it seems to be a significant investment for short-term success.

For 7-Eleven’s primary demographic, this will likely be a strong marketing program for them. However, beyond the initial curiosity of experiencing the AR, the promotion has to deliver value to both the consumer in the form of tangible promotions and with 7-Eleven in the form of increased revenue. Increased foot-traffic is only as good as the percentage increase in conversions.

It may be a gimmick, but good for 7-Eleven to do something more than the standard film launch moves. There has been a buzz about Deadpool on social media for weeks, fans are ready.

I like that 7-Eleven is changing activities weekly, obviously geared toward bringing fans back again and again to pick up another Big Gulp. Pokémon Go had 65 million users in the U.S. seven days after it launched so there is potential here. I’m optimistic, this will be fun to watch.

At one time 7-Eleven and other c-store retailers sponsored 3-D movie broadcasts in local markets and sold the necessary glasses in their stores for viewers. In some cases it was a large financial success and in others it resulted in a financial loss. IMHO this will fall somewhere in between. 7-Eleven will gain some traffic, but I expect they will find that many people who will buy tickets to see the movie will not want to participate in the AR experience at their stores.

Good move 7-Eleven. The AR campaign is right on in terms of demographic and the campaign approach involving Deadpool-branded products and promotion should bring a lot of consumer interest and fun.

The bigger opportunity here is for 7-Eleven to create a series of these promotions that encourage customers to come back again and again, and there’s nothing wrong with events that lure younger customers. Imagine cross-promotions for the Indianapolis 500, or the Super Bowl.

This is a good promotion. Even if this is a “fad” like Pokémon, the connection with the customer base that are fans of Deadpool will potentially boost revenue short term and build a larger customer base long term. This is an interactive concept — like gamification — that will appeal to a demographic that is important to 7-Eleven.

Obviously the retailer wants to do three things: Lure customers, engage them in the store, and sell more product to justify this promotion. My prediction: This gimmick might do the first two, but not the third.

The 7-Eleven + Deadpool partnership certainly is a fit. If this campaign is successful, I would anticipate future Marvel + 7-Eleven promotions.

I’m glad to see that they are incorporating the 7Rewards bonus points into the experience as it gives some more longevity to the impact — a user might download then delete the app if it was stand alone, but when points are involved people are more reluctant to remove. Would love to know how many new users they have signed up due to this AR interaction.

Braintrust
"A very campaign-based execution of AR, and for those hardened Deadpool fans I’m sure this will be interesting enough to give 7-Eleven an uplift."

"There is usually excitement and enthusiasm in the beginning when something is new but once the novelty wears off it’s boredom and onto something else."

"I expect they will find that many people who will buy tickets to see the movie will not want to participate in the AR experience at their stores."