Aldi gets creative for Christmas 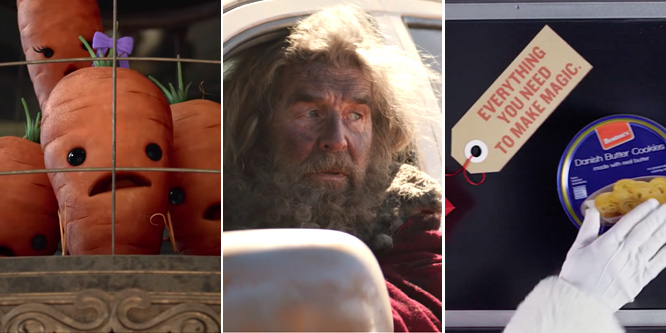 Aldi, the German hard discount grocery giant, is known for its private labels and low prices in markets around the globe. While the value emphasis is central to its marketing efforts worldwide, how it communicates to its customers can vary widely by country. Three cases in point are the very different commercials developed by Aldi’s business units in Australia, the U.S. and the UK for Christmas 2018.

The popularity of the spots on YouTube differs dramatically, as well. Aldi UK’s “Kevin the Carrot and the Wicked Parsnip” has been viewed nearly three million times on YouTube since it was published on Nov. 7. On the other end is Aldi USA’s “Shop Differentli” commercial, which is displaying a count of just over 100 views since being launched four days ago. Aldi Australia’s “Santa Crashes Christmas” sits in the middle with nearly 871,000 views on the social channel.

Aldi UK’s Kevin the Carrot is back for the third year running. The grocer has marketed the popular character in merchandise, including plush toys that led to long lines outside the chain’s stores in England last week. Last year’s version of the Kevin the Carrot toy sold for up to £1,000 on eBay, which may explain why Aldi UK’s Twitter feed described old people and children being knocked around by grown men rushing into the store to find the toy.

The “Santa Crashes Christmas” spot looks to simultaneously capture the spirit of the season as well as the Australian people. Aldi USA’s spot keeps it simple and makes the case that it can fulfill many of its shoppers Christmas needs (even one from way up North).

DISCUSSION QUESTIONS: What is your critique for each of the three Aldi Christmas commercials from Australia, the UK and the USA? Do you approve of Aldi USA’s approach to Christmas marketing or do you think it would benefit from a more ambitious campaign like its sister divisions in Australia and the UK?

Please practice The RetailWire Golden Rule when submitting your comments.
Braintrust
"It appears the commercials are a function of the status of the brand development in the three countries. "

"The U.S. spot appeared simple and direct with a clear message. It gets my vote."

"I am sure Aldi U.S. will learn quickly and make it much better next time, taking advantage of successful Aldi campaigns in other countries."

6 Comments on "Aldi gets creative for Christmas"

The U.S. commercial of Aldi looks awful. I am sure Aldi U.S. will learn quickly and make it much better next time, taking advantage of successful Aldi campaigns in other countries. The U.K. campaign looks great, for example.

The U.K. spot was entertaining. However, I’m not sure what the intended message was or the point of differentiation relative to Aldi. I didn’t quite get the Australia commercial. Purpose? The U.S. spot appeared simple and direct with a clear message. It gets my vote.

This is subjective. The carrots take it all, but I did get a little bored with the length. The other two, I’ve got nothing! If I would have been in the agency review on those two ads …. But that’s just my opinion.

I hate to say this, but the U.S. ad is the only one that makes a point and I can’t feel bad about that (reindeer hooves is a cute touch).

It appears the commercials are a function of the status of the brand development in the three countries. Aldi is unknown to U.S. audiences, so a similar spot to the Australian commercial would be esoteric. The U.K. spot is beautifully produced and it has a bizarre charm to it, but when you are a well known brand, you can push the envelope. I believe Aldi is still introducing their brand in the U.S., so it has to be more didactic. The spot has charming Christmas details and the more consumers see it, the more they will pick up on them and become curious about the brand. One critique is that it is an old-fashioned stand-alone TV spot without legs in social media — I checked, and it could have easily been extended to their website and social media accounts. Eventually, Aldi’s brand might be able to do more ambitious advertising, but for now they need to ensure their advertising works in the consumer environment of the U.S., and extending their message from TV to other… Read more »
1
|
0
-   Share

In all three the brand messaging is a small logo unlike what many of us are used to in the U.S. The U.K. Aldi ad gets my vote. It’s very entertaining and indirectly highlighted the items you could buy for a Christmas dinner. It’s something that works well in the U.K. where Aldi is an established brand. Doubt it would be an effective message in most of the U.S. — yet.

The Australian commercial had a very indirect message and didn’t really effectively sell the brand or any of Aldi’s products. The story it told was ok, but not as entertaining as the UK ad. Worked as something the you watch once and then fast forward through the next time.

I agree with Chris that the U.S. commercial wasn’t particularly good. We have become accustomed to Christmas ads having a story and being entertaining, so this might have tainted my perception of the ad. It did at least highlight some of the items you could purchase at Aldi.

Braintrust
"It appears the commercials are a function of the status of the brand development in the three countries. "

"The U.S. spot appeared simple and direct with a clear message. It gets my vote."

"I am sure Aldi U.S. will learn quickly and make it much better next time, taking advantage of successful Aldi campaigns in other countries."