Aldi UK vs. Lidl (Germany) match up in the RetailWire Christmas Commercial Challenge 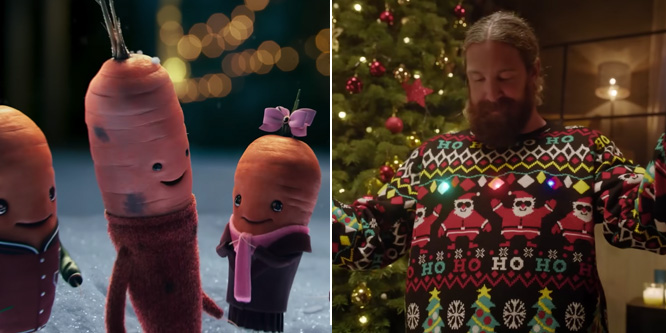 The RetailWire Christmas Commercial Challenge may not rise to the competitive level of the World Cup but, for this week at least, it will bring together two international grocery powerhouses — Aldi and Lidl — each with their own holiday stories to tell.

The winner of round five of our annual competition will go up against previous winners — Etsy, Kroger, Publix and Amazon — to see who will take home the crown for the best Christmas commercial of 2022.

Aldi’s spot from its UK division brings back its famous Kevin the Carrot character and his family in their own “Home Alone” take on the holiday. The spot, which has been viewed more than 4.2 million times on YouTube, marks the sixth year that Kevin has been featured in Aldi UK’s commercials.

Lidl’s Christmas spot wants its German customers to know that they can relax because they will be able to find everything they need for the holidays. The spot, which features a take on Lionel Ritchie’s “Easy” as the soundtrack, has been viewed more than six million times on YouTube.

DISCUSSION QUESTIONS: What is your critique of the Christmas spots from Aldi UK and Lidl? Which retailer does a better job of connecting with its core customers while reaching out to new shoppers with its Christmas spot?

Please practice The RetailWire Golden Rule when submitting your comments.
Braintrust
"Let’s be honest, what’s not to like about anthropomorphic carrots?!"

"Big thumbs up for Lidl and the Dude."

"I’ll be honest, I don’t like either one of them."

16 Comments on "Aldi UK vs. Lidl (Germany) match up in the RetailWire Christmas Commercial Challenge"

Nice spot from Lidl. However the story and narrative are a bit weak and it just lacks depth. Quite honestly, it could have been an ad for almost any food retailer.

By contrast, Aldi’s spot is funny and builds on the popular Kevin the Carrot franchise — which Aldi has built over recent years. The imitation of Home Alone is clever. And let’s be honest, what’s not to like about anthropomorphic carrots?!

They are both good but my vote goes for Aldi — I love the Home Alone reference (down to the mother’s hair style). The Lidl commercial reminded me of The Big Lebowski.

I didn’t think about The Big Lebowski but, now that you mention it, it feels like all the dude needed was a rug to pull the room together.

My vote is for Aldi. Kevin the Carrot is pretty funny and the Home Alone reference is quite good. Lidl’s ad was a bit shallow.

I’m not a Home Alone fan — though the parody with the carrot family was funny. The best part was the carrot as a snowman’s nose. I just couldn’t figure how this fit with food and Aldi — except for one shot where they had a lavish meal set out before popping the burglars at the mail slot.

The Lidl ad was more down to the core message of family and more realistic. Not as unique perhaps, but it covered what many folks think about when considering the holidays. My vote goes to Lidl.

Two really good entries. I think Aldi was the better ad — the story line was easier to follow.

I’ll be honest, I don’t like either one of them. Kevin the carrot was cute, however there already is a commercial with a similar theme with Kevin Hart and Catherine O’Hara. And it’s funny.

The Lidl spot was confusing. Was the man supposed to be a hipster Santa Claus or just some guy? Either way, it didn’t do much for me. There was way too much going on and a lot of it didn’t tie together.

Sorry, this contest is a tie of meh for me.

I had the same issue with Lidl: at one point I thought he was blind — and thought we’d drift off into some PSA moment about disabilities, then he skateboarded and I thought “I guess not” — or may hope not! — so I ended up not really getting much out of it. And of course not speaking German disallowed the closing narration clearing things up.

Not my favorite pair of challengers but I give my vote to Kevin the Carrot.

Aldi utilizes a carrot family recreating Home Alone. It appears they have used the carrot before so consumers will relate. The table food display is wide. Good execution. Lidl uses a non-conformist almost Christ-like Christmas Day cook and host. The idea that all your cooking needs can be found at Lidl is limited to showing two grocery bags. Based on food presentation, I give Aldi my vote.

Oh dear: I saw the teaser about animated carrots and I thought “Finally! Leave it to the Germans to show us all about Christmas.” Unfortunately it didn’t work out that way: I spent the whole time worrying about the carrot’s fate (first getting stepped on in the airport, then … well … eaten) And I’m still not quite sure what the story line was supposed to be (maybe it was pro-carnivore? 🙂 ) Nevertheless, I’m going with that, the Lidl spot was just too brassy.

Not my favorite pair of challenges either, but I like how Aldi’s Home Alone inspired fun will catch the attention of many viewers and the character ultimately becoming a roasted carrot.

Neither ad really ties itself to the respective retailer. However, based on the continuity of presentation by Aldi, viewers know the retail brand and look forward to the annual presentation of Kevin the Carrot. Home Alone and Kevin never grow old. Vote for Aldi UK.

I’m sure Aldi’s spot resonates with the UK audience since it sounds like they’ve been building on Kevin the Carrot for some time and he makes for a great parody for the Home Alone movie. Though it’s entertaining, I didn’t get those chummy Christmas gathering feels.

Lidl gets the point across … even the seemingly single guy, with a not-so-easy voice, can make a holiday meal for a family gathering with ease and in spite of the holiday chaos in the beginning. Lidl gets my vote!

Aldi’s UK spot was a clever recreation of Home Alone from a unique perspective. For their intended audience, the spot ties nicely with Aldi’s Carrot Family characters and toys. Lidl’s advert was even more clever as it relied less on the main storyline of the Big Lebowski, but leveraged the character and charm of the Dude, who abides by going with the flow while preparing the holiday meal for a large family gathering. Lionel Ritchie’s “Easy” plays in the background to emphasize how simple it is to prepare a large meal with Lidl’s help.

Big thumbs up for Lidl and the Dude.

They are very different commercials. One is about the brand, the other is a retail message.

Aldi’s brings the branding with memorable characters from previous years. There’s an established connection with consumers; if they continue with this concept, it will become a Christmas tradition.

Lidl’s spot is interesting and relevant to consumers. Lidl does an excellent job of offering consumers the relaxed and joyful season we all want. However, it misses badly in branding and the occasion. Change the logos and it can be anyone’s spot. Change the wardrobe and it can be an easter spot.

Braintrust
"Let’s be honest, what’s not to like about anthropomorphic carrots?!"

"Big thumbs up for Lidl and the Dude."

"I’ll be honest, I don’t like either one of them."