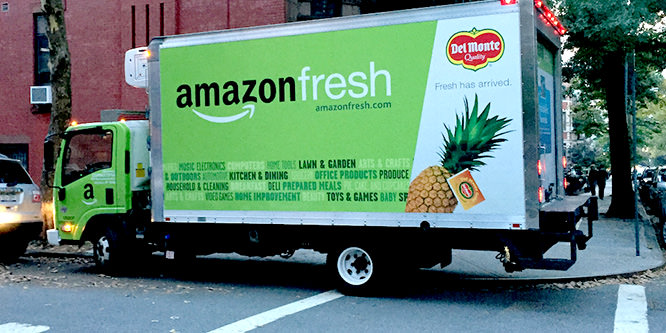 How big an impediment to growth has the $299 annual fee been for the AmazonFresh online grocery delivery program? The company may soon find out with a new program that essentially lowers the annual subscription fee by adding a monthly payment of $14.99 on top of the annual $99 paid by Prime members.

To be sure, the nearly $279 it will cost members over the course of a year is not a huge savings, but avoiding the bigger one-time outlay of funds is viewed as a more attractive option for Millennials and other Prime members who have yet to join AmazonFresh.

The new $14.99 fee is being positioned as an add-on to existing Prime memberships. Current Prime members who are not using AmazonFresh have the option of a free 30-day trial before they begin paying the monthly fee. According to GeekWire, current AmazonFresh members will continue under their existing program until it expires and then will be moved to the monthly fee. Those who want to make the switch before their year ends, can do so by calling Amazon customer service.

The e-tailer is taking this step as it faces increased competition from groceries. Kroger, Walmart and other grocers have been ramping up click and collect efforts. Pure-play rival FreshDirect recently raised $189 million, the largest round of funding in its history, from investors led by JP Morgan Asset Management. Jet.com, which has been ramping up its grocery business, is now part of Walmart.

DISCUSSION QUESTIONS: Will positioning AmazonFresh as a $14.99 monthly add-on to existing Prime memberships increase enrollment among Amazon customers? Are there other steps you think Amazon will need to take to achieve significant growth with AmazonFresh?

Please practice The RetailWire Golden Rule when submitting your comments.
Braintrust
"I think that the $14.99 per month fee will significantly lower the barrier to adoption for many Prime members."

"Amazon definitely needed to do something to make its offering more appealing and accessible to mainstream households."

"The high entry point also served to limit the immediate adoption so Amazon could take a small step approach to working out the kinks."

Charging by the month, rather than by the year, may make the subscription fee easier to swallow. Still, it will remain a barrier for many people to sign up. If Amazon wants to drive consumers to AmazonFresh, it should cut the fee to $9.99 a month or less, or offer a three month free trial.

I would never add $14.99 a month to my grocery bill, but devotees of Amazon will. There are millions of shoppers for whom Amazon Prime is embedded deeply into the reptile portion of the brain. For them, shopping with Amazon is synonymous with shopping itself, and they’ll perceive the monthly fee as do-able. I’ll predict success.

I recall one of my first lessons in grad school, “cash flow is king.” I think that a lot of people feel the same about how they manage their home finances. Though there is only a $20 annual net savings, I think that the $14.99 per month fee will significantly lower the barrier to adoption for many Prime members. I think that this pricing move, and the recently announced push for both AmazonFresh pickup locations and perishables-focused convenience stores will position them to continue to grow their online grocery business and grow share.

Though the online grocery industry is relatively small at $33 billion as compared to the grocery industry as a whole at $795 billion, Amazon currently represents 26 percent of the online share with $8.7 billion in revenue. Convenience and competitive pricing will continue to reign … save me time, save me money.

The upfront $299 Prime Fresh membership fee was unprecedented and a huge hurdle to adoption. It may have been a self-imposed constraint to help Amazon sort through its assortment, price positioning and local logistics before stepping on the gas.

Along with integrating Fresh into the core site experience, it’s clear that Amazon is raising Fresh’s profile. With competitors like FreshDirect, Instacart, Walmart, Kroger and others expanding too, Amazon definitely needed to do something to make its offering more appealing and accessible to mainstream households.

Grocery is a complex business. Retailers who “grew up” in other retail verticals have to go through a learning curve. For example, Target’s original leadership team came from the department store industry — where changing up your merchandise and rearranging your store for a more interesting discovery/browsing experience was a key success factor. When they expanded their stores to include grocery, they found that approach was not appreciated by the grocery shopper who expects their favorite brands to always be on the shelf, in the same place, all the time. Amazon has a similar growth curve, no matter how many experienced grocery executives they hire — because grocery is new to online. As such, a drop in the monthly fee (even lower than $14.99 in my opinion) is advisable not only as a means to drive adoption, but as an investment in accelerating that learning curve.

The original $299 annual fee was as much Amazon’s attempt to assess the level of interest in perishables as it was a discovery of the value their customers place on convenience in this segment. The high entry point also served to limit the immediate adoption so Amazon could take a small step approach to working out the kinks. That was then, this is now.

Changing to a monthly add-on fee for Prime members effectively removes the original hurdle and signals the company’s doubling down to unleash and scale AmazonFresh. Prime members that choose the easier-to-chew monthly fee will want to make their $14.99 work hard for them and will shift more of their fresh food purchases to the new service.

As long as AmazonFresh executes on the promise and provides order accuracy, freshness, on-time delivers, etc., it will do well with this group. Faltering here, however, may backfire and taint the brand beyond the Fresh footprint.

Charging $14.99 per month will only upset customers on a more frequent basis. If someone pays $300 per year, they expect to save that and more in product cost savings. If they find the process a pain or don’t use the process sufficient to save the amount, they will simply stop using it. Only those without transportation alternatives will continue to pay.

Charging for delivery is an effort to train the customer to pay more. This will fall by the wayside when a competitor offers free shipping. I expect this monthly fee provides for quicker discontinuation of services.

We have a consumer marketplace in which the average household makes 90+ trips to shop for groceries each year. Grocery stores and mass merchants are within 5 miles of 98%+ of the U.S. population. Admittedly, not everyone relishes or has the time to invest in grocery shopping. However, between the U.S. grocery industry and the American farmer, we have seen 40+ years of productivity that has lead to lower prices of grocery products. Amazon Fresh’s price, at $279 per year, is too steep to entice a scaleable number of new consumers. They are going to have to offer other services or values (unique products or the freshest of the fresh produce). The Millennial will be the first of the adopters. The Prosper Monthly Consumer Survey indicates that 37.1% of adults, 18+ are Prime members. That compares to 46.3% of Millennials. The folks that are going to invest more with Amazon Fresh additions are Millennials with household income of 50k+ — 56.4% are Amazon Prime Members — and 60.0% of married Millennials are Amazon Prime members.… Read more »
0
|
0
-   Share

This will work for Amazon, basically because they are Amazon. The trick comes in trying to turn a profit, and I can guarantee you the customers will pay more than “ad prices” for their fresh product, and for higher income families, it shouldn’t be a problem. I keep seeing comments here on free delivery being the future for groceries. If that is true, either prices will continue to rise to offset this, or profits will be impossible, as the costs will eat up the transaction. I am in no way being skeptical, but as I said a thousand times, in a large dense city, yes it is possible to make money. But in the rural areas and large spread-out suburbs, something has to give, either in delivery fees or built in higher prices. I live eat and breathe this business every day, and labor is a huge factor in the bottom line, so I will be interested to see who makes it, and to what extent the real pricing of the goods will be, as… Read more »
1
|
0
-   Share

Braintrust
"I think that the $14.99 per month fee will significantly lower the barrier to adoption for many Prime members."

"Amazon definitely needed to do something to make its offering more appealing and accessible to mainstream households."

"The high entry point also served to limit the immediate adoption so Amazon could take a small step approach to working out the kinks."