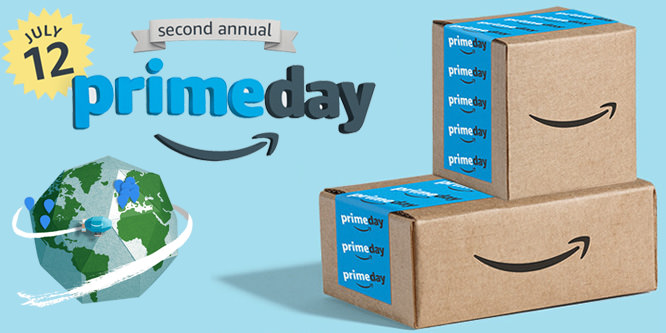 About a year ago, Amazon.com was touting its first annual Prime Day event with the goal of replacing Black Friday as the busiest retail sales day of the year. When all was said and done, Amazon claimed to have broken sales records. So, with little surprise, the e-tail giant is back for year two of the one-day sales event, scheduled for July 12.

This year, Amazon is opening up the promotion for Prime members worldwide. As it did in 2015, Amazon is offering a free 30-day trial membership in its Prime program for other consumers who want to take advantage of the 100,000 deals the company claims to be offering worldwide. Thirty-eight percent of households in America are members of Amazon Prime, Fortune reports, citing the investment bank Cowen as its source.

“Prime Day is a unique opportunity to discover new items and great deals, on top of our already low prices. Following last year’s record sales, we have dramatically increased the inventory behind many deals. In fact, in the U.S. we have nearly double the TV units compared to Black Friday and Cyber Monday combined,” said Greg Greeley, vice president Amazon Prime, in a statement. “Even with this massive selection we know many of the Prime Day offers will sell out, so members should download the Amazon shopping app to receive notifications on their favorite deals.”

In the lead up to Prime Day, Amazon has said it will offer “countdown deals” for its Prime members between July 5 and 11.

DISCUSSION QUESTIONS: Were you surprised by the apparent success of Amazon’s first Prime Day event? Do you expect Prime Day to be successful once again in driving sales and attracting large numbers of people to test Amazon’s annual subscription service with its free 30-day trial offer? How do you see other retailers responding?

Please practice The RetailWire Golden Rule when submitting your comments.
Braintrust
"I fully expect this year's event to be stronger if the content is also stronger."

I don’t know what to say about Prime Day. I, and most everyone I know, thought the offerings were really junky. And I’m not completely sure how the company measured “success.” The sales records it broke were, I think, for a time of year when sales are traditionally very low. So it’s hard for me to get worked up about it.

Still, if the Prime memberships stick, that would be defined as a success by me. But revenue and assortment-wise, I just didn’t see it.

I was not surprised by the success of the first Prime Day, and would not be surprised if sales from this one easily exceed last year. Consumers are looking for bargains. Amazon will deliver (literally and figuratively). With 40+ million Prime members, Amazon continues to lead the way in retailing, either online or brick-and-mortar.

I was pretty set back by how good Prime Day was last year, so I’m personally ready to be amazed again. I feel like Amazon is in this halo zone of doing everything right these past few years. Don’t you? Remember when Gap was in that zone, or Abercrombie & Fitch, or even when Walmart was in a kind of no-lose mode? It seems like every great retailer goes through it.

Historically, retailers level out sooner or later. With Amazon’s model and their dominance of e-commerce, though, seems like we have a long, long way to go before that happens.

I agree with Paula’s assessment of last year’s sale offerings (meh), but it’s clear that Prime Day was a huge success nonetheless. It built awareness of the program, drew traffic to the site, and drove volume not only on the “sale” items but on just about everything else, too. Hard to argue with that kind of success, and I fully expect this year’s event to be stronger if the content is also stronger.

Despite the apparent success of Prime Day last year, I continue to wonder about all the disappointed shoppers who found their desired items out of stock. I don’t recall if Amazon offered what it does today on many out-of-stocks: You place a Prime order (or leave a credit card) and Amazon promises to sell you the item when it’s back in stock (with an email asking if you still want it). To me, placing an order with no information on when or if it might be available is not customer-centric. I’ll be curious about if we see any changes this year in the out-of-stock experience.

When the business model is to make money off the membership, not necessarily the product, sales like this makes perfect sense. How soon will everyday be Prime Day, though?

Will Amazon Prime Day be a success again this year? Is the Thames moist? Amazon will lead the way on July 11, building up fire power from July 5 on. They won’t have an exclusive claim to the day, as other retailers will jump on the party bandwagon — that will drive added consumers to Amazon for a price comparison. July 11 is a Monday — ideal for building up momentum and sales over the weekend. Just as Alibaba, which jumped on Singles Day (11/11) in China, found growing success over the past six years, Amazon will see this occasion be a cash-rich celebration. Offering a free membership to Amazon Prime will provide a solid boost to added sales. Prosper Insights and Analytics Monthly Consumer Survey indicates that three out of 10 adults are now Amazon Prime members. That is just since 2013. The momentum will carry through effectively in July. And other retailers will do well to capitalize on the occasion if they have their operation lined up. Walmart is out in front in… Read more »
3
|
0
-   Share

No surprise here! It’s Amazon. And the staggering fact reported by “Fortune” saying that 38 percent of households in America are Prime members tells me that Amazon’s audience of customers are “primed” and ready for the sale.

As for the free 30 day offer, I can’t see that doing anything other than building their customer base.

Retailers should do what they’ve always done to compete against Amazon, big box stores, etc. Keep offering value and prove why their customers should buy from them.

Sure this will be a success this year, primarily because it is year two and we have had time to become excited about it. Last year we knew nothing and had no expectations. But if we put the pieces together: Amazon + sales + promotion = success.

Amazon did a bit of slight of hand with its reporting on last summer’s Prime Day. Sure there were lots of sales, but the real point was to sign up new Prime members. The payoff was more likely the incremental sales from those Prime members during the following 12 months. At least that is what I’d be tracking if I were their CMO.

So why not repeat the promotion again this year? Prime memberships need renewals. New members are desired. Even selling promoted items at cost can deliver a year-long payback.

This leaves competing retailers with a bit of a conundrum, unless they are also trying to sell memberships. If Christmas in July is just about selling items, that leaves them out of the lifetime value play.

The success of Prime Day is not surprising at all –- it is well known that consumers want a wide array of choices at fair prices, delivered with a high quality of service. Amazon delivers just that and has created trust with its customers. Amazon proves that the Marketplace model (where third-party sellers offer products on a merchant’s site) works. Other retailers are just beginning to embrace the marketplace model now. There are already many in Europe (e.g., Galeries Lafayette, Auchan, Halfords, Carrefour) and the model is taking off in North America (e.g., Best Buy Canada, Walmart). Perhaps a very successful Prime Day in 2016 will force more online merchants to wake up and face the fact that it’s time to offer the broad assortment, fair prices and high quality of service that Amazon already provides or face extinction. Already, 42 percent of online shoppers in the U.S. will use Amazon as their primary holiday shopping destination. There seem to be two schools of thought in the retail world: those that believe we live in… Read more »
5
|
0
-   Share

Not surprised. Yes, this year will be bigger than last year. I think other retailers will respond, not simply for competitive reasons but also to enhance sales during the dog days of summer.

I believe Amazon was a lot more positive about Prime day last year than the Prime customers who were underwhelmed by the odd offering of products.

More interesting to me is the idea that Amazon can now invent its own holidays and drive significant sales as a result, all in the name of the customer experience. No wonder competitors are falling further behind.

Braintrust
"I fully expect this year's event to be stronger if the content is also stronger."