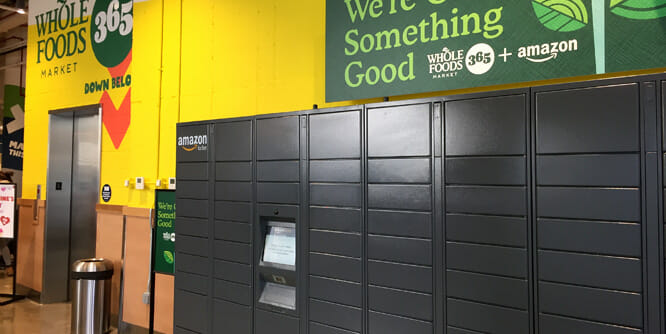 Changes keep coming at Whole Foods since its acquisition by Amazon.com. One fairly small change, the addition of Amazon lockers at Whole Foods’ stores, seems to be having an impact on how people shop there.

Three-to-five minute-long “micro visits” have increased by 11 percent at Whole Foods stores that are outfitted with Amazon lockers, according to a study by inMarket, reported on by CNBC. The study looked at 98 stores in 10 markets with 76 having lockers. Stores without lockers in the same city experienced micro visit gains of only seven percent. Micro visits make up nine percent of total visits to grocery stores, but Whole Foods is still below that average at 6.5 percent for the year so far.

Experts in the article noted that such trips could lead to impulse purchases, but there was no data on how many of the short trips to use lockers also yielded in-store purchases at Whole Foods.

Recent reports have indicated that Amazon may be making other moves that would situate Whole Foods as a destination for customers to do non-grocery business with the e-tailer. Earlier in March, news broke that Amazon is seeking to build a service at Whole Foods that will allow customers to pick up goods ordered online from “a set of marquee third-party retailers.”

Amazon has rolled out other programs since the acquisition which have tightened the bonds between its shopping ecosystem and that of the organic grocery chain.

In February, it was announced that Amazon Rewards Visa cardholders who are Amazon Prime members would earn five percent cash back on purchases at Whole Foods. Amazon also rolled out one- and two-hour grocery delivery from Whole Foods for Prime Now customers in some markets.

DISCUSSION QUESTIONS: Is an increase in micro visits for customers using Amazon lockers a phenomenon that Amazon/Whole Foods will benefit from? Should other companies consider Amazon locker partnerships to encourage similar visits? Is Amazon overdoing the encouragement of non-grocery-related services at Whole Foods?

Please practice The RetailWire Golden Rule when submitting your comments.
Braintrust
"My sense is that the micro visit is not necessarily the end game for Whole Foods. I think they’re testing the pickup hub strategy."

"Rather than using Amazon’s lockers, retailers need their own in-store pickup. Otherwise, all the impulse buying will go to Amazon/Whole Foods..."

"Amazon will keep iterating Whole Foods until they get the balance right between lockers and shoppers. "

18 Comments on "Are Amazon lockers turning Whole Foods into a quick shop destination?"

Most grocery stores know that the longer a shopper lingers, the greater the chance that they will spend. That’s why so many stores added Starbucks — the longer customers were in the store, the more basket size and margin rose. The more Whole Foods becomes like 7-Eleven, the more cause for worry. With the exodus happening of executives I do not see more short trips as a positive — just the opposite.

If I were a shopping mall, (strip mall or full shopping mall) I’d want to partner with Amazon and any other retailer that has lockers. Driving traffic to a physical location is key to the purchase. (if they’re not there … They can’t buy!)

It comes down to the size of the package. Generally speaking, the lockers are pretty small so that bodes well for picking up a few other items while there. What happens when it is a larger item, and one that does not fit in the locker? Will Amazon/Whole Foods allow you to pick up these larger items which will need to be stored outside the locker and risk having the store look messy? I see a huge difference in store layout and shopability when shopping at a Whole Foods in the city versus one in the suburbs.

The challenge will be, how big is the box?

With Amazon also dabbling into shipping, maybe Whole Foods/Shipping Service is the next logical step and in that case they can handle pickup items bigger than what a locker would hold.

Any increase in foot traffic is always welcomed by retailers. Whole Foods is no exception. However, converting micro-visit locker traffic to food shoppers may not be as easy as it sounds. That traffic came to Whole Foods for a very specific reason: to get their Amazon purchases and not to grocery shop.

The short time they are in the store is indicative of their single-mindedness of purpose. I would expect the conversion ratio to remain small based on the assumption that much of this traffic had not already been Whole Foods shoppers.

Any time you can get a customer to come into your store, even if for a short time, is an advantage to the store. And when you can do it with frequency, all the better. When a customer gets used to having regular visits to store, even if to pick up an item from the Amazon locker, it is an opportunity for a sale. The pickup of items in a locker is an extension of the customer’s lifestyle, just like shopping at a grocery store. Put the two of them together and there is some definite symmetry.

Amazon is doing everything possible to drive consumers into its Whole Foods stores. While the word “Food” may be in Whole Foods, look for the stores to become Amazon hubs. Bezos bought the company for many reasons besides selling overpriced groceries.

Locker partnerships help Amazon and other online players to create real efficiencies relative to the final-mile expenses. However the real potential winners are those retailers who develop an effective locker program that is integrated into the retailer’s merchandising strategy. A locker location in proximity to impulse items or grab-and-go meals could be a game-changer. Lockers have the potential to bring customers into the store who would not necessarily make the trip. The challenge now is to convert them to incremental business customers.

If we have learned anything about Amazon, it is that they defy description and labels. Amazon is the master of building an ecosystem. They never do anything without testing it, and they continue to iterate based upon the data. Amazon does NOT want to build traditional grocery stores or convenience stores.

Amazon will keep iterating Whole Foods until they get the balance right between lockers and shoppers. And they will do the whole process again when they acquire the next stores. If the next stores are some of Toys “R” Us locations, they will not be toy stores. The new stores will be morphed into locations that can improve overall speed and reduce inventory costs.

If these short trips are in addition to existing customer traffic, then they are positive. However, the trick is to get people to buy other things while they are in-store. Given Whole Foods’ tempting range, that should be possible. The question now is, is Whole Foods optimizing its in-store experience to drive sales and conversion?

Definitely — micro visits are a good thing. Even if they are not an instant hit with additional impulse purchases, over time two things happen. First, as shoppers become used to micro visits they will ultimately end up buying more goods “since they are there anyway.” In effect, with time impulse buy and loyalty buys will increase. Second is the sheer fact that this drives more in-store traffic. More in-store traffic means you increase the odds in your favor, increasing your sales (be it impulse buys, or remembered items, or that it is more convenient to buy here rather than going for the lowest-cost item across town).

Rather than using Amazon’s lockers, retailers need to create their own in-store pickup. Otherwise, all the impulse buying will go to Amazon/Whole Foods instead of your own retail store. That is a waste. Going this way effectively funds your competitors. Retailers beware.

Since Amazon has lockers in 7-Eleven convenience stores in 300 cities, the data set about what items are picked up there by what type of customers, compared to items in Whole Foods where the parking is less convenient, should be valuable for charting the future for all three brands.

I find it interesting that the study did not indicate how many of the short trips resulted in in-store purchases. Bringing traffic into a store is a good thing and that part appears to be working but where is the lift to Amazon? Are Amazon sales increasing due to the lockers? Amazon can certainly benefit from this move and it will be interesting to see which way they go. For my 2 cents.

My sense is that the micro visit is not necessarily the end game for Whole Foods. I think they’re testing the pickup hub strategy … and will be able to expand the size of lockers as the consumer gets acclimated to the idea of retail hubs for Amazon purchase pickups.

No, Amazon lockers are not turning Whole Foods into a “quick shop” destination, or anything else other than a more convenient retail chain to do business with. Shoppers will continue to walk through the stores when they have time and fill up their shopping carts with unplanned purchases and, in fact, they will also do so online, perhaps even more-so. Keep in mind that Amazon has elite expertise with increasing the size and variety of purchase, online.

Yes, Amazon/Whole Foods and every other retailer will benefit from micro lockers (even if those micro lockers simply store first-party products).

The elephant in the room is that postal services are already at capacity and a dynamic pricing model is a very real possibility in the supply-and-demand of “same day delivery” services. Under these conditions, “Buy Online, Pickup in Store” and curb-side delivery will become an essential part of every retail business — independent of impulse purchases or not.

I can picture shoppers coming to pick up an Amazon purchase after work (quick stop) and deciding at that moment to run in and buy some prepared foods for dinner from Whole Foods. I’m sure scenarios like this were played out in meeting rooms at Amazon when they decided to install lockers. There is definitely potential for upside here, but the question is will these micro visits detract from longer visits to Whole Foods where shoppers might checkout with larger basket sizes.

Amazon lockers are a definitely a draw to attract spillover and micro traffic into Whole Foods stores. Retailers need to do everything they can to drive store traffic. When consumers are picking up their items from the locker, it is convenient for them to pop into the Whole Foods and pick up a few items that are on their shopping list or select from a wide variety of prepared or made to order foods. Since many Amazon members may not be typical Whole Foods customers, it is a great way to introduce a broader audience to the brand. This strategy is likely to introduce Amazon shoppers who aren’t already existing customer to embrace the healthy alternatives they have curated and benefit from impulse and convenience purchase. This strategy will likely be embrace by other retailers to extend their brand to new demographics. It will be interesting to see what Whole Foods stores look like in a couple of years. For example, will they carve out a section in the front of the store to become… Read more »
1
|
0
-   Share

Braintrust
"My sense is that the micro visit is not necessarily the end game for Whole Foods. I think they’re testing the pickup hub strategy."

"Rather than using Amazon’s lockers, retailers need their own in-store pickup. Otherwise, all the impulse buying will go to Amazon/Whole Foods..."

"Amazon will keep iterating Whole Foods until they get the balance right between lockers and shoppers. "