Are bike lanes good for retail? 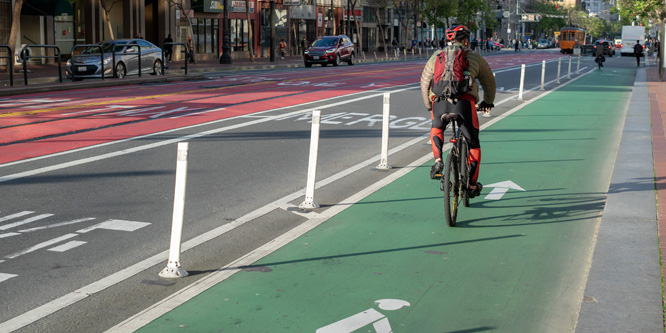 Retailers in Miami, San Diego and Cambridge, MA, have joined those in other cities in recent years complaining about the addition of protected bike lanes, although studies show they eventually drive shopper traffic.

The bike lanes are designed to make it safer for cyclists and scooters to get around and are generally pitched as positive socially, environmentally and business-wise for communities.

“Studies show that complete streets equipped with features that make travel safer for pedestrians and bike riders are good for business, public safety and quality of life,” Dave Rolland, deputy director of communications in the office of San Diego Mayor Todd Gloria recently told the San Diego Union-Tribune. “The mayor is also committed to meeting the ambitious goals in the city’s climate action plan for reducing greenhouse gas emissions, and decreasing car trips and increasing bike trips is a major part of hitting those goals.”

Bike lanes have been found to boost local sales across San Francisco, Los Angeles, Minneapolis and other U.S. cities with several studies confirming their impact.

In a Bloomberg article, David Zipper, a visiting fellow at the Harvard Kennedy School of Government, said he has found local business owners often underestimate the share of their customers who arrive by walking, biking or using mass transit because they drive everywhere. Similar complaints are often heard around converting parking spaces to outdoor eating or walking spaces.

Nonetheless, articles about local business owners protesting the loss of walk-in traffic often follow the arrival of bike lanes. In Massachusetts, a group of Cambridge businesses are suing the city over the changes.

Lee Jenkins, owner of Cambridge’s Violette Bakery, told Cambridge Day, “We believe improved bike lane access to be an excellent goal, but not when the parking for business customers and staff, as well as for neighborhood residents and patients of local medical providers is being completely gutted.”

Store owners also often claim the loss of parking spots makes it hard for delivery trucks to drop off orders without causing traffic jams. In many cases, residents, the elderly and disabled advocates also complain about losing parking spots.

DISCUSSION QUESTIONS: How confident are you that bike lanes elevate retail traffic for local communities even when they replace parking spots? What further steps could municipalities or stores themselves take to rely less on parking spaces outside their front doors?

Please practice The RetailWire Golden Rule when submitting your comments.
Braintrust
"If we are going to satisfy the diversity of shoppers, we need to make room for walkers and cyclists as well. "

8 Comments on "Are bike lanes good for retail?"

Municipalities need to invest in parking. Like it or not, people in America love their cars. But if we are going to satisfy the diversity of shoppers, we need to make room for walkers and cyclists as well. I think smart local retailers should consider adding a bike rack outside their shop and consider attending city hall meetings to better understand shoppers with bikes. Parking meters might be a bargaining chip here somewhere. And if we ever get ahead of the next COVID-19 variant long enough to have the “do we still want these outside restaurants in the road,” then this debate about bike lanes will get really interesting. Regarding delivery parking, local ordinances will need to make allowances for that, right?

Bike lanes are a great way to improve the quality of life in cities, but I doubt it significantly impacts retail business positively or negatively. While convenient parking is appreciated by shoppers, losing a few parking spots to accommodate bike lanes probably won’t deter customers from visiting stores. If retailers are providing great products and services, customers will be loyal.

The rise in bike ridership is a good thing, so retailer groups should work with their municipalities to find the best solution for all involved. Blocking the adoption of bike lanes is a mistake, in my opinion. In NYC, from what I can see, it’s rare that new bike lanes displace parking spots. But so much depends on the width of the street and sidewalk — the city needs enough space to work with. On wider avenues, the best solution I’ve seen is to sandwich the bike lane between the curb and a row of parked cars. It offers riders the best protection from traffic (although you have to keep an eye out for folks opening their car doors as you pass). This configuration is far from ideal, though. If the retailer has a parking lot, customers leaving via the driveway have to inch out through the bike lane and row of parked cars to see oncoming traffic. But you work with what you’ve got. Ideally, cities and suburbs will some day have fewer cars… Read more »
7
|
0
-   Share

I live in Manhattan and haven’t owned a car in more than 20 years. Between buses, taxis, subways, and my own two legs, there is not a store I can’t reach in the entire city.

I can’t speak to the numbers for other cities, but in NYC over 530,000 cycling trips are made each day. Now put those folks in cars and find a place to park. If retailers in NYC are complaining, they are grossly mistaking the reality.

I understand the complaints all around, but here in South Florida there is a huge need for bike lanes. Drivers were speeding and out of control before the pandemic and it’s now a lot worse. There are regular stories about bike riders being hit and often killed by speeding cars. Bike lanes are the least we can do.

Here in downtown San Diego bikers, walkers, scooters and skateboarders have to share the road with cars, car services, buses and trolleys. Not everyone can afford or wants to own a car, so municipalities have to come up with new ways to (safely) accommodate new modes of ground transportation, especially in city centers as well as shopping/dining districts.

Pre-pandemic, I was in Vienna, taking in the scene. Sitting with my beer, I noticed the traffic. Cars, buses, trucks, and trams — all were converging into a “Y.” It was so smooth. Like everyone knew precisely what to do as if it was a well-choreographed ballet. Maybe we will get there here in NYC.

Any sound study will emphasize the necessity of ample parking on retail viability, bike lanes themselves don’t add capacity but should be accommodated as another alternative transportation mode, albeit still significantly smaller than car traffic in the greater US.

Braintrust
"If we are going to satisfy the diversity of shoppers, we need to make room for walkers and cyclists as well. "