Are hearables the tipping-point wearable device? 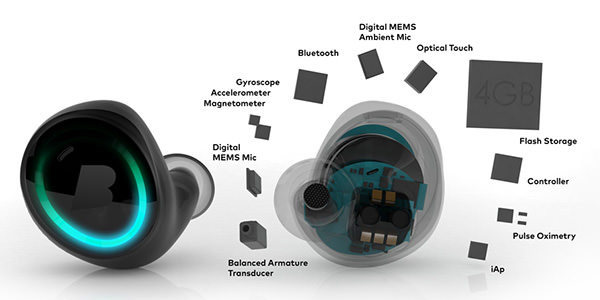 Through a special arrangement, what follows is an excerpt of an article from Retail Dive, an e-newsletter and website providing a 60-second bird’s eye view of the latest retail news and trends.

Wearable technologies such as Apple Watch, Google Glass and fitness trackers are already collecting information that ultimately may be used to make the wearers’ lives easier. But "hearables" — delivering audio cues to users and accepting voice-activated commands — are set to have a huge impact on the Internet of Things (IoT), likely delivering all sorts of new capabilities, even voice-activated shopping, to consumers.

Hearable technologies are projected to rack up $5 billion in sales by 2018, according UK-based Wifore Consulting, or about the same amount as the entire wearables market will take in this year. Why? They tend to be more discreet than other wearable interfaces, and people are already accustomed to in-ear technologies.

"Earbuds are the only piece of wearable tech to have gained ubiquity and social acceptance," Nick Hunn, founder and CTO of Wifore Consulting, said in a report cited by CNBC. "These devices are about to undergo a revolution in capability, getting rid of their cables and giving them the opportunity to be the standard-bearer for wearable technology."

German manufacturer Bragi offers a wireless headphone that not only plays music to accompany one’s workouts, but measures heart rate, blood pressure and respiration to offer computer-generated, audio feedback. Stateside, Intel is developing a similar health-monitoring headphone device with rapper 50 Cent. Apple is rumoured to be working on a hearable device following its acquisition of Beats.

The real potential for hearables lies in their ability to function as a listening device. Similar to Apple’s Siri and Microsoft’s Cortana, most hearables will accept spoken commands — and that means they can be used to perform any number of IoT functions, from turning off the lights to ordering groceries.

Microphones are the "stealth technology" set to enable widespread acceptance of the IoT, said James McQuivey, principal analyst at Forrester Research, in his keynote speech at IRCE in June.

Pointing to voice-activated systems such as the Amazon Echo and the microphone-enabled remote controls issued by Google TV, he posited a home setting in which commands voiced aloud would assist with shopping: "At any moment you could say, ‘(Insert name of retail relationship here), send me toothpaste.’"

Equipped with two-way, in-ear hearable devices, people could soon be able to perform practically any shopping function — from finding a store, to ordering an item, to making a payment — from any location within the range of one’s voice.

Will the arrival of hearables be a bigger game changer for retail than wearables? Are hearables platforms coming from Amazon, Apple, Google or other technology vendors more of a threat or opportunity for traditional retailers?

Please practice The RetailWire Golden Rule when submitting your comments.
Braintrust
"Hearables are a stepping stone to Ambient Computing (the environment is the device) and when that is pervasive, the floodgates will be open. The issue for retailers isn’t any particular technology, it’s what they do with it."

11 Comments on "Are hearables the tipping-point wearable device?"

Hearables are an important new development for wearable technology. Today’s current devices are not sophisticated enough to attract true athletes. Most current unsophisticated devices are primarily for users who want to lose weight. NPD data shows trackers have a 40 percent abandonment rate in the first six months, a stat that mirrors the abandonment rate of health club memberships.

When devices help true athletes to improve in in their sport, the wearables business will go to an entirely different level.

Isn’t a “hearable” also a “wearable?” Doesn’t that make it a wearable that can hear?

Amusement at our tendency to create jargon aside, I do think the real breakthrough here is still voice recognition. That is the technology that makes interaction with digital devices easier. Now we are installing that very useful real benefit in smaller devices with attachable ways to carry them around. Good innovation. Not really surprising or earth shattering.

To the point of how it will change retail, the bigger question is how will retail capitalize on this new vehicle for asking a particular retailer to give me a product, with a better way to give me the product in return. Will customer service communicate back with me by voice instantaneously to confirm, clarify or suggest substitutes for out-of-stocks? Will the voice in my ear upsell me or suggest complementary purchases?

Lots of opportunity here, and lots of work to do.

This technology will indeed have a significant impact on brand, retailer and shopper communication. The same rules of engagement need to apply with respect to privacy and opt in matters, but audio can be a powerful medium to reach shoppers given the ubiquitous acceptance and use of headphones.

Imagine the impact of the voice of James Earl Jones inviting you shop for the new Star Wars stuff in aisle 16! It could be a terrific way to reach the young audience. Augment this by being able to download or view an exclusive trailer on your mobile device and you have an amazing continuity of experiences.

I expect that hearables would be less distracting, both as speakers and microphones. If coupled with health monitors, they can become discreet and minimalized. I think it could be a great breakthrough for shopping AND customer service. Is the next step being able to read another person’s unspoken thoughts?

Hearables are a stepping stone to Ambient Computing (the environment is the device) and when that is pervasive, the floodgates will be open.

The issue for retailers isn’t any particular technology, it’s what they do with it. Target is rolling out a trial on beacons right now and this “new” technology apparently is being used for “offers” AKA couponing, which is the same-old same-old. When retailers can see beyond yet another technology to offer discounts or doing nothing more than the competition is doing with technology, then and only then will these capabilities offer them any substantial benefit.

Amazon Echo (a thinly disguised ordering convenience device) is a step in that direction, but having to possess three or four competing devices/apps from different retailers is not going to fly with consumers.

OMG. “Hey [insert retailer here] send me toothpaste!” Are we serious? I’m sorry but my response is “Get off your fat [insert body part here] and come get your own #%&*@ toothpaste!” Hearables will be the tipping-point alright. The question is in what direction? I keep thinking that most weedkiller is simply too much fertilizer. Similarly, the unrelenting invasive noise of ads has led to the rise of ad blockers. In that context the tipping-point was reached but it’s tipping toward destroying itself. When we push technology too far just because we can, we run the risk that it will actually destroy what it purports to help. Already our kids are losing any relationship skills they may have had. They don’t even have to hang out at the mall any more (where they at least had to walk around and talk to each other) because the mall comes to them. On a personal note I just want to apologize to my daughter for all the times I told her to stop hanging out at the… Read more »
0
|
0
-   Share

I believe the “hearable” is a wearable. Another technology that is taking us into the future, which includes Star Trek, Star Wars and many other movies that have the word Star in them. The Apple Watch brings Dick Tracy into reality. Hearables could be the next step. I look forward to seeing how this works, and how retailers are going to take advantage of it.

Wearables replace carry-ables (?) for convenience. Hearables will replace wearables for convenience. Consider how dedicated we are to our devices. How many of us panic if we walk out of the house without our phone or if the battery runs out and we can’t recharge? Our devices are an inextricable part of our lives and anything that connects them closer and more conveniently will eventually be adopted.

Keyboards and screens are quickly becoming more and more an unnecessary appendage commonly referred to as the old folks’ way. Voice recognition and command software combined with faster communications in the wireless industry will soon push aside the smartphone and tablets we have come to know, love and need.

The demand for new and fast is a core condition of the IT market that has no sign of slowing. The failures of the companies mentioned in this discussion to successfully provide viable and likable solutions to the market is not the market’s rejection of the technologies, it is a rejection of the company’s offering(s). It is mistakes like these that made companies like Apple, Microsoft and Google possible and it is mistakes like these that have made thousands of IT companies go away or shrink to insignificance in just these past 50 years.

It’s one more category to capitalize on. Game changer? To be determined. Faster adoption than wearables beyond a wrist device? Most likely, since hearables are already penetrating the global market significantly. Big opportunity for merchants of all types, potentially.

Even though the idea of hearables has much appeal, there is still the need for the processor to be nearby. (Hence the need for the wearable.) Yes, you can load a few applications into an ear bud and have it be a standalone, but I don’t think the technology is ready, nor are batteries small enough for us to conduct our lives exclusively through a hearable only.

But sure, voice recognition is what it’s all about. If only they could learn how to interpret southern. (Siri doesn’t understand much of what I say.) With voice recognition, the IoT, the cloud and a processor either attached to me, my car, etc., my lifestyle will be enhanced.

Just don’t make me have to have a different hearable for every application I want to use (hence the need for some kind of processor). I might be able to talk to the cloud, but something has to be there to direct my message to the right place. Just sayin’.

Braintrust
"Hearables are a stepping stone to Ambient Computing (the environment is the device) and when that is pervasive, the floodgates will be open. The issue for retailers isn’t any particular technology, it’s what they do with it."