Are NanoStores the new ultra-convenience stores? 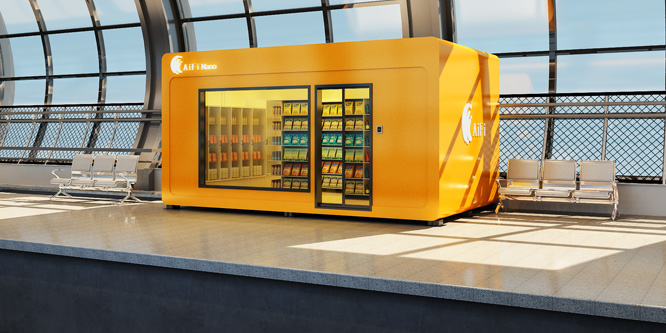 With shoppers desiring ever-more convenience, all sorts of new self-service shopping models were on display at the recent NRF Show in New York, including the “NanoStore.”

For those not familiar, the NanoStore, created by AiFi, a developer of store automation systems, is touted for being an ultra-convenience store. About the size of a parking spot, each unit is a completely automated convenience store that can be dropped in the parking lot of a shopping mall, office complex, college campus or virtually anywhere there is space, including indoors. It is a bit of a cross between a convenience store and a vending machine.

Shoppers enter the store by inserting their credit card and/or other ID to unlock the door. Once inside, shoppers simply browse the items on display in a single aisle format, grab them and go. If they choose, they can “check out,” although there really is no need as every item is tracked via cameras with imbedded object algorithms, sensors, etc. and a receipt is immediately e-mailed to the shopper.

While there is no human supervision at the store, the idea is for a retailer to roll these out in groups of 10 or 20, which can be replenished and supervised by the retailer. Merchants can also get real-time analytics on what’s happening in these stores, adjust items carried accordingly and analyze how shoppers behave.

Currently, NanoStores are in test. Zabka, a Polish chain with 5,400 locations throughout the country, announced plans to launch a similar format using AiFi technology at NRF earlier this month. In terms of ROI, AiFi claims payback on the units is approximately one year.

Please practice The RetailWire Golden Rule when submitting your comments.
Braintrust
"The real question is, what is the purpose and value of a physical presence? Answers to that question vary greatly, and are sincerely in flux."

"We are seeing a lot of pretty fancy vending machines and I would almost think expanding that concept a better investment."

"This idea is (pardon the pun) popping up more and more."

18 Comments on "Are NanoStores the new ultra-convenience stores?"

I don’t mean to be Mr. Negative here, but I do not see this as a big win. Sure there is a bit of a novelty to visit one for the experience maybe, but we are already inundated with an abundance of convenience stores all trying to outdo one another. Amazon Go has not yet proven to be a big win and it has more to offer than the NanoStores. There are way too many unproven concepts out there, and many retailers are falling for the trap in investing in technology and concepts before they have substantial evidence of a strong ROI. I see NanoStores as just that. Despite all the distorted statistics that claim the consumers do not want to be bothered by associates, the truth is the stores with the best human interaction have been and will continue to be the big winners. All customers want is convenience and to be able to get in and out quickly when they know what they want and service when they need assistance.

I’m just going to add to Mr Negative here. I do like the concept, however, the tech involved is pretty costly along with the maintenance. We are seeing a lot of pretty fancy vending machines and I would almost think expanding that concept a better investment. It is all about reaching and providing convenience to the customer but hey, let’s try to make some money doing it. And that’s my 2 cents.

Definitely. This brings convenience to the inner city. Specifically with a rise of more people moving to the city cores, having these small services is an excellent move. Online shopping and delivery is great, but this is about immediate buying.

I can see a mix in these NanoStores. It is always interesting to have new unique items… but there are staples like chips, gum, water and soft drinks that are always good to pick up as an impulse buy.

Another store that is already working like this that is being trialed in Canada (blends this concept with retail pickup in the inner city), is Penguin Pickup Stores. This is a cool new dimension to retail and the omnichannel future.

The real question is, what is the purpose and value of a physical presence? Answers to that question vary greatly, and are sincerely in flux as convenience becomes less and less of a factor. As for these NanoStore concepts, I see them as convenient and potentially solving a lot of problems that plague convenience stores such as high employee turnover and theft/slippage. Outside of that use case, and outside of airports (where needs are slightly different), I am not sure I see the value of them.

Part of making shopping convenient is being where the shopper is. This ain’t rocket science. Vending machines have been around for longer than we’ve been alive. Making them bigger to accommodate a larger variety of products has been done before. Making them even bigger so people can shop inside is the next evolution. Kind of like the intersection of the iPad Mini and the iPhone. LOL

It is a logical step. And shoppers are going to need a little bit of education on how to engage with the NanoStore. It’s a very smooth and sleek experience that might need to be staffed in the early days to help consumers learn how it all works (similar to how Amazon Go stores have someone standing upfront as you walk in). Soon enough though, I’m with Ralph that this format will become second nature to many.

Right on Ralph and Sterling! NanoStore is a packaged/next-gen version of a vending machine and pop-up store. Success will be based on convenience and assortment, like all retail.

This concept is more suited to being an over-sized vending machine in an office building than trying to replace today c-stores. The size limits the product selection and thus the appeal.

I do agree with Susan that they may also find a home in airports but then again there are the ubiquitous newsstands that carry a broader selection than the NanoStores and offer a variety of payment methods.

Wherever hunger and convenience collide there is a profit opportunity. The vending machine business taught us this years ago. Traditional c-stores learned from the vending business as well. This hybrid vending machine/c-store fills a current void noted in the article. In addition, if the the NanoStore fits in a parking lot, instead of dropping them into the parking lots of shopping malls, office complexes and college campuses, why not make them totally mobile (a trailer with wheels) and roll them into sporting events, community events, etc. as the events dictate?

I think this approach has tremendous potential in the U.S. where a convenience store won’t make it but this kind of limited shopping might.

It reminds me of the small stores at many hotels. And how many buildings have tiny convenience stores. And that many more places would find profit from offering shopping opportunities.

To grasp the opportunity, though, we shouldn’t consider these “convenience stores” but a more elaborate type of vending machine. In that role, I think they can do quite well.

There will be a place in the retail landscape for this type of format and offering. I don’t see NanoStores replacing convenience stores, but certainly complementing them. I view the keys to success to be:

On the investment side, I see “in-store” technology and connectivity requirements as two important capital requirements. Potential vandalism is also a concern.

The NanoStore is a vending machine on steroids. While I find all of the flurry of grab and go convenience store innovations interesting, it is hard to imagine that they will be profitable. The technology will be very expensive and the payback period will likely be very long. It is exciting to think about the future of convenience stores, but it is likely to be a slow evolution, IMHO.

This idea is (pardon the pun) popping up more and more. Last week while traveling I noticed large scale vending machines for CVS and Best Buy at multiple airports. The key for these offerings is that they must be within high volume locations and offer relevant merchandise for the surrounding area. If this is just another convenience store…or similar to those (moderately creepy) mini convenience stores at hotels (where no one is really sure what to do)…success will be difficult.

Just like small kiosks that run through the middle of malls, the “NanoStore” is a concept that has merit. There are other concepts that are similar. Some are even mobile stores that are equipped with driverless technology. Just read the first five words of this article: With shoppers desiring ever-more convenience… Convenience is the next level of customer experience. So give the customers what they want!

The description makes it sound like the “store” can only handle one customer at a time, which would seem to be a serious limitation. But whatever the specifics of the operation, it still has to face the same issues traditional stores do: convenience (number of locations) vs. having sufficient inventory to be useful (this looks rather small) having to be replenished. And it introduces new issues: what happens when the card reader breaks or someone superglues the door and there’s no one there to deal with it?

I’ll await the results … but with some caution.

I believe there is a hybrid concept that combines the NanoStore within an experiential “theatrical” retail environment — a variation of the “store-in-store” concept. Shoppers would be engaged in experiences, and purchases could be facilitated through a NanoStore. The NanoStore is an expanded BBY Express kiosk. Bringing these two concepts into a single environment could be very successful.

Variation on the shipping container stores used all over the world. In Dubai there is an entire mall constructed with the same containers. The other version is the palletized display systems developed by the co-packers that can be moved by fork lifts. Some Mexican grocery store chains have whole sections of the store assembled with a fork lift.

Braintrust
"The real question is, what is the purpose and value of a physical presence? Answers to that question vary greatly, and are sincerely in flux."

"We are seeing a lot of pretty fancy vending machines and I would almost think expanding that concept a better investment."

"This idea is (pardon the pun) popping up more and more."