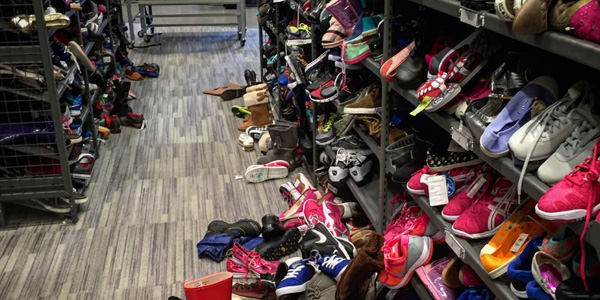 One less talked about advantage of online shopping is avoiding the grime, odors, sloppiness and other forms of annoyance that often occur at physical retail.

A survey of 2,082 U.S. adults commissioned by Cintas Corp., the provider or work uniforms as well as cleaning and safety solutions, found that 78 percent of shoppers would not return to a store due to general bad odor, becoming the leading reason shoppers would avoid a store due to a facility issue.

The remaining top five reasons were:

The problems cited in the survey seemed to be more the result of a lack of investment or commitment to maintenance than understaffing. The most-common associate-driven issue appears to be general untidiness and is often linked to sellers of apparel and footwear, such as department stores.

The New York Post last week blamed a drastic cut in associate hours since mid-April by J.C. Penney to shore up first-quarter results for widespread untidiness at the chain in the latter part of that month. An employee told the Post, “If you walked into a J.C. Penney store during those two weeks, you would have seen clothes on the floor and fitting rooms in disarray.”

DISCUSSION QUESTIONS:
Are subpar store conditions driving customers to prefer shopping online? What are the most persistently, annoying in-store condition issues and have any become worse?

Please practice The RetailWire Golden Rule when submitting your comments.
Braintrust
"While I’ll agree stores can be unkempt, it is quite a reach to say customers aren’t shopping due to that. The reason shoppers aren’t returning is because shopping isn’t considered fun."

"The most damaging in-store annoyance isn’t listed here: subpar staffing. There’s nothing more annoying than to come to a grocery store the day before Thanksgiving and find that two of the nine lanes are open. Really?"

"My grandfather, a ShopRite Supermarket operator and Wakefern member for many years, was fanatical about cleanliness. He was especially focused on the condition of the floor as the shopper entered the store."

While I’ll agree stores can be unkempt, it is quite a reach to say customers aren’t shopping due to that. Since Cintas provides a lot of the cleaning supplies, a skeptical eye is best used at this survey.

That said, the reason shoppers aren’t returning is because shopping isn’t considered fun; it’s work, as I explored in yesterday’s post How the Cubs’ Zany Suits Show How To Fix Brick and Mortar Retail Sales.

Just like baseball, when the team is none for all and all for none, the experience in the store isn’t worth putting down the pad and driving to the store again.

Restaurants should be fanatical about cleanliness, from the doorway to the tables, from employees to the restrooms. Retailers selling clothing should be concerned about how employees look, odors and overall cleanliness. It just makes sense to present a clean, fresh look and smell to consumers.

The most damaging in-store annoyance isn’t listed here: subpar staffing. There’s nothing more annoying than to come to a grocery store the day before Thanksgiving and find that two of the nine lanes are open. Really?

Anything that causes friction between the ideal sales experience and the customer will cost sales, degrade the brand and drive customers elsewhere. The stakes have never been higher.

You never get a second chance to make a first impression in a physical space. Stores by definition are a “showcase” featuring displays. If the glass is cracked or dirty, the immediate impression is that the store does not care.

Store condition is absolutely necessary, but not sufficient to keep customers coming back. Pristine stores who do not offer customer service and personalized experience are also rapidly losing customers to online.

Subpar store conditions are the black eye that starts the customer migration to online. Add lack of staff, out-of-stocks, long lines at checkout and the consumer value equation of where to shop quickly tips toward online.

Store conditions have deteriorated over all, but the better store operators are successful because they pay attention to these details. This said, there are several other variables that are sending shoppers away from stores and towards e-commerce, notably price, selection and customer service.

My grandfather, a ShopRite Supermarket operator and Wakefern member for many years, was fanatical about cleanliness. He was especially focused on the condition of the floor as the shopper entered the store. He wanted it to be cleaned and polished all the time, the idea being that a dirty floor reflects badly on the conditions in the store, on the products being sold and on the owners.

The data supports customer dissatisfaction with brick-and-mortar retail. Online will take share in this scenario. Aisle clutter and dirt, dirty conveyors and shopping carts, dirty restrooms, produce askew and poor lighting and shelving all give the impression a food retailer doesn’t care.

About 15 to 20 so years ago I got hired to help with the acquisition analysis of the Jamesway stores on the east coast. One of the things we had to evaluate were the store conditions. We didn’t have time to go through each store, so instead we just went to the men’s room. Whatever condition the men’s room was we used for the entire store because experience told us there is a high correlation between the two. The restroom is always a key indicator and always the most annoying when in poor condition. Most market analysts like me know instinctively to always use the Walmart restroom in the back of the store, not the front.

The ever-growing mess at in-store retail is shameful, especially when associate cuts to shore up a quarterly results statement is part of the issue.

It still stuns me to know that in 2016, retail executives will willingly “walk away” from their shoppers by making these type of decisions. When will retailers wake up and truly behave like they understand the relationship with shoppers is precarious and must be nurtured?

As a long-time advocate for “shopper-first” planning and activation, I see this as an immediate and opportunistic priority for change that matters to the future of in-store shopping.

As a shopper I have already stopped shopping a number of retailers due to the uncleanliness and mess. They’ve lost my online business as well.

I must shop in different stores. To be completely cynical, the phrasing of the questions seems rather self serving and based on a hypothetical question, not that 78 percent of stores are in need of better hygiene. As for my online shopping instead, 78 percent of the time the kitchen hasn’t been completely cleaned up and the living room really could use a good vacuuming and dusting. That’s why I’m browsing Amazon and avoiding household chores.

E-commerce sales are largely driven by price and availability for those items the consumer is familiar with directly or indirectly. Free delivery, or the perception that it is free, expands e-commerce into the realm of reordering for things like laptops and ink cartridges. For these and many other reasons brick-and-mortar retail should be considered and planned as completely separate.

Many will argue that omnichannel development will be hindered by this approach but until there is a universal concept, understanding and plan for omnichannel it may be argued that there is no omnichannel. As for the focus of this discussion the need for cleanliness and customer-friendly accessibility is seemingly falling on deaf ears. This may be due to the lack of experience and education from the top. Owning a financial expertise and making snap decisions based solely on the ability for profit taking is the root of demise for countless corporate failures. Retail of any kind is still retail. The best companies out there are driven by true retailers that understand their market and channel.

The stores left the customer before the customer left the stores. Dirty, understaffed, under-stocked … who would give their hard-earned dollars to a place that doesn’t respect their time and effort?

It would be dismissive not to recognize that subpar store conditions are one of the factors that may cause customers to defect to online shopping. But this is only one of many factors. Getting it right at retail requires orchestration of an array of characteristics: in-stock condition (with the right items); pricing (competitive/realistic); staffing (friendly, informed, trained); hours of operation; convenience/access; experience (this could be a post in and of itself!) and “five sense” experience (lighting, odor, sounds, touch and “taste”).

I have not experienced store conditions of the type and extent described in this article, so I wonder how pervasive it really is. If I did encounter these conditions it would likely greatly influence my desire to avoid said stores in the future.

Stores can be sloppy, but I don’t think that’s what drives the majority of shoppers online. Stores need to be clean and well-maintained (no leaky ceilings, broken fixtures) and if it is a bit messy but the product is there and the price is right, shoppers will come. I think the bigger issue would be store employees and their knowledge and ability to help the shoppers. If shoppers can get help to get the products, they will forgive a little chaos in the store.

I’m willing to wager than just about everyone one of the readers on the mainland has walked out of a McDonald’s at least once without ordering due to unacceptable store conditions, customers, or employees. Thats what the drive thru is for. So you won’t have to see the dirt, filth, the loiterers, or the people preparing the food.

Poor shopping conditions absolutely influence a shopper to go somewhere else, however, I don’t know that it necessarily drives them online. There are a myriad of other factors including staffing, product availability and price that motivate a shift to online.

Funny this is a topic today — I was just in a B mall here in Columbus Ohio and could not help but notice how run down the condition of the stores was. It has long been known that most retailers focused all their investment cash on e-commerce this last decade. But now that any retailer that reads the paper realizes how far behind Amazon they are (AMZN = 60% of all March e-comm biz!), perhaps they should look back to one of their most important brand touch points — the store — and double back those investments.

Incidentally, that’s something Amazon can’t do! (Yet.)

The in-store shopping experience, affected by a number of factors including service, scent, product selection, presentation, all contribute to how the consumer perceives the brand. As retailers have to be concerned with their omnichannel brand it is never good to leave a consumer with a negative experience via any channel. However, rather than driving a consumer online, I would say that subpar store conditions drive a consumer to an alternative brand, and not toward the online purchase from that brand.

Poor quality facilities surely contribute to shoppers going online, but when you expand the scope consumer reports says the number one complaint is too few open checkouts. Online means getting it done when you want without waiting, and it’s the convenience rather than the grime that is driving consumers online.

Braintrust
"While I’ll agree stores can be unkempt, it is quite a reach to say customers aren’t shopping due to that. The reason shoppers aren’t returning is because shopping isn’t considered fun."

"The most damaging in-store annoyance isn’t listed here: subpar staffing. There’s nothing more annoying than to come to a grocery store the day before Thanksgiving and find that two of the nine lanes are open. Really?"

"My grandfather, a ShopRite Supermarket operator and Wakefern member for many years, was fanatical about cleanliness. He was especially focused on the condition of the floor as the shopper entered the store."