Are the futures of retail and coworking space connected? 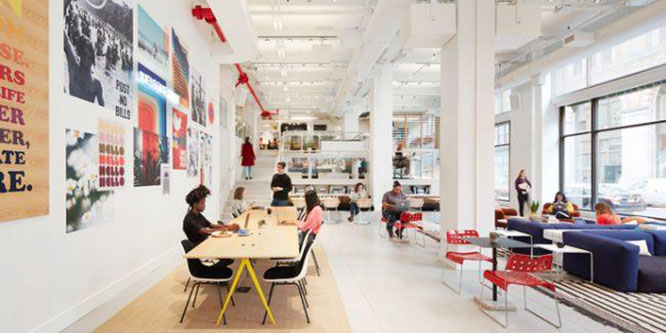 WeWork turned The We Company has some new ideas up its sleeve with the debut of a membership-free community space in New York’s Flatiron district called Made by We.

Part coworking space, part coffee shop, part retail, the 7,6400-square-foot space is billed as a new town hall centered around community. Following behind the footsteps of WeMRKT, a pop-in marketplace concept that sells snacks and office essentials to members, this appears to be the company’s very first standalone multi-dimensional retail space.

Situated in a prime area, the space is capitalizing off a healthy foot fall by also offering goods for sale curated by WeWork members. A towering wall of products ranging from reusable water bottles to laptop cases were selected during a series of “pitch nights” held by the We’s in-house creative team. For featured members, this creates a flywheel effect where they can not only network and develop their products within We’s walls, but also sell and gain valuable feedback from one another.

It doesn’t just stop there. In addition to discovering new products, visitors will also be able to grab a bite to eat or take a meeting at the popular Australian-influenced coffee outpost, Bluestone Lane, which shares the space. The upscale coffee chain was a strategic choice, representing a quintessential start-up success story with a mission of bringing people together. And people will be able to do just that with daily programming featuring prominent entrepreneurs and change makers across New York.

“Everything we do at The We Company, from the spaces we curate to the service offerings we provide, is intended to create meaningful human connections,” said Julie Rice, a WeWork partner, in a statement.

While the space represents a utopia in modern workspace, it does come with a price tag. Pay-per-minute seating starts at $6 for 30 minutes and $.20 per minute after that. For $65, you are granted a dedicated seat for the day. In comparison to a hot desk at the nearest WeWork location, the day pass is three-times as much as a hot desk, making it a less than ideal option for the daily grind.

The success of The We Company and others has gotten the attention of mall operators and retailers including Staples that are developing coworking models to drive traffic and engagement. The market for coworking space is forecast to grow 25 percent annually through 2023, according to Jones Lang LaSalle.

DISCUSSION QUESTIONS: How can malls and retailers benefit from coworking models? What can retailers, including those that are not exploring coworking opportunities, learn from companies in the space when it comes to creating human connections, etc.?

Please practice The RetailWire Golden Rule when submitting your comments.
Braintrust
"Creative retail innovation is the saving grace of the new world of retail. "

"The WeWork team has built a fascinating culture where startups, smaller companies, and independent folks can collaborate, and share and be a part of the community."

"Creating these spaces in stores and malls is an opportunity to bring people to a location."

11 Comments on "Are the futures of retail and coworking space connected?"

I think there are two intersections between retail and coworking.

The first is the actual development of coworking spaces within malls. This is happening more and more as mall owners look to use excess retail space for other purposes. An Industrious has just opened in Scottsdale Fashion Square and seems popular. The location makes sense – it is close to other businesses and lots of leisure facilities such as restaurants and cafes.

The second is using coworking places as retail spaces to sell goods made both by those working there and other retail businesses. I can see this being a success in some locations, especially as the items offered are relatively unique and interesting. However, this isn’t necessarily going to be a major draw for all general consumers; I see it more as a community venture.

It’s a matter of traffic feeding off of traffic. Years ago, some companies built their office buildings with a ground floor that housed a restaurant or two and some shops mostly offering services like haircuts, cleaners and so on. That concept expanded through the years with different models, and today many office buildings have places to eat, gyms and other services because it makes sense. Designers today are rethinking malls and finding ways of including hotels, and offices for the same reason. The WeWork company has taken it one step further by connecting independent workers through a different type of working environment and providing them opportunities for food and other services. However, they need to be careful not to price themselves out of the market. Those who are inclined to rent workspace are not typically companies but more so individuals and cost will be a big factor. WeWork has excellent ideas and hopefully they will sustain an audience but any great idea always gets followed by competition. If a competitor comes along with the same… Read more »
2
|
-4
-   Share

Creative retail innovation is the saving grace of the new world of retail. What The We Company shows is that coworking spaces are symbiotic with retail. One can help drive the other. It’s ideal for malls to capitalize on as they work on ways to drive buyer traffic. We need more of these creative ideas to help #saveretail.

The idea of a coffee shop or a convenience store in an office building is nothing new. The idea of charging to sit in that coffee shop by the 20 minute increment? I’m a skeptic.

But the headliner they used was that WeWork inhabitant goods would be featured. And this is where I become quite concerned for WeWork – expanding their menu (and changing their name) seems to indicate desperation at this point given their latest financials.

It’s an idea that carries some coolness but seems destined to fail in the details. Real retail details. What’s the floor space cost to do that vs the revenue benefit from dedicating a wall (plus the space around it needed to make it a good place to be)?

At the end of the day, they’re getting some nice PR from it. But I wouldn’t recommend others to attempt this unless something new happens at WeWork (or their bland new name) that past experience doesn’t show.

WeWork, or shall we call it The We Company has been at the forefront of the shared office space economy. With their premium monthly pricing for hot desks, offices and other shared office options, the WeWork team built an air of exclusivity but has also opened the door for lesser priced shared office companies to compete.

The WeWork team has built a fascinating culture where startups, smaller companies, and independent folks can collaborate, and share and be a part of the community. WeWork, especially in NYC, is ubiquitous, so it makes complete sense for the company to expand their community outreach with the membership-free Made by We community space in New York’s Flatiron district. This not only serves as a place of media to connect with potential tenants but also bridges the gap between the shared office space and commerce worlds.

The concept of providing free workspace for people to meet and work is not new. Throughout the day you can walk into a Starbucks and hear the sound of the fingers clicking on keyboards and conversation of important (and not so important) business meetings. It brings people to the store. Barnes & Noble created a space for people to relax and read — and of course purchase food, drinks, books, magazines, etc. I’ve been to hotels where they want the local business community to just hang out. That turns into food and beverage sales. Creating these spaces in stores and malls is an opportunity to bring people to a location. And when it becomes a habit, when it is the place they go on a regular (even daily) basis, there is potential for sales. If the location is right, office supply stores, book stores, coffee shops, food courts (that don’t feel like food courts), malls and more can potentially benefit from this concept.

It certainly depends on the mix, but retail and working spaces sure seems to be a good idea (including in our research). Let’s not forget food though, that could be the most important part of the mix.

I’m going to join the skeptics (who seem absent in the survey but somewhat more vocal here in the comments): WeWork-turned “We” — is “Wee!” next? — is known for two things (1) buying up a lot of high profile properties, recently and (in)famously the L&T flagship, and (2) losing lots of money. The latter is taken as a sign of success by some, but might give others pause … and will make still others question using the term “success” to describe them.

But regardless of what one may think of it, the M.O. has been to take places that are desirable to work, and then add on from there; I’m not sure how it would work — no pun intended — if one were to try it out at a place like a mall, that was desirable to shop at, or once was, but has no attraction beyond that.

I really like this concept and the design aesthetic combined with mix of retail and co-working looks delightful. Taking a meeting there seems fun. However, I have to ask — if WeWork or WeCompany was not overly flush with VC money, would this be a long term, profit generating business? Would someone invest in this concept alone? Paying extra to sit at an albeit nicer Starbucks with hopefully faster WiFi and shop from brands that may or may not be targeted to you just does not seem that profitable.

As a concept — seems cool and you can probably take some amazing Instagram photos of how you are “hustling,” but I can’t see this as a standalone business unless your rent per square foot is dirt cheap.

YES! More of this.

My favorite place to work in downtown SF is the Nespresso store. I don’t drink coffee, but I’m loyal to Nespresso. Why? The work space is free, comfortable, oozes of their colorful and adorable brand, and the ice tea is fab. I know of at least 10 new Nespresso drinkers in my circle, because I asked them to meet me at the store. The store did the rest.

Braintrust
"Creative retail innovation is the saving grace of the new world of retail. "

"The WeWork team has built a fascinating culture where startups, smaller companies, and independent folks can collaborate, and share and be a part of the community."

"Creating these spaces in stores and malls is an opportunity to bring people to a location."