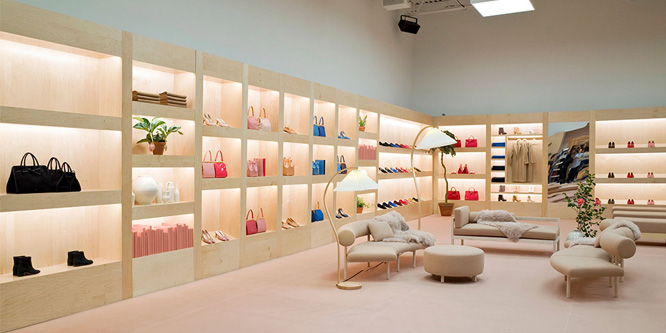 Describing itself as “retail meets WeWork,” Re:Store is an early startup seeking to help online-only brands secure both co-working space and their first physical storefront.

Under the monthly pay structure:

The company just received $1.7 million in pre-seed funding co-led by Sequoia and South Park Commons. The startup is one of the first to secure funding through Female Founder Office Hours, a mentorship program led by women venture capitalists.

Selene Cruz founded Re:Store after successfully launching a leather bags company online. In that D2C brand venture, she faced numerous challenges including having to store inventory in her home, regularly heading to the post office to mail shipments and being “extremely lonely” as a sole founder, according to a post on medium.com.

Customers would e-mail her with requests to touch and feel her bags, but finding physical space was a “grueling, expensive search.” The hurdles included demands for three- to five-year leases, large upfront cash commitments and six to eight months for scouting, build-out and staffing. The vision for Re:store came after Ms. Cruz turned her ground floor apartment into a showroom.

“You go on Shopify, you’re in business in one day,” Ms. Cruz told Fortune. “We wanted to replicate the ease of online to offline experiences.”

The concept appears similar to Public.Factory, which earned some attention when it launched in 2015 with a promise of providing furnishings, staffing services and flexible terms to start-ups to sell in shared spaces. Public.Factory’s first two locations in Manhattan have closed.

Re:store differs with the commission structure, inventory services and particularly the co-working structure that enables entrepreneurs to engage with shoppers. Wrote the company on its website, “We believe the future of retail is more than just a storefront but a sharable experience between makers and customers.”

DISCUSSION QUESTIONS: What do you think of the expansion potential for the Re:Store concept? Does the co-working element boost the appeal of the arrangement for sellers and customers?

Please practice The RetailWire Golden Rule when submitting your comments.
Braintrust
"I think we’ll have to come up with a new phrase for these concepts because there are enough of them that I don’t think this is just a fad."

"It makes total sense for such spaces to leverage their supportive and captive audience of entrepreneurs, freelancers, startups, and small businesses."

"What’s especially smart is the fact that the coworkers bring built-in customers and brand awareness for the makers using the space."

Is this the beginning of a department store concept repackaged?

Love it. Evolution at work. Solutions born out of market dynamics. Financial efficiency and a potential launching pad all in one. Oh, and by the way, there is a little available retail space at the moment that can be put to better use. Landlords need to put their dancing shoes on.

I think we’ll have to come up with a new phrase for these concepts because there are enough of them that I don’t think this is just a fad. It’s a natural extension of the new retail growth model: start an Instagram brand, find success with a niche, then physically go to the places where your consumers already are. “Retail as a Service”? “Store as a Service”? It’s basically taking infrastructure as a service to a whole ‘nother level, by including physical retail space, office space, etc. Neighborhood Goods is taking a similar approach with their concept in Plano, as are several other concepts opening (or already open) in New York. Not to mention the department store rush to open marketplaces. None of these have the co-working element, which is an interesting angle, but they all seek to help digital brands transition to the physical world. The question for me is, what does this mean for established brands? These upstarts don’t have the scale to compete directly — yet. Should brands reach back into the… Read more »
6
|
0
-   Share

Storefront as a Service — I’m into it!

Always love fresh new ideas and fresh new thinking in retail. But I would want to see the test results first. Experiment and run with what works.
On the other hand — this is a brilliant way of giving small startup and online pure-plays an opportunity to test out physical or omnichannel retailing. I can’t wait to see the results of whether co-retailing (retailing one product/brand set next to another), will have a treasure-hunt effect with consumers. Always drop in, because you never know what amazing fresh products you will get. Cool idea.

I can see this succeeding on a smaller scale if you flipped the emphasis of the two. Adding in more retail to a model like WeWork than the other way around. Sort of like an enhanced and extended product vending option to the workplace model. I cannot see working where people shop. Recreate the “store within a store” concept to a “store within a workplace” and this could yield some small incremental revenue gains. As this concept is defined, it reeks of desperation to me.

WeWork just announced a similar plan; at scale. It makes total sense for such spaces to leverage their supportive and captive audience of entrepreneurs, freelancers, startups, and small businesses. This will allow them to further monetize the platform they’ve created beyond “rents”; provide exposure to aspiring brands and provide a convenient shopping experience for their community.

It’s a fairly low financial commitment for a brand to get physical space — especially the retail and office combination. That is great. Ultimately these brands need foot traffic, so the quality of tenant mix will be a large factor in driving that. The office use seems to benefit the tenants much more than the majority of potential consumers.

Love all the women-led energy here! Looks a lot like Y-combinator-backed Bulletin the in retail model and a lot like the Wing, aesthetically, and with coworking space. (Those are also two women-led organizations. Hmm, a theme emerges?) Partnering directly the platforms these retailers sell on, such as Shopify, could create a steady stream of tenants. Kind of an unfortunate name given that Habitat for Humanity already uses the ReStore name for their thrift business.

Habitat for Humanity was the first thing that came to my mind, too.

I like this effort. It could be the next revolution in retailing. This is a fast, flexible and attainable model for those entities struggling to get on a level playing field.

Interesting concept, but testing and validating it in the market will be the challenge. A typical popup store build-out ranges from $1500 to $10,000, and at take rates of 20 percent of sales there won’t be much margin left over that warrants monthly rentals — unless the locations are prime locations (think 5th Avenue in NYC) — which means scaling the business model will be challenging. Today a smart entrepreneur can connect with businesses and set up some tables in the lobby of a large firm to sell jewelry, bags, cookies, whatever at minimal cost and bring in good sales numbers while keeping their profits, so demand is another issue. What’s suggested here are longer-term monthly space rentals. The concept needs to be tested and both price points and the model needs to work ahead of time. Not to mention some key biz dev with landlords to secure high traffic locations for their customers. A few select deals won’t be enough to scale the business and make it worthwhile, this has to be continuous to… Read more »
2
|
0
-   Share

“Storefront as a Service” is a great description and one that will in fact be the future of physical retail. The idea of being a “sharable experience between maker and customer” meets the expectations of today’s shoppers. I would add that the supply chain, inventory and stocking issues need to be addressed in order for this concept to thrive. As we’ve seen time after time, counting on human proficiency always seems to fall short. The makers (manufacturers) should take control of this aspect through technology that monitors, tracks and reports at-shelf inventory of every item on a daily basis. The cost will be inconsequential to the benefits for both the customer and manufacturer.

The definition of a store continues to evolve and the Re:Store concept is Re:Inventing the store. As entrepreneurs launch new retail products and brands, it is inexpensive and easy to get their online store up and running, but establishing a physical store presence is expensive requires a lot of work.

The Re:Store concept is also great for consumers, as it provides a one-stop shop to see the latest new products. Combining it with work space is great for start-ups as well, as they will have just a few people and when they aren’t “working” they will take turns staffing the store. The store is not dead but morphing into something that will entertain us and challenge our notion of its definition, purpose and function. Just look at the bank, Capital One, who is combining a bank with a cafe — reinventing retail.

Re:Store is a very imaginative concept and I’m a bit smitten with the “storefront as a service” label coined here by Nikki and Joanna.
Then again, isn’t that what all retailers do for their suppliers in essence? The economic model is innovative and the hurdle has been lowered, but Re:Store doesn’t seem to have a unifying merchandising concept of its own. It’s essentially a miniaturized mid-town mall where visitors may discover and experience an assortment of online-only brands. Probably great fun to visit, but it’s effectiveness at driving sales remains to be seen.
I think “showroom as a service” may be a better descriptor.

Cruz has taken two high-demand trends — the makers movement and coworking spaces — and combined them to create an exciting new store model. What’s especially smart is the fact that the coworkers bring built-in customers and brand awareness for the makers using the space. I hope to see this concept catch on.

You’re absolutely right, Jasmine. I have a feeling this concept will spread quickly.

I think concepts such as this for retail and food halls for the restaurant business are reinventing our landscape. LOVE IT!

This is just one on many new models of “shared spaces” that are coming on the scene — where live, work, shop, visit and just hang out are being merged.

The concept seems to be two-fold, one increasing productivity of D2C brands through better office space and services like logistics and delivery, where the currnet offering is light. The second is access to WeWork’s traffic of co-workers, where opening retail storefronts are akin to walking through malls in Hong Kong in order to get to your office. Ultimately, what ties these together is a sense of reinforcing community: “these stores are people just like you.” But to be successful, Re:Store will have to solve meaningful challenges to either problem, building on elastic retail storefronts with traffic and promotion throughout their network in each building or creating better logistic, procurement and marketing systems for their tenant companies. I actually believe they can accomplish both and we could even see a retail-focused WeWork building sometime soon as vertically-focused co-working becomes a more dominant model.

Braintrust
"I think we’ll have to come up with a new phrase for these concepts because there are enough of them that I don’t think this is just a fad."

"It makes total sense for such spaces to leverage their supportive and captive audience of entrepreneurs, freelancers, startups, and small businesses."

"What’s especially smart is the fact that the coworkers bring built-in customers and brand awareness for the makers using the space."