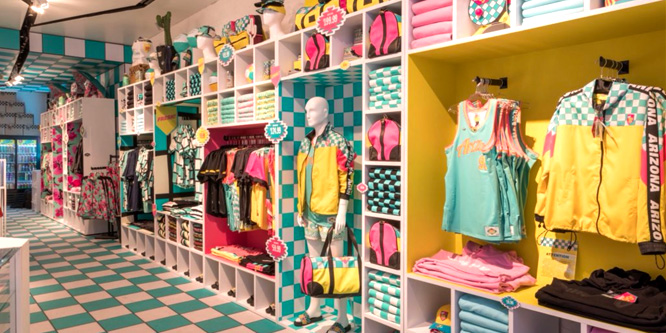 AriZona Iced Tea, founded in Brooklyn in 1992 as a value proposition to the initial craze around Snapple, last weekend opened a streetwear-themed pop-up to celebrate its 25th anniversary.

Open from May 16 to 21, the pop-up was “inspired by the vibrancy of our iconic designs and patterns, 90’s nostalgia, and the youth culture that has defined our brand,” according to the greatbuy99.com microsite. The “Great Guy 99¢” symbol has long adorned AriZona Iced Tea’s 24 oz. cans.

About half the store was packed with merchandise (many limited-edition), paying homage to the brand’s original teal-and-white gingham and cherry blossoms design.

The brand incorporated a hidden “speakeasy” back room, the Green Tea Garden, for vendors to use to do embroidery and other customizations for shoppers. Local tattoo artists were on hand on four of the days. The other half of the store resembled a classic 99-cent store with a wide selection of the brand’s beverage assortments.

Coolhunting.com wrote, “The main attraction might be the installation itself, a photogenic space for Instagram enthusiasts to enjoy that honors the brand’s aesthetics.”

The sons of the brand’s founder, Don Vultaggio, now run the brand.

“We really wanted to capture the nostalgia of our brand and our early 90s Brooklyn roots,” Wesley Vultaggio, one of the sons, told Forbes. “Our brand has become synonymous with NY street culture and we decided to honor that with a collection celebrating what our father created 25 years ago.”

The 90’s theme was seen as particularly appealing to Millennials, who are frequently referred to as more obsessed with the era they grew up with than any other generation. Pepsi recently brought back a Cindy Crawford television commercial from 1992 and is featuring Britney Spears on its cans to likewise capture ’90s nostalgia.

DISCUSSION QUESTIONS: What made AriZona Iced Tea’s pop-up Instagram-worthy? Which elements stand out the most in terms of appeal to fans: the 90s nostalgia, exclusive streetwear and merch, secret customization room? Would such nostalgia-themed pop-ups make sense for many other brands?

Please practice The RetailWire Golden Rule when submitting your comments.
Braintrust
"For AriZona to have pulled this off, they had to actually tap into their fan base and create something that resonated with them."

"The trend of ’90s nostalgia is extremely popular and resonates strongly with Millennials."

"Milllenials are having fun with the revival of ’90s! But make no mistake, they’ll buy and resell that kitschy cool merchandise on eBay toot sweet!"

Great timing given the signature AirZona color tones and the seasonal introduction of something new. The multiple experiences on location make it further worthy of investigation and the range of product pricing means that everyone who enters can become a customer. 100 percent appealing with 100 percent conversion. Other brands could do with thinking similarly outside the box.

I thought this was executed well. For AriZona to have pulled this off, they had to actually tap into their fan base and create something that resonated with them. This would have been, as my teenage brothers say, “cringey” had it missed the aesthetic mark.

It’s fun, it’s kitschy, it reminds Millennials of their youngest days. Many brands could do the same, but unless they get creative, it would simply be a copycat strategy.

This looks like a fun concept that plays on people’s retrophilia. It also provides an experience. In short, it’s a smart way of connecting with consumers in an era that is so crowded with marketing messages.

AriZona did a great job with this. Millennials love ‘90s nostalgia, and streetwear is super in right now. The icing on the cake is how well these elements mesh with AriZona’s brand. As Joanna pointed out, this popup could have easily been “cringey.” Arizona’s signature teal, white, and pink color scheme and mixed checkered/floral patterns lend themselves particularly well to this kind of ‘90s look.

… anyone else have the urge to break out a ‘90s windbreaker right now?

This is a pop-up store that is extremely well done, grabbing nostalgia and themes that works for all ages. Very bright and visual which stands out from all the rest. The perfect kind of experience to be captured on Instagram and then promoted by customers. That is an awful lot of prep and resources for such a short run and a lot of brands couldn’t afford it, or execute it My question for AriZona would be whether there is enough ROI beyond the marketing play to keep such this kind of format open longer, at least through the course of summer.

Milllenials are having fun with the revival of ’90s! But make no mistake, they’ll buy and resell that kitschy cool merchandise on eBay toot sweet!

To Chris’s point — it does require quite a number of resources for prep and execution so brands who try something similar in the “pop-up” strain need to make sure A.) they have a sound strategy for notifying their most loyal customers about the event and B.) a plan for post-event press and publicity which will help justify the cost.

I definitely think a big draw to these types of events is the value that a consumer feels by being “in the know” that something is going on. Does anyone have any past experience or stories about different ways brands have spread the word about similar quasi-secret events that leverage scarcity?

A brand can’t tap into nostalgia “just because.” The retail story has to be an extension of the brand purpose and ethos or else it will be overlooked. This pop-up does a great job at combining multiple tactics that appeal to this generation of experience seekers without over indexing on one over the other:

On an unrelated point, I also LOVE how they are paying homage to the “family business” and hope they continue to own that narrative moving forward.

Agreed, Gabriela. The brands doing nostalgia the best are the ones that have strong roots in the decade they’re throwing back to.

It’s fun, it’s colorful and it gets your attention. Whether the consumer was even an AriZona fan or not, This pop-up is likely to get them to come in and take a look. It offers an experience and who doesn’t love a new, fun experience! What do you do with fun experiences these days? Take pics. Voila and my 2 cents.

We’ve been talking about this idea a lot at my company. The trend of ’90s nostalgia is extremely popular and resonates strongly with Millennials. This is really nothing new. Most people feel nostalgic about their youth, so pop-ups give us an opportunity to relive those moments for just a little while. I think many other brands can take this idea and run with it in their own way. Finding a way to tie an authentic connection to the event or promotion will be the key to success.

First , I have to disagree — utterly — with the premise that Millennials are somehow more obsessed with “their” decade than prior generations. Having grown up in the ’70s when it was swept by a tidal wave of ’50s nostalgia — been there, done that.

As for the shop being nostalgic, perhaps, but what I see is colorful and unique merchandize cleverly presented … you know, what we call “good retailing.’90s memories seems but a small part of it.

Braintrust
"For AriZona to have pulled this off, they had to actually tap into their fan base and create something that resonated with them."

"The trend of ’90s nostalgia is extremely popular and resonates strongly with Millennials."

"Milllenials are having fun with the revival of ’90s! But make no mistake, they’ll buy and resell that kitschy cool merchandise on eBay toot sweet!"