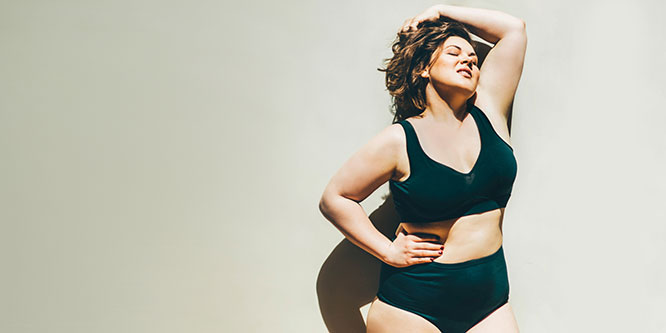 Many brands, especially in the apparel and beauty space, have embraced body positive messaging in recent years, although critics charge the movement focuses too much on appearance. Is body neutrality any better?

Anne Poirier, an eating disorder specialist who coined the phrase in her book, “The Body Joyful,” defines body neutrality as “prioritizing the body’s function and what it can do, rather than its appearance.”

The thought process moves away from intense positive or negative judgments about the body and how it looks, and focuses more on acceptance. While body positivity has been seen as beneficial to society’s perception of weight and body standards, critics argue the movement ignores the health risks associated with carrying excess body weight. Many see maintaining unwavering body positivity as an unrealistic goal and believe it can inadvertently cause feelings of failure.

Charlotte Cowles , writing for The New York Times, said body neutrality might appeal to those “who find the warts-and-all approach of body positivity to be a bit, well, contrived. Do we really need to embrace our cellulite and tendonitis? Why not just aim for a more peaceful coexistence?”

Charlotte Markey, a psychology professor at Rutgers University at Camden and founder of its Health Sciences Center, told The Washington Post that she thinks of body neutrality as “understanding that it’s important to respect and care for your body, and to divorce that from your evaluation of your physical appearance.”

Critics of body neutrality argue that pursuing such a sense of detachment doesn’t do enough to bolster self-image. For some, the path to caring less about how you look and more about how you feel is not easy when body-centric content — whether positive or not — is all over social media and commercials.

Wrote Nicola Dall’asen for Allure, “Every time I’m about to dip my toe in the body neutrality water, I hesitate because, while I can acknowledge that my body’s appearance isn’t and shouldn’t be the most important aspect of my being, I also can’t deny that how my body looks has always affected my thoughts, feelings, personality, sexuality — all of it.”

Please practice The RetailWire Golden Rule when submitting your comments.
Braintrust
"Body positivity or body neutrality – the core message is the same."

"How about just human positivity?"

"Very profound topic, but perhaps we should be asking this question of psychologists not marketers?"

Regardless of where we wind up, influenced by over-the-top political correctness, ours has been and continues to be a culture – unlike some – in which the svelte and healthy looking have always been admired.

Body positivity or body neutrality – the core message is the same. Changing terminology is not going to address marketing, social media and fashion’s unapologetic beauty standards. We need to push the industry to encourage inclusive sizing and adjust fit blocks/development to better represent the customer.

Very profound topic, but perhaps we should be asking this question of psychologists not marketers? CMOs and their creative shops build campaigns based on imagery, talent and copy. The image of the brand and the talent wearing the clothes or expressing their allure in fragrance spots, or Jennifer Aniston attempting to convince us she actually has an Aveeno regimen, is what sells. The inner self, or id, is pretty hard to project, which body neutrality attempts to draw from. I don’t think consumers would have the slightest clue if an advertiser attempted to cross this path.

The phrase “body neutrality” is new to me — as is “body positivity.” Recently I have become aware of ads and online promotions of apparel that use models of various sizes and shapes. And I applaud that. I think it’s all in what brands and retailers do and not what they say. The concept (I suppose) of body positivity (unspoken phrase) has shaped the apparel market forever, while women and girls tried to measure up to what was highlighted as perfect. There was no statement, only the visuals. I trust that marketers will be smart enough not to emphasize either phrase and demonstrate their offerings on the bodies of all women. Then I will know they have me in mind and are not encouraging me to aspire to be anything but me. Using the phrase “body neutrality” is off putting — and just another way of saying “not perfect.”

It does not matter which phrase becomes more dominant in the marketplace. I feel that we need to quit focusing on body shape and focus on physical and mental well-being. We are becoming a country of overweight, out-of-condition people. We need to be marketing a healthy lifestyle. You can not be living a healthy lifestyle if you are 100 pounds overweight.

How about just human positivity? Every brand is trying to promote a lifestyle that is unique and different whether it is aspirational, happy, tough, soft, or rugged. The focus should be on representing that brand to it’s intended audience in an inclusive way. Let’s be smarter about how we advertise to this next generation.

As the writer, I could only think of a few brands, maybe Nike and Lululemon, that could embrace the functional aspect of body neutrality and I’m not sure it would be beneficial for them. Most fashion and beauty brands are closely aligned with looks and appearance so I’m not sure what they’re messaging would be around body neutrality. At least body positivity is still all about looking (as well as feeling) good.

The terms Body Neutrality and Body Positivity have quite distinctive meanings, the topic is really insightful and highlights various ethical facets, but it gets really difficult when it comes to implementing these aspects in the real life. I feel that the brands must refrain from the debate and should only try to be inclusive of all the sizes so that they can cater to all the customers. They must find the right positioning strategy in order to reach their Ideal Customer Profile. If a brand is manufacturing plus sizes that doesn’t mean they are not inclusive of smaller sizes. The customer appreciates a brand if they have “something for everyone.”

Braintrust
"Body positivity or body neutrality – the core message is the same."

"How about just human positivity?"

"Very profound topic, but perhaps we should be asking this question of psychologists not marketers?"