Can GameStop reboot itself? 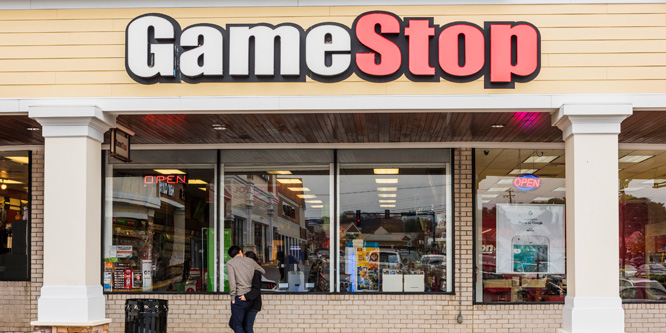 Being mentioned in the company of Blockbuster, Circuit City and Borders, doesn’t suggest good news for GameStop.

Articles citing comparisons to those retail collapses arrived last week after GameStop reported disappointing first quarter results, including a 10.3 percent drop in same-store sales, as well as a decision to eliminate its dividend to shore up its balance sheet. Shares fell 36 percent last Wednesday on the report.

On its quarterly conference call, George Sherman, who took over as CEO in April, said the retailer’s turnaround “will require immediate action on our part and an ongoing sense of urgency that is off the charts.”

To a degree, GameStop’s challenges are tied to the end of the current gaming console cycle. Sony’s PlayStation 4 and Microsoft’s Xbox One were released in 2013 and gamers may be waiting for the next-generation platforms to launch next year.

The bigger challenge, however, is that gamers are playing using digital downloads on smartphones. Nintendo, Sony and Microsoft offer options for downloading games directly from their networks, and Electronic Arts and Activision are also experiencing digital growth. Google, Amazon and Apple are all believed to be developing Netflix-like subscription gaming services. The digital downloads further eliminate GameStop’s profitable pre-owned games business.

On the positive side, books, CDs, movies and other categories were generally seeing modest growth when they were disrupted by digitization. Gaming, however, is surging in popularity as witnessed by the rise in esports.

GameStop is by far the leader in the category with 3,777 stores domestically and 1,912 internationally.

GameStop’s turnaround strategies so far include de-cluttering stores to focus on best sellers, expanding “collectibles” like action figures and T-shirts and offering more “immersive and interactive experiences.” The retailer plans to leverage its 60 million loyalty members to not only drive traffic but support the marketing efforts of games publishers, console makers and esports leagues. Said Mr. Sherman, “We’re evaluating new revenue streams and how we can and should participate in the digital economy.”

DISCUSSION QUESTIONS: Are the comparisons between GameStop and chains like Blockbuster justified? Do you see a path for GameStop to reinvent itself and participate in the digital economy? What lessons can GameStop take from past categories that have undergone digital disruption?

Please practice The RetailWire Golden Rule when submitting your comments.
Braintrust
"Comparisons [to Blockbuster] are completely justified. Besides shifting customer behavior and trends, they are significantly over-stored."

"GameStop can do one thing Blockbuster couldn’t — migrate from being a distributor of content to a content creator."

" If you realize the product you’re selling is being sold elsewhere for cheaper and more easily accessed, then pivot to teaching someone how to use the product."

13 Comments on "Can GameStop reboot itself?"

The comparisons between GameStop and Blockbuster are understandable. The disruption GameStop is facing is coming from multiple fronts – changing consumer behavior and from major game publishers selling games direct to consumers online. Google’s recent launch of its online gaming service adds to the difficulties. Combine these market dynamics with organizational disruption, including a revolving door in the CEO’s office, and it’s not hard to see where this company is headed. Not good.

That all said, I think there is still hope for GameStop – albeit faint hope. The gaming market is strong and growing and professional gaming is creating new opportunities.

It may be too late for GameStop. The comparisons are justified. The path and channel have shifted and just as some will walk into a record store if they are into vinyl, most will download from their music subscription. Gaming companies have the direct path to the consumer and it is not likely to change. Relating to yesterday’s Barnes & Noble story, Leonard Riggio would have been well served not getting into this business or getting rid of it earlier.

Comparisons are completely justified. Besides shifting customer behavior and trends, they are significantly over-stored. There are at least 4 GameStops within a 5 mile radius of my house in suburban South Florida. Most are in strip malls that aren’t extremely high traffic. I’m assuming the original thinking was that the stores would be “hangouts” for game-loving teens. But with technology, kids no longer need to be in the same place to play games.

I do not see a long term future for GameStop. With the advent of 5G and even more powerful smartphone platforms, gaming content is going to become even more digitalized than it is now. Under such circumstances, there will be little need for a chain of stores. What value do they add? Sure, GameStop could try and make them more experiential or places where gamers could hang out, but I don’t see an effective way to monetize this.

I think we need to think differently here, (see my post,) and separate the future of GameStop from the future of its physical store network. To me the critical issue is whether the company survives and — if it does — what the appropriate platform or platforms enabling that survival should be. It may be that the company survives as a digital pure play or, as you suggest, operates a greatly reduced number of experience environments, as opposed to traditional retail stores.

Any business that trades in content that can be more efficiently distributed digitally is at risk these days, but creative solutions have helped preserve independent book and music stores. In the case of GameStop, I suggested they move from distributing content to creating it and then distributing it on a proprietary basis. May not be the best idea, but it is one solution emerging from thinking differently about the problem, and that is what they have to begin doing if they hope to survive.

I guess the comparisons are fair … with a caveat. Blockbuster was undone by streaming video services and cable networks. And, Tom is right that that same downloading technologies will have an adverse impact on the chain’s sales. But, GameStop can do one thing Blockbuster couldn’t — migrate from being a distributor of content to a content creator. It’s easier and cheaper to create a game that is only available through you than it is to produce a blockbuster (excuse the pun) movie or television series.

There isn’t a big market for redundant physical distribution, but gamers are always looking for new games. So if I were George Sherman, I’d run a contest for the best new game from an amateur game maker, find the four or five creatives out there that really have what is needed, and create a stable of in-house content developers. Might not work, but it beats the hell out of bankruptcy.

It’s justifiable to compare them if the question we’re asking is “are CDs/disc of games equivalent to VHS and DVD at Blockbuster,” but not past that. The internet didn’t exist to the degree it does now, which gives GameStop way more latitude to reinvent itself and pivot. Its physical stores, while substantial and likely overdue for some closings, are actually its asset. GameStop needs to be hosting neighborhood video game battles and have gaming experts available for training and coaching. Similar to Guitar Center giving guitar lessons.

Look — If you realize the product you’re selling is being sold elsewhere for cheaper and more easily accessed, then pivot to teaching someone how to use the product.

GameStop as it exists today is no longer a viable business model. That being said, gamers create an extremely unique and passionate community so I think there is certainly a path forward if they can figure out the right way to reposition their physical space and engage their customers in a more regular cadence.

This would be a fun one to work on with imagination being the limit and not much to lose given their current trajectory.

One might argue GS is in an even WORSE spot than BB, since its name is so closely tied to its product: change the name, lose the brand equity, keep the name, risk losing any relevance. I think a closer analogy might be RadioShack … uh oh!

GameStop was WAY ahead of its time, already developing a streaming format in 2011 before the technology was ready for it. I think they should watch the mistakes being made by the giants, and then swoop in with their own streaming subscription now that technology will support their endeavors.

Here is the hard fast reality of GameStop. Out of 5 kids surveyed, not one has stepped in a GameStop in 2 years or more. The older kids say, “They are too expensive. They don’t give you enough on your trades.” The younger kids say, “We download our games from online sites, what is a GameStop?”

Would love to see GameStop repurpose their retail footprint to include space for Location-Based Entertainment (LBE) experiences and premium VR attractions. Such attractions operate within 150 sq ft and offer a percentage yield in excess of 1,000.

GameStop is in a very difficult and dangerous position, created between streaming, online games, and ability to order games for home delivery. The world will become even more dangerous for them with the advent of 5G allowing for very high performance gaming while streaming. However, I don’t think this means we should start carving the grave marker as GameStop has a unique opportunity, right now with low expectations, to pivot and reposition themselves.

I am not claiming to have the answer, but what about a gaming lifestyle company, providing anything and everything the gamer needs to enjoy gaming to the fullest? They could hire gaming social media influencers and eSports celebrities and take a page from the likes of Van’s, Ulta, West Elm, and others who cater to either a real or desired lifestyle.

Braintrust
"Comparisons [to Blockbuster] are completely justified. Besides shifting customer behavior and trends, they are significantly over-stored."

"GameStop can do one thing Blockbuster couldn’t — migrate from being a distributor of content to a content creator."

" If you realize the product you’re selling is being sold elsewhere for cheaper and more easily accessed, then pivot to teaching someone how to use the product."