Can RadioShack come back from bankruptcy — again? 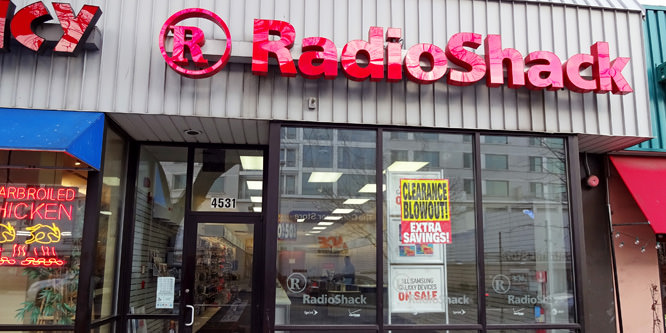 RadioShack is headed to bankruptcy court again. The chain’s owner, General Wireless Operations, filed for Chapter 11 yesterday after having previously announced it was in the process of closing 200 of its 1,500 stores.

Dene Rogers, the former CEO of Target Australia and Sears Canada, who took over as CEO of RadioShack last May with plans to reinvent its business model, said the company was making progress, but more was needed.

“In 2016, we reduced operating expenses by 23 percent, while at the same time [we] saw gross profit dollars increase eight percent,” said Mr. Rogers.

“For a number of reasons, most notably the surprisingly poor performance of mobility sales, especially over recent months, we have concluded that the Chapter 11 process represents the best path forward for the company,” he said. “We will continue to work with our advisors and stakeholders to preserve as many jobs as possible while maximizing value for our creditors.”

Mobility sales at RadioShack were under the control of Sprint, which partnered with General Wireless to keep about 40 percent of the chain’s stores open following its previous trip to bankruptcy court in 2015.

Sprint, according to a Wall Street Journal report, has reached a deal with General Wireless to end the partnership between the two. Sprint will pay $17 million and convert “several hundred” Sprint/RadioShack stores to Sprint corporate locations to unravel the deal.

RadioShack, according to a company press release, is “currently exploring all available strategic alternatives to maximize value for creditors, including the possibility of keeping stores open on an ongoing basis.”

DISCUSSION QUESTIONS: Does RadioShack’s team simply need more time and credit to turn the chain’s business around? Will separating from Sprint help RadioShack achieve a turnaround?

Please practice The RetailWire Golden Rule when submitting your comments.
Braintrust
"Convert the locations to whatever platform you can convert them to and move on."

17 Comments on "Can RadioShack come back from bankruptcy — again?"

There’s only so much damage a brand can sustain and RadioShack has long past its limit. New management means new hope, but when the hole is so deep — which it is for RadioShack — there comes a point when it’s irredeemable. That’s where RadioShack is, in my opinion. I’m not sure what “strategic” options they may be exploring, but any further investment in RadioShack sounds like good money chasing bad.

RadioShack, like Sears and Kmart, is a retailer whose time has passed. The products sold at RadioShack stores are readily available from other stores, both online and brick-and-mortar, often at a lower price and with greater convenience.

Turn the business around to what? RadioShack was an irrelevant retailer 10 years ago. Convert the locations to whatever platform you can convert them to and move on. We don’t use radios much anymore, we can buy batteries and stereo cables online and we don’t need more cell phone stores. It’s time to pull the plug on the life support.

With mobile sales declining and RadioShack long ago losing the battle for consumer electronics, I believe another reason to shop there has been battered by competition. That category would be batteries, especially unique and hard-to-find batteries. With Batteries Plus Bulbs growing so fast in recent years and with it newer, fresher-approach real estate locations for its franchisees, I think RadioShack has lost this stop-in customer segment as well.

Unfortunately for RadioShack, the once-ubiquitous brand’s time has come and gone. Certainly the RadioShack team may be actively exploring ways to maximize value for their creditors. However, from a brand recognition and branding perspective, the RadioShack brand has become a relic of the past, joining the ranks of what ultimately became of Woolworths, and what Sears, and Kmart are experiencing now.

In today’s retail universe, the DIY electronics value proposition that RadioShack was known for simply is not in vogue any longer. The brand, as many others unfortunately didn’t do over the past 10 years, didn’t adjust to the changing times and technology innovations.

Few retailers can come back from a bankruptcy. They need a new name and new format. Plus they need to separate themselves from anything from their past. The old ones don’t work. The last time I was in a RadioShack was about five years ago during a store closing sale. That’s the only way I’m going to return to RadioShack, is if a store has another closing sale.

It’s all about relevance. Shoppers no longer relate to the store format. The retailer name no longer resonates with consumers. And despite attempts to streamline stores and improve the sites themselves, in my opinion keeping current formats on life support is not sustainable.

Retail is relevance indeed, Dave. Reinforcing the mission message of “we are your X store” is core to success. Telling the story, selling the story and engaging consumers in that story can be lost in the excitement of products offered (which are too often “us too” offerings). When a retailer fails to communicate its identity and then march to that tune, peril is the outcome that can be expected.

RadioShack has a long history of putting lipstick on a pig. It’s over.

The chain lacked brand leadership and subsequent relevance. Ask them, they think they re-branded a few years back. A new logo mark and using the colloquial term “the Shack” is not re-branding.

In my business (re-branding) we put the fear of God in clients by warning them to not become “the Shack.”

In brand terms, RadioShack is the movie equivalent of jumping the shark.

RadioShack long ago lost all brand identity with consumers. I don’t know anyone who is in the market for a new mobile device who says “I should go to RadioShack” to buy it. If mobile sales aren’t saving the day, there is little else they can do to turn things around. If management can find a unique brand identity there may be hope, but at this point it’s unlikely.

RadioShack’s time has come and is now gone. They were good during the period when they had little competition. Now times have changed. We can buy everything RadioShack used to sell cheaper and at many other locations. As George Burns used to say, “Say good night, Gracie.”

With broken hearts everyone seems to be suggesting that this dog needs to be put down. Indeed it would be the kindest thing to do. But what if …

What if there is some genius out there who has an idea? My personal mantra is to live life asking only one question: “What is possible?” Can RadioShack ask that one more time?

In order to have a successful turnaround, RadioShack would have to completely re-energize and reinvent themselves to make them relevant in today’s marketplace. Realistically, I don’t see that happening.

RadioShack may not be able to bring itself back from the brink, but there’s a lesson in here for other older brick-and-mortar retailers who are struggling to move into an increasingly online ecommerce world. Think of dotcom era physical stores like Egghead Software, which sold packaged software at retail. At its peak, they had over 200 stores — but of course, nobody buys packaged software any more. The industry has gone to a software-as-a-service model, and Egghead never quite adapted to the new SaaS model. RadioShack too, if it is to have any chance at continued existence, must take a close look at who their customers are and what they really want, and pivot their business model dramatically to adjust to those new realities.

“Let the dead bury their own.” Good advice then, good advice now … though I have a feeling we’re going to be asked this same question seven more times.

This is a brand whose time has come…and gone. RS is done. There are no more visible signs of life here, nor should there be. RIP RadioShack.

Braintrust
"Convert the locations to whatever platform you can convert them to and move on."