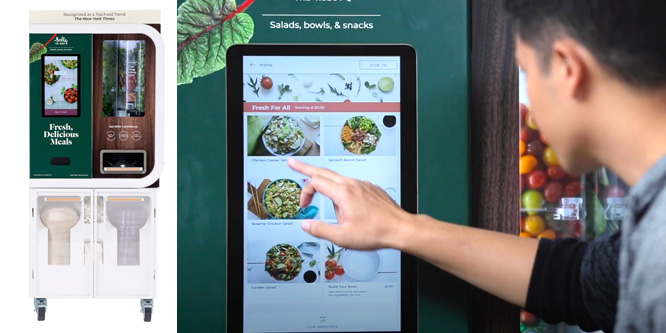 The novel coronavirus pandemic is giving grocers a new reason to consider robots for food preparation.

Robotics startup Chowbotics recently signed contracts with three grocery stores for its automated salad bar robot, known as Sally, according to a CNBC article. The $35,000 units were originally being targeted for hospitals and colleges, but the early closure of many colleges as well as reduced business from hospitals led the startup to look for other markets. In grocery, Chowbotics found stores looking for a way to provide a salad bar-like experience without the sanitation concerns and perceived risk of a conventional setup.

The Chowbotics website bills Sally as “the most hygienic custom salad bar experience available on the market.” The current iteration can hold up to 22 ingredients.

A demonstration video of Sally 2.0, the machine’s latest incarnation, shows people selecting and ordering meals from a touch screen. Sally then puts together the meal by dispensing the correct fresh ingredients from a rotating carousel of see-through ingredient containers.

Because of the premium now placed on contact-free interactions to promote safety, the startup is moving quickly to add features such as smartphone app-based ordering and QR code-based payment, according to CNBC.

In the pre-COVID-19 world, there was a growing demand among customers for prepared meals to go and expansive hot bars and salad bars. Offerings that were originally available at higher-end operations like Whole Foods became a regular sight at non-specialty grocery stores and convenience stores throughout the mid- to late-2010s.

The novel coronavirus pandemic put such offerings on pause, at least temporarily, as the open layouts of hot bars and salad bars do not allow customers to maintain social distance.

Also in the latter part of the 2010s, food preparation robots began appearing more frequently in the restaurant world, though such technology has remained niche.

For instance in California, a startup called Creator opened a restaurant utilizing a robot capable of making a custom burger to spec with only a $6 price tag.

Flippy, an automated burger-flipping robot, appeared at California-based burger chain Caliburger in 2018, and as of early 2020 had signed an $11 million five-year contract with the chain, according to TechCrunch.

DISCUSSION QUESTIONS: Will robot food prep achieve mainstream adoption due to COVID-19? How do you expect that most retail and foodservice operations will handle prepared food prep in light of the current situation?

"Robot salad bars are a short-term fix, but a slippery slope. When the virus is over, will all robots exit the supermarket and humans get their jobs back?"

"...the fact remains that the days of “open air” salad bars, olive bars, etc. may be behind us, at least for a while, and something has to replace them."

16 Comments on "Can robots keep the salad bar safe?"

Like it or not, the future is moving towards a lack of person-to-person interaction. This is common in countries like Japan and will be making its way into our new normal over the next three to five years as businesses need to automate in order to maintain margins for investors.

I’m thinking of that robot coffee bar in the United gates at San Francisco airport that debuted last year – quality was supposed to be almost as good as Starbucks but with much faster throughput. Less time in lines near other people is certainly a measure of quality/customer experience that we’ll have to consider in all our interactions.

This does make sense from an efficiency and a health point of view and is a good replacement for some aspects of self-service food-bars which are seen as a health hazard. That said, I do wonder how these machines will be able to provide the breadth of options that were available before the pandemic. Whole Foods’ hot and cold food bars, for example, offered a very wide variety of different frequently changing products. It is also the case that many people like to see and smell the food in order to decide what to buy. On top of this, people’s selections are often very random – in terms of the combination and volume of items they put in their box – and so can’t be easily programmed into a computer. As such, this is an imperfect solution. Another less high-tech alternative is to have staff serve on food bars, putting together selections for customers – which is what Whole Foods has done in a number of locations.

It looks like fun. But one of the things I like about the hot/cold buffet/salad bar (at Whole Foods) is picking the selections that move me as I look at them just waiting for me.

That said, yes, robotics will become more prevalent in food prep and food service as many of the actions are quite mundane. I can imagine fast food being entirely robotic from ordering to delivery. It has nothing to do with the pandemic, but the reality of technology and ROI.

This is an interesting topic. I, for one, am probably a lot closer to never when it comes to going to a salad bar whether served robotically or not. How do we know how the food was handled prior to the robot? But then, what about that factor with a salad served at a restaurant? I am not sure what I will do when faced with that decision. I have said before I am not ready to go to a restaurant. Yes, they need the business and I understand it. But are we ready to return to eating in restaurants? Count me in the “take out” group for a while at least.

Adding robots to the salad bar might address concerns about contamination, but it sidesteps the consumer attraction. Salad bars allow one to jump around, make decisions based on what looks good, and create a just-now experience. Adding a touchscreen and a robot might streamline and sanitize the salad bar operation, but it won’t add customer value.

People love salad bars and buffets so contactless ways to serve food are getting creative. I like the Sally option but it still feels like a vending machine because that’s what it is. It’s probably the wrong perception here but I don’t generally equate fresh with vending machines.

I watched a lengthier video on YouTube that showed a customer’s salad being prepared. It looked like the ingredient tubes could quickly run out so a dedicated associate would need to be assigned to keep the machine full at peak times. There was a limited choice of salad dressing but no option to get it on the side, and the entree size salad looked small inside the large bowl provided.

But it’s definitely an improvement over traditional salad bars. Whoever thought the Vegas buffet would make a comeback? It has at Wynn Las Vegas where your buffet choices are now served table side. Guests can still pile on the crab legs as much as they like within a two hour window.

I don’t think it will be because of COVID-19, although pandemics do have a way of accelerating existing change. As the article notes there has been quite a bit of work done in the area of robotic food prep anyway, so this is more like finding a reason for technology that used to only have novelty value. There are still issues here — like how do you keep the touchscreen clean and the fact that it’s much easier to transmit the virus on the packaging than it is on the food itself — but the fact remains that the days of “open air” salad bars, olive bars, etc. may be behind us, at least for a while, and something has to replace them.

Having started my career in the supermarket business, I can say that sanitation practices have been spotty at best as I traveled in the U.S. and throughout the world. It’s a shame that it had to take a global pandemic to highlight the need for consistent and effective food safety practices. Hopefully, new practices put in place will last long-term.

This isn’t about a COVID-19 solution. This is the future, and the future is now. Personalized orders that are perfectly portioned out. This gives the customer what they want and gives the grocer or restaurateur some level of inventory and quality control.

Interesting. And for colleges and hospitals probably a superb idea because the quality of salad must be limited. If that’s the case, they will be a disappointment for areas where more food sophistication is demanded. Also, are these really robots or simple machines which make salads? The latter — but the press release sounds better calling it a robot.

When kiosks were “in,” it would have been called a kiosk. Bots are “in” so it’s called that. It’s just marketing spin for a touchscreen vending machine. There’s one that cooks hot dogs to order. Is that a hot dog bot? (shaking head).

While it doesn’t look or feel much like a robot (vs. a vending machine) it’s a good solution to a fresh food problem the pandemic has created. I do wonder how this will handle hot foods however and if it really makes sense to have hot foods in such a confined space — I don’t know if you can do that and still maintain quality. For the sci-fi fans out there (especially Star Trek fans) this looks like the current-day implementation of a food replicator. Still it feels a bit too much like a typical vending machine, and I’m sure that’s why they named it Sally the robot!

Robotics and automation are the future. Retailers can either embrace it now or wait until they lose competitive advantage, point-of-difference, relevancy and cost efficiencies. The pandemic has forced the acceleration of a more digital world, home, office, and yes, retail environment — whether we like it or not.

Not all retailers are leaders though. Some (many) will try to modify existing practices to meet new minimum safety standards in food prep. Those that want to re-engage shoppers in a new and different way, with the reality that the world will be different post-Covid, will invest in new experiences that keep revenue — and the salad bar — flowing, safely and efficiently.

Robot salad bars are a short-term fix, but a slippery slope. When the virus is over, will all robots exit the supermarket and humans get their jobs back? Probably not. Robots may be the future, but that doesn’t mean I have to like it.

I’m all for sanitary food service, but robots at the salad bar seem like a solution looking for a problem. Wasn’t this challenge licked 118 years ago by the Horn & Hardart Automat (drop in a nickel, retrieve a slice of pie)?

"Robot salad bars are a short-term fix, but a slippery slope. When the virus is over, will all robots exit the supermarket and humans get their jobs back?"

"...the fact remains that the days of “open air” salad bars, olive bars, etc. may be behind us, at least for a while, and something has to replace them."