Chrome extension shows Goodwill to shoppers, not to Amazon or Walmart 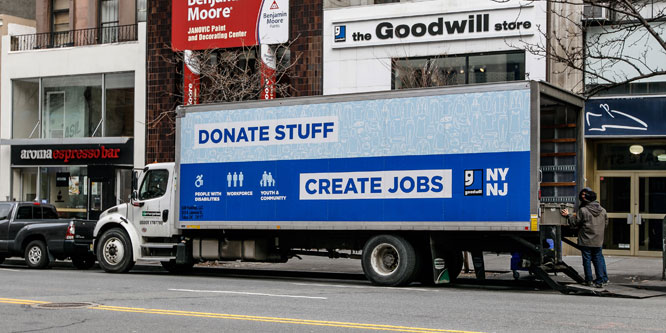 A new browser add-on will let visitors to Amazon or Walmart’s websites know if they can get a better deal on a second-hand version of the product they’re searching for at Goodwill.

Goodwill’s new Chrome extension, created in partnership with Price.com, pops up a browser alert if a product that shoppers are looking at on Amazon or Jet.com is also available on the Goodwill website, according to Bloomberg. The extension also provides a link allowing the customer to purchase the product from Goodwill. In its initial iteration, the extension will only search the inventory of Goodwill Industries of Greater New York and Northern New Jersey, which gets six million website visitors a month.

Bloomberg’s demo of the extension found the selection to be spotty, but the non-profit thrift store does foresee the extension someday searching the inventory of other Goodwill locations nationwide and thus providing more hits.

Such a strategy might seem to run the risk of hijacking sales not just from other e-commerce sites, but from Goodwill stores themselves. The chain, however, does not report being concerned about draining the good finds from its existing locations or discouraging customers from visiting the chain’s locations. Goodwill has more than 2,800 stores in the U.S. and Canada.

Even if the charity thrift store isn’t typically seen as competing with today’s tech and retail giants, Goodwill has made moves to revamp itself for the new retail landscape and the Millennial thrift shopper.

The non-profit chain began opening high-end vintage stores under the “Curated By Goodwill” moniker, as reported last year on Racked. The boutique store locations, in places like Manhattan’s Upper West Side, bring in products donated to other Goodwill locations that would appeal to high-end vintage shoppers, competing with urban mainstays like Beacon’s Closet.

Anecdotes across the internet also testify to increasing prices at the thrift store, once known for its bargain basement appeal. In fact, customer demands led the chain to spin off a new store concept, called Simply Goodwill, in 2017. Simply Goodwill harkens back to the no-frills, ultra-low-price thrifting experience the chain is known for.

DISCUSSION QUESTIONS: Will Goodwill’s Chrome extension significantly improve its online sales? Will there be blowback from the online leaders to prevent losing share because of such extensions?

Please practice The RetailWire Golden Rule when submitting your comments.
Braintrust
"I do expect that Walmart, Amazon, and others will respond with their own second hand strategy, either directly or in partnership."

"It’s an especially sound move for Goodwill as the brand has less affinity among younger demographics than the digital resale companies."

"This is a wake-up call from these companies as other price comparison extensions could become more of a competitive threat."

14 Comments on "Chrome extension shows Goodwill to shoppers, not to Amazon or Walmart"

I doubt that the Chrome extension will significantly increase online sales at Goodwill, but it won’t hurt. While there may be some cross-over shoppers, I suspect that Goodwill serves a slightly different demographic, and so I don’t think this will have a serious impact on the online leaders’ market share. That said, the battle for market share is intense, and I doubt the big players will be pleased with this development.

This Chrome extension is a brilliant move. It can only help it boost sales. Very creative of Goodwill to think outside of the box… In terms of grabbing more market share and mindshare of shoppers. I can’t see online retailers being in favor of the Goodwill Chrome extension.

Current growth in secondhand and resale products is huge, and much of that is coming from younger, internet-savvy shoppers. As such, this browser plugin makes sense as it taps into a trend. It’s an especially sound move for Goodwill as the brand has less affinity among younger demographics than the digital resale companies.

That said, its success will come down to execution, especially product availability. If alternatives aren’t frequently available I can see many deleting or disabling the extension.

Credit to Goodwill! There is a large and growing demographic of those willing to purchase something second hand. Amazon has been offering “used” versions of some items for quite a while and second hand/consignment has been growing in both e-commerce and brick-and-mortar. When you think about it much of eBay is second hand as well. Additionally, Goodwill has taken a clever approach, using a plugin that exposes the Goodwill offer when someone is shopping other very popular e-commerce sites. I do expect that Walmart, Amazon, and others will respond with their own second hand strategy, either directly or in partnership.

Very interesting concept and quite smart for the demographic (especially Walmart). To roll it out nationwide is going to be a big challenge, given the highly fluid and uncertain nature of their inventory (i.e. one-offs). All of these moves really put into question what business Goodwill is in. With zero inventory costs and and with charity tax status, they can become quite a competitor to low-end retail. And as reported a few years ago, their C-suite pays themselves crazy $$ to run the business – it’s why I stopped donating to them and switched to local shelters.

Brilliant move by the Goodwill team as they adapt and evolve to meet changing consumer shopping dynamics. Consumers, as we know, appreciate choice and adding this Chrome extension will extend the Goodwill team’s ability to extend beyond their website.

As a brand, Goodwill doesn’t quite resonate with Amazon or Walmart, however, if the company manages to provide excellent service and execute they can become another shopping option. It all comes down to execution. One failed or unsatisfactory experience could lead to customers deleting their Chrome extension.

Just by virtue of the fact that Goodwill has created a Chrome extension to give Goodwill customers the opportunity to shop digitally is pretty darn awesome! Specialty shops like “Curated by Goodwill” with plenty of locations to shop or drive-thru drop off donations demonstrate Goodwill has a customer-centric retail vision. Goodwill, the Target of non-profit retailers, leveraging donated goods to create thousands of jobs! Well done. Admirable.

Great move for Goodwill. Thrift store shoppers are more price conscious and having a plug-in that alerts them when second-hand items are available is a great way to keep up awareness and traffic as marketplaces like Amazon and Walmart grow. Its success will depend on how consistently they are able to show a better offer. If it’s few and far between customers will lose interest.

This may or may not work, and it may or may not have much of an impact on Goodwill’s revenue – I kind of doubt that either will happen. But, I really give them kudos for innovative thinking. They seem to be rewriting the rules for secondhand shops in a number of ways.

Clever move on Goodwill’s part to increase visibility and remind shoppers that second-hand options are available. The question is: how will it impact Goodwill’s lifeblood – donations?

Interesting idea, but perhaps a better approach would be for Goodwill to become a vendor on the Amazon and Walmart marketplaces.

Interesting technique. I think it will give them some press and hardcore shoppers. I don’t know how many people who install the extensions (I have had to clean up extensions on my Chrome browsers because of UI and other resource issues) just to get offers on Amazon.com On the other hand, the data they collect (have to read up on their privacy policy) on the extension could be very interesting for them.

Really interesting idea and a bold move from Goodwill. Plenty of people already use browser extensions for things like finding discount codes, so why not one for finding products? It also gets Goodwill in front of the huge traffic that Amazon and Walmart get, which may help drive visibility of the company’s own ecommerce offering. Goodwill being what it is I’m sure it won’t always have an option to offer, and there will be challenges around inventory that will be interesting to see how they tackle. I’m not sure it’s going to massively cut into the likes of Amazon’s sales, but it could start others off on a similar path.

Google will certainly get some pushback from Amazon and Walmart – even though this shouldn’t be a noticeable impact on their online sales. The number of items that Goodwill has available online will be a very small fraction of the items consumers shop for on Amazon and Walmart online. However, this is a wake-up call from these companies as other price comparison extensions could become more of a competitive threat.

The new Chrome extension will provide modest incremental sales for Goodwill, however, a potentially bigger benefit will be the increase brand awareness for Goodwill. It may spur more people to think of Goodwill as a retail option and this is a great way for socially conscious consumers to give back to individuals, families and their communities.

Braintrust
"I do expect that Walmart, Amazon, and others will respond with their own second hand strategy, either directly or in partnership."

"It’s an especially sound move for Goodwill as the brand has less affinity among younger demographics than the digital resale companies."

"This is a wake-up call from these companies as other price comparison extensions could become more of a competitive threat."