Consumers get some relief as inflation eases 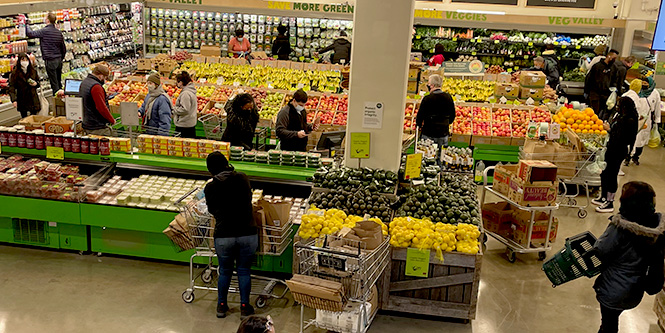 American consumers continued to spend as prices rose steadily higher from 2021 to June 2022. Will they keep up the shopping pace as prices go in the opposite direction?

The Consumer Price Index in December was 6.5 percent higher than in the same month in 2021, according to a report released yesterday by the Bureau of Labor Statistics. The annual price increase was the lowest going back to October 21.

Inflation, despite lower fuel prices, has remained stubbornly high in the face of repeated price interest rate hikes by the Federal Reserve Bank. Prices have been coming down, however, leading some to question whether the Fed will pump the brakes on further hikes or end them altogether.

The economy has remained strong as companies continue to add jobs, despite announced layoffs at financial, retail and technology firms, including Amazon.com, Bed Bath & Beyond, Cisco, DoorDash, Goldman Sachs, Meta, Salesforce and Twitter.

Grocery prices continue to be an issue for most Americans looking to stretch their disposable income. Food costs were up 0.3 percent in December as outbreaks of the avian flu in poultry farms across the country drove the price of eggs up 11.1 percent.

The Washington Post reports that the current outbreak is particularly worrying because it is far larger than one in 2015, which was described at the time by the United States Department of Agriculture as “arguably the most significant animal health event in U.S. history.”

Eggs are not the only category where product prices have outpaced the overall rate of inflation. Bread, cereal, rice were all up in December.

“What we’re seeing is that if you take the fresh food categories, commodities, things like proteins, things are starting to move. Chicken right now is more expensive, but beef is down. Fruit and vegetable is in pretty good shape,” Mr. McMillon said. “But dry groceries, consumables is where we’re seeing the most stubborn and persistent inflation, mid double-digit inflation. And we’re not hearing from our suppliers looking forward that’s going to come down soon.”

Some grocery retailers have begun to push back against suppliers by threatening to discontinue items where suppliers fail to make the business case for hikes.

DISCUSSION QUESTIONS: How might a further easing of inflation affect consumer spending? Should the retail industry be lobbying for the Federal Reserve to show restraint when it comes to further increases in the prime rate?

Please practice The RetailWire Golden Rule when submitting your comments.
Braintrust
"We’re going in the right direction, but the impacts of inflation are not yet over."

"Inflation is still measuring out at 6.5% so I am not sure that is anything to celebrate."

"Before we get too excited about food prices beginning to moderate, beware of rising home energy prices."

19 Comments on "Consumers get some relief as inflation eases"

Any easing of inflation is helpful. And while inflation remains stubbornly high year-over-year, the trend is positive. Given the pressure that the Federal Reserve has been facing over the past year, I doubt that any lobbying by the retail industry will change its course — especially now that inflation is starting to abate. We knew it was going to be a bumpy ride, and it is, but it’s also getting better.

With inflation volatility, retailers will need to remain agile to stay competitive. And that will be different, segment by segment. Retailers have every right to push back on suppliers who are trying to milk the inflation wave. Maybe some suppliers have paid too much attention to the tricks of the gas pump trade. I think the Fed should roll back the interest rates rather than stop the hike. They are putting a governor on the economy and stifling growth. I’m clearly not an economist, but taking the rates to three times what they were a year ago seems a bit too much.

Consumers have been very reactive to the rising prices in their day-to-day activities. Gas prices going down is good news for consumers — it’s something you can see every time you leave the house and have a general sense of what a good price is. Food is a bit more complicated — it will take some time to feel like the total grocery bill is going down and if consumers will fully be able to acknowledge that. I suspect the spend will continue to shift to discretionary categories like travel, beauty, and apparel.

As inflation eases (if it continues to ease), consumers will first pay off debt incurred over the holiday period. Then they will begin spending again.

Before we get too excited about food prices beginning to moderate, beware of rising home energy prices. San Diego Gas & Electric has announced massive spikes in natural gas costs coming on our January bills, and – despite our mild winters – if you believe the news and social media, people are already beginning to cut spending in other areas to heat their homes.

A fall in the inflation rate will be warmly welcomed — especially as the headline rate is now at its lowest for 13 months. However most consumers will stop short of celebrating as, despite the progress, prices are still rising and are up by 6.5 percent on a year-over-year basis and up by 13.9 percent compared to two years ago. Ultimately, this represents a serious erosion in the spending power of average households.

There is also still significant stickiness in essential categories like food, where inflation stands at 10.4 percent. Household bills will also rise, with electricity prices up by 14.3 percent. The sharp increase in the price of essentials makes inflation very difficult to avoid and means it continues to be seen as a major issue for most people.

We’re going in the right direction, but the impacts of inflation are not yet over.

I agree that lobbying by the retail industry is not likely to affect the Federal Reserve. Consumers continue to purchase the basics for the family even during inflation. They may have even purchased some fun, traditional food over the holidays. When inflation eases consumers are likely to purchase some more expensive items or “treats.”

Inflation is a double-whammy for retail. First it decreases consumer demand. And then it makes it more difficult to fill lower paying retail associate positions, as employees look for better paying positions outside the industry. For a lot of reasons we should all look forward to a more stable, less catastrophe-impacted economy.

Many of the contributors to the spike in inflation over the last year have been mitigated and I’m optimistic that things are going to improve. I think it’s still reasonable to be concerned about how COVID-19 might impact Chinese production in the next few months. But aside from that, producers and retailers have adjusted somewhat to the shocks from transportation issues and volatile pandemic demand. That said I’m not as optimistic that the gouging we’ve seen in many categories is going to go away.

Many of the commodity price indexes I’ve been tracking for our business have stabilized since summer, with the glaring exception of paperboard for packaging, which went up by 9-10 percent in just the last six months. Rigid paperboard setup boxes are up cumulatively 74 percent since the beginning of 2021. Consolidation of supply in the global paper industry has gone too far and affects all of us.

The comments from Walmart are telling. Higher grocery prices will continue to absorb dollars from discretionary categories. Spending during the holidays probably meant higher debt levels. That’s a further impediment to discretionary spending. Hate to say it, but I predict softer spending in at least the first two quarters of 2023.

In the short-term, easing of inflation will reduce the stress on middle-class pocketbooks across the country. Over the past year consumers have maintained a high spending rate, even in the face of inflation, driving down savings rates and increasing credit card debt. A reduction in prices won’t change spending that much, but should enable consumers to pay down debt and replace some lost savings.

Change in the prime rate is a more complex discussion; a higher interest rate increases return on savings while costing consumers on credit cards and mortgages. The impact of interest rate changes usually take longer and the effects are milder than consumers expect.

The key point of McMillon’s comments is that price inflation is moving from flexible categories like commodities, meats, and produce (perimeter items), to stickier center store categories, as well as other prices like rent and housing.

Lower inflation helps as long as price changes are in alignment. No doubt certain items have had a major range of price fluctuation. (Some retailers are practicing transparent pricing to make consumers feel better about the swings in prices.) As for the Fed changing rates, they are doing what they can to balance inflation, interest rates, and the volatile economy. Let’s hope they can get it right.

When it comes to inflation, lower is better and higher is worse. And when it comes to consumers we have to consider the full impact of inflation, i.e., housing costs, interest rates, utility costs, healthcare, etc. As history shows you can lobby the Fed all you want, but it usually doesn’t have much impact. After all, it’s their policies that are responsible for at least part of the current drop.

Consumers often feel the impact of inflation most when it affects meat, poultry and dairy. With the exception of eggs, these categories are holding steady. If inflation does ease, categories like wheat, rice and grains could potentially have the most impact on consumers spending. However, economic uncertainty is a wild card that can have near instant impact. Retailers and brands need to watch and plan carefully.

Inflation is still measuring out at 6.5% so I am not sure that is anything to celebrate. Gas and heating prices capture the media attention until Cardi B tweets something about lettuce (she is right!).

Inflation eases and people feel more “flush” and spending moves from necessities to more “discretionary” pursuits so that would be a good thing for companies in the non-discretionary categories.

I for one think the Federal Reserve should say mission accomplished and stop raising the prime rate. But I don’t have a degree in economics from MIT or Harvard, so I do not have the credibility to move markets….

“Prices have been coming down…” No George, with rare exceptions (like fuel) inflation is coming down … prices are the highest they’ve ever been.

As for that inflation, as it was heavily influenced by transitory factors — even if not quite as much as initially thought by some — we will continue to see moderation. Longer term, I think the challenge will not be so much restraining further rate increases as much as resisting eventual calls to cut them: today’s rates are more in line with historical norms, despite what those who exploited a decade of ZIR may tell you.

The real question about an easing of inflation will be the fate of store brands. Will their sales decline if inflation eases? We won’t know for quite a while because economists who I trust predict a recession in 2023.

Braintrust
"We’re going in the right direction, but the impacts of inflation are not yet over."

"Inflation is still measuring out at 6.5% so I am not sure that is anything to celebrate."

"Before we get too excited about food prices beginning to moderate, beware of rising home energy prices."