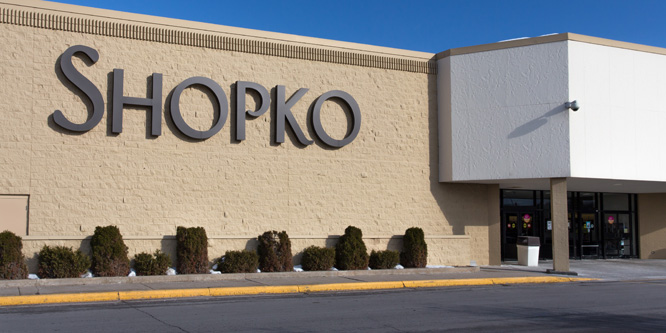 Like other retailers in recent years, Shopko blamed its trip to bankruptcy court in part on the shift away from brick-and-mortar to online selling, but it also cited challenges competing as a regional player.

The operator of 360 general merchandise and pharmacy stores located throughout the Midwest, Western and Pacific Northwest regions filed for bankruptcy protection in Nebraska on January 16. Given its remote locations, the general merchandiser stands out for carrying premium brands, including Nike and Adidas.

In an affidavit in bankruptcy court, Russell Steinhorst, Shopko’s CEO, wrote that the retailer’s poor performance in recent years that led to the filing was in part due to competition from online sellers, with Shopko having an “underdeveloped” online presence.

Mr. Steinhorst wrote, “Retail companies like Shopko, with a substantial physical footprint, bear higher expenses than web-based retailers and are heavily dependent on store traffic, which has decreased significantly as consumers increasingly shop online rather than in malls or shopping centers.”

He also cited increased traffic to national retailers, such as Walmart, Target and Kohl’s. The larger retailers, he wrote, can offer lower prices and “still bear the high operating expenses associated with brick-and-mortar retail.”

Finally, the consolidation in the pharmacy industry has led to a lack of pricing power for retail pharmacies of Shopko’s size. Mr. Steinhorst wrote, “Shopko lacks purchasing scale to purchase drugs at costs similar to large national pharmacy chains.”

Shopko has also been impacted by higher-than-average inventory costs due to a dispute with its primary pharmaceutical supplier, McKesson Corp.

A heavy debt load brought on by its leveraged buy-out that took it private in 2005 inhibited Shopko’s ability to restructure outside of bankruptcy. Underinvesting by its private-equity owner, Sun Capital, was seen by some as significant reason for Shopko’s challenges.

Some reports also cited competition from other national players, such as Dollar General, CVS and Walgreens, as well as strong regional rivals, including Blain’s Farm & Fleet and Tractor Supply.

In bankruptcy proceedings, Shopko plans to close 105 stores, sell its remaining pharmacy units and reorganize or find a buyer for its general merchandise stores.

INSTANT POLL: Has it become tougher for regional chains to compete against national retailers in recent years? Of all the reasons cited, which do you think was the biggest cause of Shopko’s slide into bankruptcy?

Please practice The RetailWire Golden Rule when submitting your comments.
Braintrust
"The middle of the road is where you find the roadkill of today’s retail."

"Shopko failed because it wouldn’t adapt to today’s retail customer’s needs. Adapt or fail should be the slogan every retailer lives by."

It’s always been tough for regional players, so I don’t think anything has changed recently or specifically for them. The Shopko bankruptcy doesn’t seem like anything new. The slow move to online is a sad excuse, since online has been growing for many years – didn’t Shopko management think this was a real trend? Though an underdeveloped online presence and declining store traffic were the key reasons cited for their demise, I suspect that good, old-fashioned business execution probably played the biggest role. Naturally, failing CEOs rarely blame themselves or their own execution for the problems.

While I have some sympathy with the reasons given, they are all dynamics which have been in play for a very long time. Shopko should have found ways of mitigating or negating them. If you don’t have pricing power on your side, you better make sure that other aspects of the proposition – like store environment, range, service, etc. – are compelling. The blunt truth is that Shopko did not make an enormous effort on any of these things, nor did it push online when it should have. That’s why it is in difficulty.

Mediocracy. The middle of the road is where you find the roadkill of today’s retail. Shopko was average in most areas. Definitely not the worst, but it certainly didn’t stand out as different and relevant for today’s customers. An “underdeveloped” online presence is more than a chink in your armor, it is the virtual shelf and endless aisle that customers now expect as part of their end-to-end shopping experience. Today’s customers keep moving the goal posts. Shopko was trying to compete with yesterday’s horse-and-buggy retail model.

It’s hard to lay the blame for Shopko’s bankruptcy on one explanation. (Disclosure: I’m a former Kohl’s colleague and longtime friend of Shopko’s former CEO Paul Jones.) Did the private equity debt load eventually became too much to bear? Was it the acquisition of hundreds of Pamida stores and the decision to place a big bet on small-town retailing? Or was it the slow pace of e-commerce development compared to its competitors?

If I had to pick one reason, it would be the reach of stronger competitors in better locations. An example in my own backyard: Shopko’s store in the Milwaukee suburb of Grafton, Wisconsin (in the “old” shopping district) probably lost share when a power center opened three miles closer to the freeway — complete with Target, Meijer, Costco, Kohl’s and other big box stores. It’s hard to stay relevant and competitive under these kinds of circumstances.

The fact that Shopko survived the onslaught of Walmart, then Target and Kohl’s has always been a subject of fascination for me. I’ve followed them and talked about them forever. Way, way back in the day, I worked for the company that ran their shoe department. All our other lessors were killed off. Shopko survived. The fact that it survived Walmart (especially!), Target and Kohl’s (and the bankruptcy of Payless) was pretty spectacular. And the company was profitable when it was snapped off the public market. Since the company had so much good will, and survived despite all odds until now, tells me that the P/E owners did not provide the funds to continue building the brand. From where I sit, the P/E took something special and pretty much milked it until there wasn’t much left. This is sad. It’s easy to say that all the other regional chains died but the real question and thing to study is, how did Shopko survive this long and what lessons can we learn from that? Personally, I… Read more »
8
|
0
-   Share

Well said. Look at the competitive pressures they did survive. Customers don’t see debt. They also don’t see the on-floor evolutionary attributes that debt stands in the way of. “Regional” should have been an advantage, not an excuse.

It’s much more likely that what doomed Shopko was a decline in popularity of the mall experience, and a lack of differentiation. Did management ever ask (objectively) “what, if anything, is different about the Shopko experience?”

As a regional retailer, you have to look at your strengths and how you can compete against other national retailers and online. To just say that you failed because of e-commerce reducing traffic and national retailers getting better prices shows you did not manage your business that well. However, in this case, there is one justifiable additional problem — lack of investment by the private equity company.

To really compete, regional retailers must be very efficient, have great supply chains, knowledge of what sells and how local items can differentiate the stores. The lack of investment in modern IT solutions that can help the retailer be more focused, smarter and efficient allowing them to mitigate the advantages held by national retailers will bring the regional retailer down every time.

First, online sales get the buzz. Brick-and-mortar gets the dollars. E-commerce will remain a minority of total retail sales, somewhere between 10 and 15 percent of total. The vast majority of sales, over 85 percent, will continue to take place in brick-and-mortar stores.
Second, regional players need to leverage their distinct knowledge of their consumer’s needs and provide unique products, services and experiences tailored to that audience. It’s about localized choice, cost and convenience. Finally, as with all other retailers, regional players must have the foresight, fortitude and fearlessness to disrupt their own identity and legacy models.

Shopko failed because it wouldn’t adapt to today’s retail customer’s needs. Adapt or fail should be the slogan every retailer lives by. Poor inventory management, and failure to compete on the Internet are both excellent reasons to for any retailer to use but in reality, it is just another business that cannot adapt and eventually perishes. The story is the same over the years, only the reasons change for each bankruptcy, whether they are regional or national.

I worked for Shopko from the mid ’80s through the early ’90s. During my time there, they were owned by Supervalu and then went public. It’s too bad that the Supervalu/Shopko relationship didn’t work out. Supervalu had a lot to offer Shopko both logistically and technologically because Supervalu was much further advanced. During its time with Supervalu, Shopko opened two hypermarket stores called TwinValu, one in 1989 and one in 1990. Supervalu already had the grocery distribution system in place which would have given Shopko an edge over Walmart and Target back then, if they just would have continued to pursue it. Unfortunately, Shopko felt that groceries just lowered their margins and dropped the concept. Once Shopko went public, the focus was on looking good on paper and employees, stores and customers mattered less. The private equity owners just haven’t seemed interested in investing, renovating or relocating existing stores when needed. Where does Shopko go from here? Right now, it looks like the same path as Sears — a slow death. It appears Sun Capital… Read more »
2
|
0
-   Share

Braintrust
"The middle of the road is where you find the roadkill of today’s retail."

"Shopko failed because it wouldn’t adapt to today’s retail customer’s needs. Adapt or fail should be the slogan every retailer lives by."