Did retailers miss a marketing opportunity by sitting out the World Cup broadcasts? 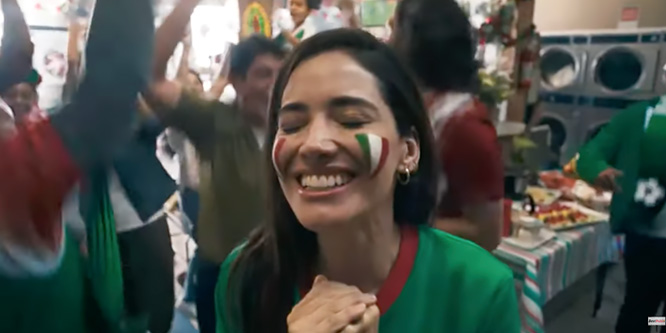 The World Cup — the quadrennial tournament of thirty-two men’s national soccer (world football or futbol) teams — is breaking TV audience records around the world and here at home. Coverage of the USA’s match with England attracted nearly 20 million viewers, making it the most watched men’s soccer match ever. Fans have been tuning in to watch the drama of elite tournament play, see the sport’s most exciting stars and to support the USA and other countries’ national teams.

Like other major sporting events, advertising campaigns are part of the viewing experience and provide a great way to raise brand awareness and to promote products and services.

Otherwise, it’s been a missed opportunity for the major players in the industry. Only one retailer, Walmart, has created a meaningful, themed campaign to run during the month-long World Cup, which ends Dec. 18.

Walmart’s “Share the Passion” commercial  promotes its Walmart+ subscription service. The spot features the retailer’s wide product selection, free delivery and InHome delivery service. It is both engaging and effective because it showcases:

Soccer is the fastest-growing major sport in the U.S. and nearly a third of Americans call themselves fans. Walmart showed up for the match, but other retailers have largely missed out on a chance to reach consumers who need supplies for watch parties or other social events, or those who wanted to buy FIFA, team or sporting apparel to join in the fun now or to give as holiday gifts.

DISCUSSION QUESTIONS: Did Walmart gain a marketing advantage running commercials during World Cup broadcasts? Do you agree that the World Cup has largely been a missed marketing opportunity for U.S. retailers?

"This is a once in four years opportunity to appear relevant to a whole group of people that may not be in the Super Bowl subset..."

"The audience for the final is over two billion — ten times the size of the Super Bowl."

17 Comments on "Did retailers miss a marketing opportunity by sitting out the World Cup broadcasts?"

While I do think U.S. brands missed marketing opportunities by passing on the World Cup, I wonder how many decided not to participate because of the human rights record of the host country? Perhaps more than a few companies made the decision to pass based on metrics beyond the bottom line? One can hope!

Dave, indeed, one can hope. If we look at the metrics for the 2018 cup, it would suggest that they missed it, not for human rights concerns.

Agreed, Gene, but I try to remain optimistic…

It’s OK. They are not going to miss that opportunity again. The sport has grown significantly in the U.S. and continues to do so. Agencies and retailers were watching and they will be among the sponsors of the World Cup and more immediate world class tournaments like Champions League, Europa Cup, Copa Libertadores and more.

Live sports broadcasts are a marketing jackpot. Placing ads the during World Cup gave Walmart an edge, as it operates in 24 countries and “the beautiful game” unites international audiences.

In 2026, expect more retailers to seize global attention as the World Cup comes to North America.

Watching many of the matches here in NYC, all of the bars/pubs were absolutely packed and, in some cases, had lines to get in them. The diversity of the World Cup audience is unmatched and Walmart deserves credit for calling the right play on this. The other factor is unlike American football, the commercials are run during halftime only so they do tend to be watched given that commercials can be way too frequent on our football games.

I, in NYC, experience the phenomena. The bars were more packed than the Saturday and Sunday presentations of American football.

Or the bars were filled with people looking to be distracted with weekday games in the daytime!

I don’t know whether Walmart had an exclusive sponsorship deal with FIFA (shutting out its competitors), but it was money well spent. Audiences were huge and the fan following will only grow before the next World Cup. Amazon may have been a player, too, but other brick-and-mortar stores — not so much.

Side observation: It’s refreshing to see a broadcast sporting event that allows 45+ minutes of action to unfold without commercial interruption. As other major sports struggle with lengthy game times and constant break-ins for ads, this is a breath of fresh air.

My husband works in the industry of sponsorships for sports and entertainment and we had this very conversation. Running ads and sponsorships during “world” playoffs and tournaments can be tricky, unless your brand can cover the globe or the ad platform can deliver targeted ads during specific times you know there would be high viewership of your targeted audience. So, for retailers such as Walmart or Amazon, blanketing the tournament can give them an edge.

I bet even with the misses, for global brands, it is more efficient than the Super Bowl.

Walmart is a world brand. International is where they are targeting growth. The domestic business is mature. It makes ultimate sense. There is no place where an advertiser can get a bigger audience.

In the U.S., everyone gets excited about the Super Bowl. They do it for a good reason. The Super Bowl delivers an audience of over 200 million people. Advertisers are willing to pay outrageous sums to participate.

When it comes to the World Cup, their reaction is ho-hum with no good reason. The tournament delivers an audience of almost four billion. The audience for the final is over two billion — ten times the size of the Super Bowl.

Every international brand or brand with global aspirations should participate.

First question first. Yes, Walmart gained a marketing advantage advertising during the world cup. Second question. How is not advertising during the most important athletic competition in the world a good idea and not a badly missed opportunity? Americans don’t understand the popularity of “football” – we don’t even call it by its correct name – let alone the fanatic loyalty of its fans. Put me down in the “bad miss” column.

I am surprised more marketers are reserving their creative stretches for the Super Bowl. This is a once in four years opportunity to appear relevant to a whole group of people that may not be in the Super Bowl subset, and it takes the same approach — run a brand/lifestyle campaign that positions a core value of your product in connection with the athletes playing the game. For example, if you work for Dunkin’, you could run a creative about “running” that shows how the average person fueled by your product connects to the world’s greatest athletes. Another missed opportunity here is to be an early mover and offer “collectibles” related to the FIFA athletes. This does not have to be NFTs, auctioned and purchased in crypto, but rather an “NFT-mimic” purchased in brand currency (loyalty and reward points) that still feels exclusive, scarce, and owned by the consumer. This would work for any retailer whose products have no connection to soccer and could be done at a relatively low cost since the product is… Read more »
4
|
0
-   Share

It was fun to see World Cup become a bit of an event in the US — a good reminder of how much mixing there is in the world. Diversity is here to stay.

Sitting out, though, is not a miss — unless a retailer had a specific opportunity which opened up to a World Cup audience.

We must always remember advertising merely to put ads in front of “lots of people” isn’t going to succeed. Advertising for a reason matters far more.

Walmart is a global brand and most of us shop there, so advantage WM. And yes, with the increased popularity of Soccer (futbol?) here in the states, a big miss. I am guessing that ad prices were/are MUCH lower than they are for the Super Bowl, so better value for money too.

Kudos to Walmart, seizing the meteoric growth in this sport from both a participation and new fans’ perspectives. Ironically, these record breaking viewing numbers occurred during odd hours of matches & in the middle of the American football season. I’m surprised that other retailers kicked the ball wide on this one.

"This is a once in four years opportunity to appear relevant to a whole group of people that may not be in the Super Bowl subset..."

"The audience for the final is over two billion — ten times the size of the Super Bowl."