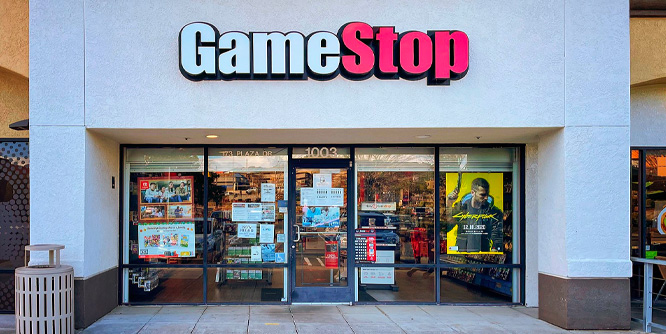 GameStop’s c-suite shakeup is almost complete. The retailer is now looking to replace George Sherman after having replaced many of the current CEO’s top lieutenants in recent months.

Reuters and The Wall Street Journal report that GameStop’s move is being driven by Ryan Cohen, an activist investor who has been nominated to become the retailer’s new chairman of the board following the company’s annual meeting of stockholders in June.

Mr. Cohen, a co-founder and former CEO of Chewy, has been leading a sweep of the executive ranks at GameStop while taking leadership of a committee charged with driving digital transformation at the chain. He is also, according to the reports, in charge of the effort to replace Mr. Sherman, who has been CEO for two years. Mr. Cohen is not said to be interested in taking the job himself.

GameStop, according to the Journal’s reporting, is working with an executive search firm to identify and speak with executives that have experience in technology and video gaming. Brick and mortar retail experience, it seems, is lower down on the priority list for the new CEO.

Mr. Cohen has been responsible for bringing in veterans from Amazon.com, Chewy and QVC in recent months as he seeks to make the retailer into one that “delights gamers and delivers exceptional digital experiences” rather than focusing “on its brick-and-mortar footprint and [stumbling] around in the online ecosystem.”

GameStop, which has seen its stock go on a rollercoaster ride in recent months, posted a 6.5 percent gain in same-store sales during the fourth quarter as the retailer’s online sales jumped 175 percent.

Fourth quarter gains, however, were not enough to keep GameStop from posting a 9.5 percent drop in its same-store numbers as stores across the world were forced to close due to the novel coronavirus pandemic. This situation and the shift by consumers to get their gaming content via digital channels are the factors driving the moves currently being made under Mr. Cohen’s direction.

The retailer’s preliminary results for the first nine weeks of its 2021 fiscal year show sales up 11 percent over last year when many stores were closed or limited in their capacity to accept shoppers.

DISCUSSION QUESTIONS: Do you agree with the direction that Ryan Cohen is taking with GameStop? What role do you think the chain’s stores will play going forward?

Please practice The RetailWire Golden Rule when submitting your comments.
Braintrust
"GameStop needs to understand who their customers actually are, what THEY want and how they spend their gaming dollars."

"Going by how the world is going for the gaming industry, the answer is NO. Digital and gaming experience will be key."

"I think a CEO versed in gaming and tech with an open mind can hire an innovative leader to create a compelling 360 go-to-market strategy in which stores can play a role."

GameStop desperately needs to pivot away from its traditional approach to retailing, but there’s still a place for their physical stores. I do agree that a substantially more focused digital strategy is the key to their long term survival, but I think it would be risky to hire a CEO that has little or no experience in physical retailing.

I am bullish on GameStop. There are a lot of structural advantages. There is a level of brand equity. Their physical store space is small format and generic. With the right kind of positioning and investments, it can be turned around.

Is there still brand equity with GameStop? Sure, with the “GME Stonks” memes there’s been a resurgence in talk for the GameStop days coming out of the woodwork, but for plenty of Millennials such as myself, GameStop’s reputation is not good. Before the Wall Street Bets madness, the memes were more about how little GameStop would offer on trade-in value for games.

I’m very suspicious of GameStop’s reputation among video game buyers. There might be nostalgia for what GameStop was circa 2005, but will that actually lead to consumers coming back? Whoever leads GameStop into this pivot won’t be able to ignore the negative connotations that they’ve earned over the years, and need to recognize that prominence = positive brand sentiment.

I can’t see why anyone would disagree with where Cohen is going, GameStop was DOA the past few years. Shaking things up so it doesn’t become another RadioShack, Circuit City or Toys “R” Us is necessary.

I think stores can play a role. My young boys love going into the stores whenever they see one to shop and we tend to buy non-game merchandise on occasion. It is still a delight to see merchandise all together and be able to have some serendipity. Even at their ages (11 and eight) there is a place for physical stores.

I don’t think the CEO needs to have stores experience. I think a CEO versed in gaming and tech with an open mind can hire an innovative leader to create a compelling 360 go-to-market strategy in which stores can play a role. As always, the trick will be keeping merchandise and/or experience to get someone off their couch.

Personally, I believe GameStop needs some physical anchors (call them communities). GameStop’s traditional approach to physical stores is certainly not the answer, however swinging the pendulum too far the opposite way without thoughtful brick-and-mortar presence may be a real missed opportunity.

A community? Perhaps. When I think of “GameStop”, I think of a place to stop and play the game, not a place to buy anything. In China, there are many of these facilities where gamers come and play each other. They always seem to be packed.

Your reference to China was precisely what I was thinking about as I jotted this thought, Gene. Despite the virtual nature of the games, these enthusiasts want to get together and share their passion. This is not about “transactions” as much as it is “interactions.”

The gaming market made the transition to digital a while ago. The major gaming platforms have transitioned to downloadable content, in most cases bypassing retailers. I think the direction that Mr. Cohen is taking is the right one. The company needs strategic direction and someone who can effectively drive the changes needed to focus on a digital experience. This has to come from the CEO. I don’t advocate they close their brick-and-mortar operations tomorrow. I do believe that aspect of the business can be managed by an executive who can focus on operation and keep the lights on for the time being, but it will not be the growth vehicle for the company.

The new CEO needs to be an expert in gaming/tech/digital. And some other C-suite role can be the physical retail expert. I’m not a gamer, but my sense is that the customer relationship in gaming is different than apparel or groceries or home improvement. Sounds to me like they are on exactly the right track in the way they are conducting the search.

A couple of my grandsons are gamers and one even has a ranking in the game he plays. Their hardware (wow, talk about bells and whistles) is all ordered online. The games and upgrades are downloaded online. I doubt either of them have ever been to a GameStop.

What hardware can one get at GameStop that you can’t get online with a greater selection? When they buy their software and upgrades, they buy them exclusively online.

Who is GameStop’s target audience? Is it the serious gamer or the occasional/ neophyte gamer? If it is the former, do they need stores at all? If it is the latter, is there enough business to support brick-and-mortar?

GameStop needs to understand who their customers actually are, what THEY want and how they spend their gaming dollars. Once that is clearly understood, then and only then should they determine what role their physical stores need to play in order to relevantly connect with their specific audience. Using “design thinking” principles will go a long way to achieving success.

In milking and closing them perhaps. Ryan Cohen knows the future revenue streams for gaming are all digital — and it is called GameStop.

Going by how the world is going for the gaming industry, the answer is NO. Digital and gaming experience will be key. Having said that, the current GameStop store experience is terrible – with products packed on shelves and the need for a store associate to even find the product you are looking for. There is a long way for them to go to re-imagine the store as a gaming center. They can really host e-tournaments, have customers try new versions of the games, etc. Also, even with all the talk of digital transformation, I really don’t know how they will re-capture their single most important customer trip mission — i.e. swapping games on a disk. It is still interesting though to see how this will play out.

Having a physical store selling games to the digital native generation is a perfect recipe for going Blockbuster. They need to Netflix the business model and change the role of stores to drive experience. Kids can come in and play games in an environment equipped with professional paraphernalia, learn tricks and possibly buy consoles.

GameStop’s transformation should be digitally-led with stores playing a supporting role. A smart CEO sets direction and forms a team with the right skills to execute.

Something I haven’t seen discussed is the retail-OEM relationship in digital, and how it’s gearing to strangle GameStop’s ability to pivot. If the market continues to move towards digital video games, GameStop won’t be able to compete in its traditional space, digital or physical. Both video game publishers (EA, Ubisoft) and platform providers (Xbox, Sony, Valve, Epic) are competing to capture a bigger slice of margins by selling digital directly to consumers. When video games were primarily physical, OEMs had little say in the actual retailing of the games. But with digital, GameStop has practically zero reason to exist under its current model. Why would I, as a consumer, go to GameStop’s website for a video game, when Steam offers the game directly from indie publishers for $20, and Xbox offers a Game Pass subscription service for AAA titles? If GameStop continues to exist as a going concern, I agree with the panelists that there needs to be a radical shift in their business model. This is not a simple pivot to digital – it… Read more »
2
|
0
-   Share

Here’s the challenge for Cohen: gaming software will become more and more direct to consumer, so where is the retailer in the middle of this? I think GS will need to think about the non-digital side just as much — for 5500 stores almost 42% of their 2019 sales was in hardware and accessories and another 13% in collectibles. This idea of moving to digital doesn’t make sense for them.

What they need is partnership skills, not digital skills. As companies like Mojang(Msft), Activision, Capcom are updating games through internet connections and Steam has picked up. The console still continues to evolve in 5-7 year cycles and being the enabler with sponsored tournaments, localized collaborative events and added services will be key. GS can be the physical footprint and glue to the gaming industry — an opportunity for gamers to collaborate.

Braintrust
"GameStop needs to understand who their customers actually are, what THEY want and how they spend their gaming dollars."

"Going by how the world is going for the gaming industry, the answer is NO. Digital and gaming experience will be key."

"I think a CEO versed in gaming and tech with an open mind can hire an innovative leader to create a compelling 360 go-to-market strategy in which stores can play a role."