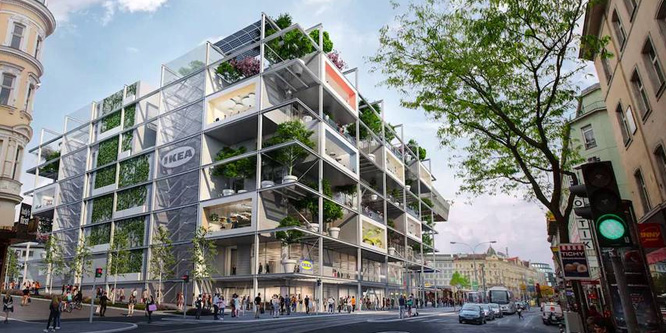 IKEA has done a lot of experimenting with moving away from its iconic, labyrinthine big box store format to make its furniture shopping experience fit with the lifestyle of today’s city dweller. Now the chain is opening a store in the E.U. that will bet big on serving a customer base of pedestrians, cyclists and public transportation commuters as the store will have no place to park.

The store in Vienna, Austria, which connects directly to the city’s subway station, promises that all items too big to carry will be home delivered within 24 hours, according to an article on urban design blog Treehugger. The store will nevertheless be a large one, consisting of several floors and displaying the entire IKEA range. There are some additional contemporary design features as well, including greenery on all facade surfaces and a publicly accessible roof terrace.

Its announcement of the parking lot-free location comes two years after IKEA began implementing its urban strategy, which has focused on building stores that are smaller and geared toward life in cities with a greater focus on delivery and related services.

The “green” elements of the store design, along with a setup that empowers customers to shop without a car, are also in keeping with the chain’s new environmental stance. IKEA has a comprehensive plan to reduce its carbon footprint that will change every aspect of its business, including how it designs its products (which are often thought of as disposable), according to Fast Company. The chain plans to be “climate positive” by the year 2030.

Urban stores that depend on home delivery have begun growing in popularity in other retail verticals as well. Nordstrom, for instance, launched its Nordstrom Local concept in 2017. The showroom carries no inventory for immediate purchase. The chain has since increased the concept’s footprint, adding a few new locations in Manhattan last year.

DISCUSSION QUESTIONS: Would it make sense for IKEA to open stores in U.S. cities that have no parking lots? Do you see more retailers opening concepts that rely on shipping items ordered in stores to the homes of customers?

Please practice The RetailWire Golden Rule when submitting your comments.
Braintrust
"Maybe there could be an intermediate format that would still offer the best of this format and the best of the 300,000 square foot format?"

"Presuming that there’s quality research behind this, it makes sense to me. Parking lots/decks are major expenses and lots are a real blight in cities."

"I get that IKEA is trying to help the environment, and I applaud that, but that’s not how people shop here. Why mess with success?"

I love this concept from IKEA. In another discussion article on RetailWire today, we discuss the escalating importance of convenience, and this delivery-model showroom from IKEA is certainly in keeping with the convenience theme. If they include product assembly in the delivery program, then I am all in!

IKEA sells a lot more than furniture, it sells home decor, accessories and grocery items. I can’t speak for what goes on in other countries but I can tell you that here in the U.S. people still drive. Maybe not in big cities, but certainly in the suburbs.

Consumers go to IKEA because we can take what we buy home with us that day. You can’t get near the IKEA closest to my house, especially on weekends, because the parking lot is always full to capacity. I get that IKEA is trying to help the environment, and I applaud that, but that’s not how people shop here. Why mess with success?

We have a new IKEA not far from where I am currently in NYC. There are no parking spaces. But why do you need them? They will deliver everything you buy.

Before we had IKEA in the city, we bought an IKEA kitchen in NJ. We rented a car (I haven’t owned a car for 15 years, yea!) drove out and picked out the components. They delivered everything, from the smallest to the largest.

In Manhattan this is not a new phenomena. It seems everybody delivers and has as long as I have lived here.

This is definitely an interesting format — it seems a lot easier to shop and like a better option for urban areas, but as Georganne mentioned, this is not how the suburban shopper shops IKEA. The IKEA nearest to me is packed towards the end of the week and all weekend. Maybe there could be an intermediate format that would still offer the best of this format and the best of the 300,000 square foot format?

Good move. This certainly opens up possibilities in the dense downtown areas in the U.S. IKEA could set stores up to be see and select, letting customers pick up from another IKEA near home or get product shipped. Delivery could be free at some threshold. In addition, category assortment could be specific to such location, focusing on large items that will be delivered or shipped anyways.

I too love this concept. The multi-generational return to urban cores makes this type of store a great fit for U.S. metro areas. As Baby Boomers retire they don’t want to have to lug around big, heavy boxes. Especially if they can get delivery and set-up. Young generations want the convenience without the sweat and without driving to the store. I see this as a win-win for all parties.

If IKEA (and any other retailer) can consistently deliver as promised, the urban stores can thrive without parking lots or garages. As pointed out in another RetailWire discussion today, trends are changing. Today’s labor force wants to live in urban areas, ditch the automobile, walk or take public transportation. That all spells out that even retailers of furniture can do business in urban areas and everybody (the consumer, the retailer, and the environment) wins.

Presuming that there’s quality research behind this, it makes sense to me. Parking lots/decks are major expenses and lots are a real blight in cities. Consumers are being offered options, so it’s worth a real-world try.

“(A)ll items too big to carry will be home delivered within 24 hours.” This of course is what lies at the end of the asterisk attached to the “No Parking” claim. So the real question, here, is whether/not this — adding a delivery component — represents a fundamental change to IKEA’s business model. I would argue it is, at least, a big one. We’ll just have to see how the first few test stores work out (and without seeming a chauvinist, I’ll point out that what works in Vienna, may not work in Boston … let alone Plano, TX).

Will be interesting. With a bit of planning by the consumer this should work. (For me it’s a Saturday pick up, Sunday assembly.)

For urban customers for whom a suburban store isn’t practical without renting a car, this should also be good. For those that practice IWWIWWIWI (google it…) this may be a challenge. Ideally the locations that open without parking will have plenty of non drivers in the catchment area.

I think this makes sense because of the convenience factor, some people want to shop close to home or online rather than drive out from urban centers. Given a lot of IKEA’s target audience is small home in urban areas, with a proper delivery network, a location without parking on top of a transit village should work well

Braintrust
"Maybe there could be an intermediate format that would still offer the best of this format and the best of the 300,000 square foot format?"

"Presuming that there’s quality research behind this, it makes sense to me. Parking lots/decks are major expenses and lots are a real blight in cities."

"I get that IKEA is trying to help the environment, and I applaud that, but that’s not how people shop here. Why mess with success?"