Does Walmart need to keep Jet.com around? 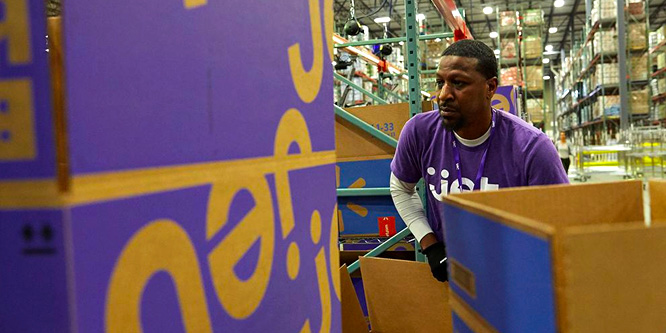 When Walmart spent more than $3 billion to buy Jet.com in 2016, the conventional wisdom was that the purchase was more about acquiring the talent behind the e-tailer than the site itself. Over the past year-and-a-half, industry watchers have kept an eye on Jet to see if Walmart remains committed to the site. A recent Bloomberg report raises questions on that very subject.

Jet’s traffic though the first three months of 2018 is down significantly vs. the same time frame last year, according to research by SimilarWeb. The site’s 60 percent year-over-year decline in March coincided with a corporate decision by Walmart to invest more in marketing Walmart.com while cutting support for Jet. Traffic to Walmart’s main site was up five percent last month.

“So long as Walmart’s numbers are strong it doesn’t matter what happens to Jet,” Sucharita Kodali, an analyst at Forrester Research, told Bloomberg. “This makes it easy to sunset Jet and focus on Walmart. I’m not sure, honestly, why Jet is even still around.”

Jet spokesperson Meredith Klein took issue with the inference taken from the SimilarWeb data, pointing out that the site’s strategy has focused on investing in urban markets where it has continued to increase its numbers of new customers and increased the length of the average visit, as well.

“Jet.com complements Walmart.com nicely. Walmart.com, including online grocery, is and has been the key driver of our ecommerce growth and that will continue,” said Mr. McMillon (via Seeking Alpha). “The Jet brand over indexed with higher-income, urban, millennial customers when we made the acquisition, and we intend to build on that strength going forward.”

Walmart’s CEO added, “The cost to acquire a new customer on a nationwide basis is cheaper with the Walmart brand so we’ve been investing more in Walmart.com on a national basis and reducing marketing investment in Jet, except in certain urban markets.”

DISCUSSION QUESTION: What role, if any, do you see Jet.com filling within Walmart’s business portfolio going forward? Do you foresee Walmart.com being able to appeal to young, urban consumers in cities such as New York or San Francisco in the future?

Please practice The RetailWire Golden Rule when submitting your comments.
Braintrust
"Jet.com serves as an entry point to customers Walmart frankly doesn’t attract. Will it be around 5 years from now? That’s anyone’s guess..."

"...it was never a forgone conclusion that Jet.com would be leading Walmart’s online efforts in the long-term."

"Walmart is building an online house of brands in a shrewd power play intended to broaden its appeal to younger, more upscale shoppers in cities."

14 Comments on "Does Walmart need to keep Jet.com around?"

It’s not surprising that Jet.com is taking a back seat to Walmart.com. Part of what Walmart acquired in Jet.com was a team with knowledge and knowhow that Walmart did not possess, and I expect that the Jet.com team will continue to do just that. However, it was never a forgone conclusion that Jet.com would be leading Walmart’s online efforts in the long-term.

While the Walmart.com name may not have the cool cachet as Jet.com may with some consumers, ultimately consumer acceptance will come down to the user experience, product mix and service features it offers.

Jet.com fills a demographic niche for Walmart — Millennials in urban areas. Over time, it makes sense to keep the Jet brand alive if Walmart is prepared to back it with advertising, if its infrastructure can be seamlessly merged with that of Walmart, and if Walmart.com continues to grow. Walmart can also use Jet as a test market for things it would like to do with its own site, without fear of startling Walmart shareholders.

Jet.com is well positioned within younger and urban consumers and thus complements Walmart, which has less of appeal for these audiences. Jet should be positioned as more techie, advanced, trendy, updated retailer that caters to the needs of these audiences. With this positioning it would create value for Walmart going forward

It makes sense that Walmart would want their brand to dominate in e-commerce. That said, if Jet.com has an advantage in the urban market and Walmart recognizes that, then for now, Jet.com will continue to penetrate that market until such time that Walmart can figure out how to take over that business as well.

Brand recognition is essential, and Walmart knows that their name must always take the lead for them to maintain a strong presence in the marketplace. So eventually, I would see Jet.com going away as Walmart continues to take over their e-commerce business.

There are two statements in this discussion that, I believe, answer the question. One statement is the obvious — Walmart acquired e-tailer talent almost overnight and I suspect most of those people are still gainfully employed, even if not necessarily supporting Jet.com any longer.

The second is the acquisition of a long Jet.com customer list, maybe including consumers who might not otherwise have been Walmart customers, and whom Walmart can now reach directly and try to steer them in the direction of Walmart, their omnichannel retailer. As some have said, maybe it doesn’t matter what happens to Jet.com, the name. Nobody cares what happened to Kinkos when FedEx took it in.

Excellent points Bob. The proof is in the pudding as they say. Try shopping Jet.com — it is a navigation mess! Try searching Jet.com — 100s of results to sort through. I visited Jet.com in NJ last year, anecdotally speaking, the focus was Walmart.

Jet.com serves as an entry point to customers Walmart frankly doesn’t attract. Will it be around 5 years from now? That’s anyone’s guess but for now, Walmart should seize this opportunity to learn everything about the consumers who are loyal to Jet.com and integrate those insights into its overall strategy.

Jet.com along with the other recent Walmart digital native acquisitions, including Bonobos, Modcloth, and others, represent the next wave of digital first, and innovation leadership for the company. While the Walmart.com name will most certainly dominate from a branding perspective, the innovation, fresh strategies, agility, and creativity for the company lie within Walmart’s very diverse digital first portfolio of brands.

While Jet.com brand, does indeed have a marketplace recognition, ultimately you are engaging with the Walmart brand. Consumers will be more than happy to remain loyal to the Walmart brand, if all the seamlessness, personalization, vast assortments, endless aisle capabilities, omnichannel and innovations are embedded throughout the organization, regardless of which brand name you are engaging with.

Talk of getting rid of Jet.com arises from a misunderstanding of how Walmart is using the brand.

As a stand-alone entity, Jet.com naturally wanted to attract as many customers as it could. Marketing spend reflected this. Under Walmart, Jet.com is a more focused entity which targets specific consumers (mainly younger, urban shoppers) that Walmart finds it hard to reach.

I don’t see Jet.com as either under threat or as useless. However, its role and purpose have changed, and will likely to continue to evolve under Walmart as it becomes a more seamless part of Walmart’s proposition.

Should they? Yes, Walmart should keep the Jet.com property around. The challenge is the branding, consumer connotation around Walmart.com has it destined to live in the category of “Amazon Lite.” This stands in direct conflict with a clear portfolio strategy they’ve taken with recent acquisitions.

Will they? If anything, I suspect they may double-down on building a new brand. Understanding how concrete the current consumer perception is of Walmart.com — to build something that matches the “curated” strategy with the Modcloth, Bonobos, etc. acquisitions, they may be best to create some new branding around (maybe “Walmart [X]”) for the collective online portfolio. Short of that, I do think the individual brands continue to exist.

Two questions need to be asked and answered:

1. Why did Walmart acquire jet.com?
2. Has Walmart achieved their goals? If yes, does jet.com have long-term value to Walmart?

The answer to the first question is that Walmart wanted access to jet.com’s algorithms, technology and executive team, for the purpose of integrating them into walmart.com and accelerating their e-commerce expertise. The answer to the second question is that Walmart has completed the integration and with no new technology or innovation on the way from jet.com, Walmart no longer needs jet.com and I’m confident the brand will be killed within 24 months.

An even bigger reason why Walmart doesn’t need jet.com is Flipkart. If Walmart goes through with their purported $10B to $12B acquisition of 51% of Flipkart, they will need “all hands on deck” managing their increased focus on India, and growing investments in e-commerce with walmart.com and their newly remodeled website. Jet.com adds cost and complexity, not value. Frankly, it’s Management 101 — invest in brands that are growing. Jet.com isn’t growing.

I’m surprised that Walmart hasn’t yet merged Jet.com into walmart.com. It’s just a matter of time before it happens. In this space, it appears that walmart.com is competing against jet.com. As the two sites merge, the need to keep up appeal for their different market segments is of the utmost importance.

With its fast pace of digital-first retail acquisitions, Walmart is building an online house of brands in a shrewd power play intended to broaden its appeal to younger, more upscale shoppers in cities. Jet.com is the platform for this activity, and its founder and CEO Mark Lore is the mastermind.

To me this signifies several key factors about the Walmart/walmart.com brand: It has essentially filled out its geographic footprint and needs new tactics to increase productivity. The core brand doesn’t appeal equally to all shopper segments, so it makes sense to invest in a portfolio of digital-first brands that it can grow fast.

Jet.com on its own doesn’t look like a strong rival to Amazon.com, but the collection of brands (including Walmart.com) adds up to a significant, deep-pocketed competitive challenge. I think Jet.com will stay vital to this strategy for some time, as Walmart pursues its unprecedented effort to dig itself out of the “big middle” of mass retail.

People tend to forget that when Jet.com was purchased by Walmart, it was spending a ridiculous amount of money on customer acquisition. Over $25M a month on both branding and customer acquisition. They had to spend that much to stand out from Amazon and because, even with great tech, they had very few repeat customers. The $3.3B purchase was simply a Walmart mid-life crisis going after the cool new kid and a acqui-hire of Marc Lore and his team. The idea that Jet.com will be the place where urbanites with higher incomes shop is ridiculous. I laughed aloud at Shoptalk when they mentioned that on the stage, and wish Jason Del Rey from Recode had asked a tougher follow up question to push him on why they think that will work. Urabnites will continue to shop at Amazon, Whole Foods (especially when integrated with Prime) and other high-end stores that offer amazing customer experiences and not a Walmart owned Jet.com. This was a good short term purchase for Walmart for the PR, the talent and… Read more »
0
|
0
-   Share

Braintrust
"Jet.com serves as an entry point to customers Walmart frankly doesn’t attract. Will it be around 5 years from now? That’s anyone’s guess..."

"...it was never a forgone conclusion that Jet.com would be leading Walmart’s online efforts in the long-term."

"Walmart is building an online house of brands in a shrewd power play intended to broaden its appeal to younger, more upscale shoppers in cities."