Has Backstage found its place inside of Macy’s? 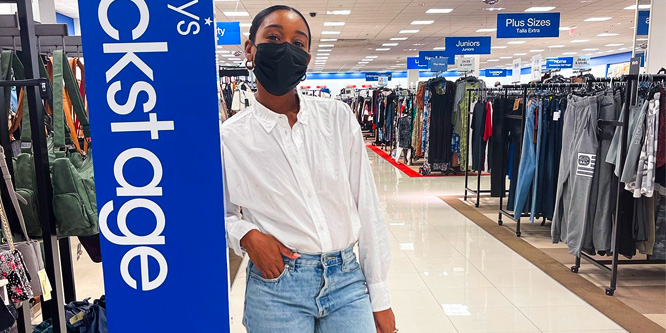 “Macy’s Backstage inspires customers to express their personal style through its offerings of quality merchandise and brands at great prices, which is why we look forward to bringing Macy’s Backstage into more of our local communities,” said Michael Hersh, Macy’s vice president of off-price, in a statement. “We are especially excited to bring Backstage to our downtown stores in Chicago and New York City as the brand expands nationwide.”

Backstage launched in 2015 as a standalone concept as Macy’s looked to tap into strong growth being seen across the off-price channel. By 2016, Macy’s had shifted its focus to in-store shops in hopes the concept would drive higher shopping frequency and pull in new customers. Despite hearing investor concerns about cannibalization, Macy’s by early 2019 was indicating that adding Backstage in an existing store was providing more than a five-percentage-point sales lift on average.

Asked in early March for an update on Backstage at an investor conference, Macy’s CFO Adrian Mitchell said, “It’s an important dimension for us to operate across all three of those value tiers — the luxury tier, the off-price tier and all the stuff in the middle — so it’s been really well received. It continues to have a very healthy growth profile, but it’s certainly tapping into a younger, more diverse customer that’s a bit more value-oriented than our full-line box, so we’re excited about the opportunities there.”

DISCUSSION QUESTIONS: Has the Backstage concept proven itself inside Macy’s full-line locations? Does the rollout of Backstage inside Macy’s stores mean the concept will not take off as a standalone concept?

Please practice The RetailWire Golden Rule when submitting your comments.
Braintrust
"Macy’s has hit the nail on the head with Backstage and the rollout is a smart strategy to capitalize on the success of off-price. "

"So, Macy’s, what are you? Sometimes when you try to be everything to everybody, you become nothing to anybody."

"Macy’s may think of it as a standalone concept, but inside the store it’s just another location for bargains."

16 Comments on "Has Backstage found its place inside of Macy’s?"

Off-price has been strong for years and, in a climate of high inflation, it will continue to do well. Expanding Backstage within Macy’s stores has a number of practical advantages, but the risk of cannibalization is real. And notwithstanding Macy’s decision to operate Backstage from inside full-line stores, this doesn’t mean that they can’t take the concept standalone if and where it makes sense.

Given the growth of off-price, as more consumers seek value to offset inflation, it is hardly surprising Macy’s wants to redouble its efforts in this space. Interestingly, Macy’s is now looking to add Backstage to flagship locations such as Herald Square, which shows the opportunity off-price presents across all income spectrums and geographies. It’s also a recognition of the fact that Macy’s has too much space in some stores and doesn’t know what to do with it. It’s failed at doing things like creating experience with Story – the brand it acquired – so it is now turning to off-price. Macy’s has to be careful that off-price doesn’t cannibalize full-price sales within its stores – and to do this it needs to ensure that the main shop floor doesn’t look like a flea market, which too many of them often do!

Off-price is hot right now and I never understood why Macy’s went away from this idea. When I worked at Filene’s (now part of Macy’s) we had Filene’s Basement as our off-price division and it worked perfectly. TJX and Ross have picked up the business that Macy’s and other department stores walked away from and they are thriving. The current economic climate is pushing all segments of the population to go in search of a bargain and Macy’s is positioned with Backstage to take advantage of the spike.

Macy’s has a “vice president of off-price”…? And a CFO who talks about one of the product tiers as “stuff in the middle”…? They have a separate buying team for Backstage, but whatever happened to the buyers who were localizing under the “My Macy’s” initiative? And how different is Backstage really from the 24/7/365 presence of sale product on the regular floor?

Macy’s has hit the nail on the head with Backstage and the rollout is a smart strategy to capitalize on the success of off-price.

Off-price should be a part of retailers’ product strategy. It’s a sustainable way to offload excess and keeping it in the family like Macy’s and The Rack, with the right vendor strategy, is a win.

One of the key strengths of off-price retail leaders is the ability to offer brands at a low price. For Macy’s, that certainly creates a risk of cannibalization and invalidating the regular inventory. However most of the Backstage merchandise I’ve seen so far focuses on promo and not really national brands. It almost feels like more of a Gabe’s or Christmas Tree than a TJX or Ross so they have found a middle ground with more value merchandise. I expect this to roll out further but the lines are very blurry between regular and Backstage, clarity will be needed in the future and I expect the merchant teams to eventually blend so as to avoid major overlaps.

I’ve found these leftover racks throughout their stores. Maybe it is cheaper, in the long run, they don’t pay anyone to take the unsold goods away. But it sure doesn’t make you think of a brand for anything but price. And with their out-of-stocks so high, there’s only so many walls on which you can hang pants 6′ off the ground to hope to take away from the bareness, as I saw in one of their stores Sunday.

So, Macy’s, what are you? Sometimes when you try to be everything to everybody, you become nothing to anybody. Ken mentioned Filene’s Basement, a destination in itself, both in reality and in the customer’s mind.

When we first discussed Backstage as standalone stores, I liked the idea. However I am concerned. Unlike Filene’s Basement, will Backstage just be another department for customers to trade down?

Filene’s. And Filene’s Basement. It was Selfridge who convinced Field to put a “Bargain Basement” below the street level on State. Outlet stores became the next generation. Nordstrom and Nordstrom Rack.

As the consumer situation shifted and the desire for a “treasure hunt” arose TJX became dominant. I think Macy’s has to sort out the relationship between master brand Macy’s and sub brand Macy’s Backstage. Backstage adds to Macy’s value proposition confusion just as calls for spinning off its “online” presence. This is no time to declare victory. The relevance of the master brand is further challenged.

Backstage is a big mistake. Use the resources to grow Macy’s. If nothing changes the enterprise will go the way of Sears and Lord & Taylor. TJX, Ross, Burlington, Costco, Walmart and Target own this business. In the case of TJX, Ross, and Burlington, Macy’s/Federated gave it away to them. Macy’s can reinvent the industry. And offer the best possible prices on all the major brands that have been funding for years as well as their private label. No one is doing this except for Costco mostly in other classifications. And they are a huge success. Customers have voted for value. Follow the customer and give them what they want with a unique twist. Not close outs but the very newest from the biggest most famous brands at real value price. Work to lower the rent, Lower the expenses, Lower the merchandise cost, lower the markup and lower the prices. Immediately the customer will react and move away from TJX, Ross, Burlington, Target and all others for modern ego-satisfying accessories, shoes, cosmetics, home goods and… Read more »
2
|
0
-   Share

I think we have too many retail locations overall given the digital/direct to consumer shift. So I would expect any concept to have a challenge rolling out a full-line of locations. Moving Backstage into Macy’s as part of its assortment is actually a smart strategy. This will bring more foot traffic to fewer locations and should generate a new mix of customers.

Department stores still have their work cut out for themselves. Brands are moving vertical and private label is not a customer selection of choice for the most part. Macy’s needs to create meaningful differentiation, maximize the use of their square footage and create more services that generate store trips. Backstage is a good start.

I don’t think that customers will note a difference between “Backstage” and any other section of Macy’s that offers discounts. Macy’s may think of it as a standalone concept, but inside the store it’s just another location for bargains.

Macy’s has enough trouble getting people into its own full-line stores. The idea that some segment (within that store) has “proven itself” (enough to operate on its own) I find either ludicrous or remarkable hubris … or a candid admission that the Macy’s name itself means very, very little.

Yes, I think Backstage has proven itself. It’s showing much more sales momentum than the rest of the store. Perhaps Backstage will cannibalize the full-line business, but better for Macy’s to be cannibalizing itself than letting pure-play off-price retailers do the job, as they surely would.

Macy’s entire stores look like a treasure hunt to me — racks and racks of messy merchandise — where the experience signals “low price” to shoppers. Their “stuff in the middle” strategy says it all.

In one of the episodes of the Customer Centric Retailing podcast, @SteveDennis mentioned that Sears had one of the slowest brand deaths in the retail industry. Macy’s, I believe, is going through the same thing. For reasons that I am unable to identify, the brand has not been able to build a clear positioning strategy. Having a low-cost private brand in-store appears to be a classic example of the same.

Braintrust
"Macy’s has hit the nail on the head with Backstage and the rollout is a smart strategy to capitalize on the success of off-price. "

"So, Macy’s, what are you? Sometimes when you try to be everything to everybody, you become nothing to anybody."

"Macy’s may think of it as a standalone concept, but inside the store it’s just another location for bargains."