Has Ben & Jerry’s gone too far with its stand on the Israeli-Palestinian conflict? 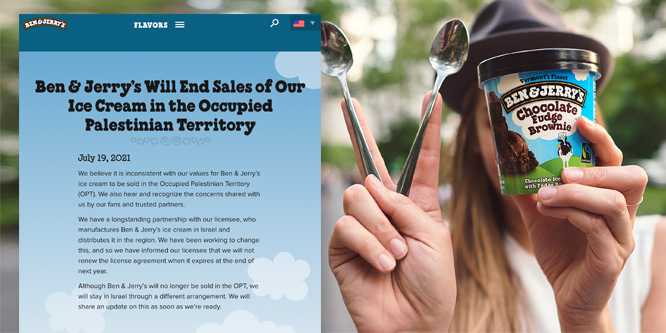 Ben & Jerry’s set off a global firestorm after the Unilever-owned brand announced last week that it would no longer do business in occupied Palestinian territory.

“We believe it is inconsistent with our values for Ben & Jerry’s ice cream to be sold in the Occupied Palestinian Territory,” the company wrote. “We also hear and recognize the concerns shared with us by our fans and trusted partners.”

The ice cream brand, known for its progressive politics and founded by two Jewish Americans, plans to cancel its license with its Israeli distributor when it expires in 2022.

The Israeli government accused Ben & Jerry’s of joining a Palestinian-led boycott campaign against Israel and urged 35 U.S. states to punish Unilever under anti-boycott laws. Unilever risks losing investments from pension funds and contracts with public institutions. The strong reaction was prompted over concerns other companies could follow Ben & Jerry’s lead.

Several grocery stores that are Jewish-owned or in predominantly Jewish neighborhoods in the U.S. and Australia have begun pulling the ice cream brand from their shelves.

Unilever CEO Alan Jope said on a quarterly analyst call last Thursday that Ben & Jerry’s made the decision on its own. As part of the purchase agreement in 2000, Ben & Jerry’s maintained broad independence over its social justice policies.

“Obviously it’s a complex and sensitive matter that elicits very strong feelings,” Mr. Jope said. “If there is one message I want to underscore in this call, it’s that Unilever remains fully committed to our business in Israel.”

Israel captured and has controlled the disputed territory since the 1967 Mideast war. In recent years, opposition to the occupation has increased.

In the findings of the 2020 Porter Novelli Executive Purpose Study, 73 percent of 150 business executives surveyed believe companies have more responsibility than ever before to address social justice issues. The top barriers to taking stands on social justice issues included stakeholders all wanting different things, cited by 43 percent; lack of internal alignment/action on issues, 28 percent; and fear of retaliation from different stakeholder groups, 27 percent.

DISCUSSION QUESTIONS: Did Ben & Jerry’s make the right move? What lessons does the uproar over Ben & Jerry’s announcement offer around companies taking stands on social issues?

Please practice The RetailWire Golden Rule when submitting your comments.
Braintrust
"For the most part, brands are apolitical unless their stewards make them so."

"I applaud Ben & Jerry’s for putting their values ahead of shareholder value. I hope and suspect the brand will survive the current commotion..."

"Historically, Ben & Jerry’s have made difficult decisions by following their true north. It is a rare for-profit company that can cut that path with consistency."

18 Comments on "Has Ben & Jerry’s gone too far with its stand on the Israeli-Palestinian conflict?"

Personally, I don’t care for political positions in business. This year we saw professional sports, airlines, and tech giants take a position and alienate markets. There is room for ethics in business and religious grounds. It is either: what’s good for the goose is good for the gander; or not at all, but we cannot be subjective in it. Ben & Jerry’s has as much right to take its position as many others have. Let the market and consumers decide what the impact is.

Ben & Jerry’s recent announcement was very consistent with their behavior in the past – they are outspoken. The problem here is that the owner (Unilever) and the brand representatives (Ben & Jerry) are not aligned on the issue. That’s the big takeaway. It’s one thing to take a stance on a social issues, but it’s critical to ensure that there is complete alignment, especially when the position is controversial as it was in this case.

If Ben & Jerry’s went bust as a company tomorrow (or the day after tomorrow) and its leadership wound up in misery, it would not bother me a bit. This is the most despicable decision by an American business in a very long time. If justice is done, they should be gone shortly.

I know I’m a contrarian on this subject, but companies have no more responsibility to take social stands now than they ever did. Executives who lead companies have decided to take more public social stands. It’s not the same thing. These decisions will inevitably reflect the opinions of the leaders who decide whether or not the company will spend money and risk business to put on a given social mantle. For the most part, brands are apolitical unless their stewards make them so.

Asking whether this is the right move is the wrong question, Tom. They have often been outspoken over the social issues they feel are important. They have the right to speak out over this issue. They also appear to have the right to have their products discontinued by retailers who disagree with their position. Sometimes business and politics collide — and you have to pick which side you’re on. It’s their choice.

Taking a stand always comes with risks for businesses, but we really need more businesses to take more difficult stands if we are to overcome some of the massive challenges facing our society and our world. Regardless of my opinion on the issue, I applaud Ben & Jerry’s for putting their values ahead of shareholder value. I hope and suspect the brand will survive the current commotion … and I hope more brands will have the courage to take a stand on important issues.

In my honest opinion, brands are entitled to take whatever stand they wish and consumers and other businesses are entitled to respond accordingly. That’s the way a free society, where freedom of speech is prized, should work. Too many people have lost sight of this principle and are only tolerant of speech and viewpoints that chime with their own views — especially when it comes to corporations. That’s not the way it works. As for the stand taken by Ben & Jerry’s on Israel, I don’t agree with it at all — but I respect others have different views to mine and have every right to act on their principles.

This is a highly complex issue. I did see reports that Unilever’s share price dropped by 6% on the news. The timing was interesting — close to the earnings call giving Unilever’s CEO opportunity to explain the structure and B&J’s ability to make their own decisions. There is a wider issue with these types of moves — you are always likely to upset someone! I have seen criticism of Gillette for their approach to the subject of “toxic masculinity.” Stepping into anything political — deliberately or not — can be really tricky. There was a case in 2020 where a famous UK tea brand was shown in a Tweet by a UK politician and what followed was threats of a boycott of the tea brand — despite the fact they had not been the instigator of the Tweet. In this case, the tea company handled this by responding — “Nothing to do with us – people of all political stripes like our brew.” A smart, and neutral response. One thing that is always a risk… Read more »
2
|
-2
-   Share

It’s one thing if your politics are related to your product, like Patagonia and climate, but ice cream and the Middle East? Pretty risky IMO. But hey, seems they’re not worried (apparently) about making people angry as much as they are about pleasing (or confusing) their base. Good luck, boys!

When we agree with a company’s controversial call, we admire their fortitude in the face of adversity. When we disagree, and that disagreement carries strong personal beliefs, we admonish with equal zeal. Such is the human condition. Historically, Ben & Jerry’s have made difficult decisions by following their true north. It is a rare for-profit company that can cut that path with consistency. Who am I to judge?

The question really is, “Did Ben and Jerry make the right move?” This is probably a decision driven — or at least approved of — by the founders, not the Marketing Department. Being an Irish-American, I’m overly familiar with the politics of transformational political polarization. In Ireland, the question of British authority to rule any or all of Ireland became spun up as, “Catholics versus Protestants,” — quite a different issue from whether the Queen “owns” any part of the island. In the same way, the Israel-Palestine issue has become recast as Anti-Semitism on the one side and freedom fighting on the other. The fact is one can — as presumably Ben and Jerry are as people — love Judaism, and maybe Israel, and still be opposed to specific practices of the Israeli government. And, the founders have a long individual and collective history of taking stands that were, and are, unpopular with conservatives. That’s clearly their right. Unilever knew that when they agreed to allow the brand broad ongoing latitude in social justice issues.… Read more »
12
|
-2
-   Share

All retailers, including Ben & Jerry’s, should stay away from political positions. They are not political entities and can only make a portion of their consumer base unhappy with any political statement.

The lesson from the Ben & Jerry’s uproar is simple; Keep politics out of CPG marketing. Also, keep it out of sports and entertainment.

This announcement is quite consistent with Ben & Jerry’s approach to the world, so I do not believe there will be long term damage. Would I have recommended that they take this stance? I can’t say. Any issue and stand of this type lies outside what we typically consider business driven choices — they are intensely personal and are choices only the business owners can make.

I will confess I don’t understand the logic here: you’re opposed to occupation so you (effectively) punish the very people you’re claiming solidarity with by not selling to them?

But even impeccably logical positions are a quagmire: I’m not a fan of corporate activism in general, and nothing here makes me rethink that position.

I think businesses need to stay out of politics. Keep it neutral.

While I applaud B&J for standing true to their values, even when that role may be unpopular, I have to question the selection of the Palestinian Territories for highlighting. If the company wishes to remove themselves from areas of conflict that could lead to genocide, I am assuming that they should start with China and the Uygurs, then proceed to Myanmar and the Rohingya, then include Saudi Arabia and Yemen, and so forth….

Selecting Israel out of all those potential conflicts sites seems heavy handed and inconsistent. Also, the Palestinian issue is highly complex and nuanced — suggest they study it in detail before making broad statements.

Braintrust
"For the most part, brands are apolitical unless their stewards make them so."

"I applaud Ben & Jerry’s for putting their values ahead of shareholder value. I hope and suspect the brand will survive the current commotion..."

"Historically, Ben & Jerry’s have made difficult decisions by following their true north. It is a rare for-profit company that can cut that path with consistency."