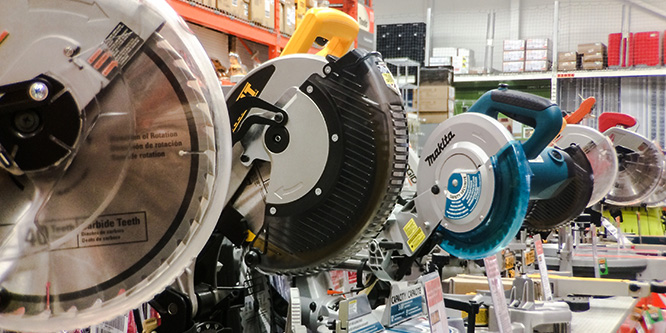 Home Depot has come up with a creative, tech-savvy way to thwart organized criminals from stealing tools off of their shelves.

The home improvement chain has begun stocking power tools that will not function without first being activated via Bluetooth at checkout, according to Business Insider. The tactic will allow Home Depot to continue selling the products without locking them behind cases and negatively impacting the legitimate shopping experience.

The move is meant to specifically target retail theft rings. Such organized rings often recruit homeless people and others living in precarity to steal products from stores, which are then sold online. These operations work at such a scale that they amount to “shadow businesses” that feed supply chains of stolen goods. Home Depot does not foresee criminals attempting to defeat the activation technology, expecting rather that they will move on to something easier to steal.

Home improvement is not the only sector of retail where organized theft has become a massive problem.

Stores in specific regions have experienced pronounced upticks in organized retail theft. This year in San Francisco, Walgreens stores were being targeted by criminal enterprises at a rate four times that of stores elsewhere. Theft has prompted Walgreens to close 17 stores in recent years.

Other retailers have identified San Francisco as a problem area as well and have taken unprecedented measures.

Target, for instance, has begun closing stores in San Francisco early in order to prevent late-night shoplifting, ABC 7 reported. One 7-Eleven in the area installed a metal door through which it conducts business. Customers interested in purchasing something at the location must hit a buzzer to signal that they are there to employees.

Crime rings also put employees at risk, with thieves potentially attacking those who attempt to stop them.

DISCUSSION QUESTIONS: Do you see in-store activation at the point of checkout as being a good way to thwart organized theft rings? Would implementation of the technology being used by Home Depot be feasible in products besides power tools?

Please practice The RetailWire Golden Rule when submitting your comments.
Braintrust
"As long as a legitimate owner doesn’t have to worry about their purchase being de-activated, or any impact to their ability to resell the item later, this makes a lot of sense"

So many people miss that big boxes and stores that cut staff or limp along with less staff purposely give themselves a huge theft problem. I love the idea of what Home Depot is doing with these tools. Does anyone remember when Direct TV, to thwart theft, downloaded one piece of code per day for a year to all boxes? Probably 20 years ago, on a planned day they activated them to make the thieves’ boxes bricks. So smart. More solutions like this are helpful.

I agree! This is a clever idea to deter thieves. The same Bluetooth activation technique can be used for almost any electronic product that is worth the effort.

This makes a lot of sense so you can see why it is being invested in. It will be interesting to see how the technology develops. Will it enable manufacturers to switch off tools or tool functionality of tools already owned – perhaps because the tool has some form of subscription associated with it – in a similar way to how car manufacturers are moving? This approach could definitely benefit tool hire organizations – remotely switching off tools at the end of a hire period.

I once spoke with Home Depot management about theft of items from stores and I was absolutely shocked to learn how much of an issue it was for them. As such, I think this is a sensible measure that should help reduce shrink and also allow more open displays that the majority of honest customers can enjoy. I also believe that we should get much tougher on shoplifting. It is too often seen as a “soft” crime with no consequences, which is absolutely not the case.

I see little downside to this program (other than for the thieves) and if the costs are manageable, I expect this to be a bellwether for future investments designed to thwart retail’s growing organized crime problem.

Very creative solution. I was not aware it was such a rampant problem. I don’t see any downside assuming thieves can’t hack the networks and render the equipment unusable!

Desperate times call for desperate measures. When I speak with loss prevention professionals, I’m always astounded at the level of sophistication and just pure daring that theft rings exhibit. It is relentless and ever-changing. Preventing loss is one side of the story but retailers don’t want to place store associates in policing roles either. I’m not sure how one would activate a designer purse at purchase yet the tool solution would no doubt work for other gadgets and small appliances. Will this work in an e-commerce scenario? Coordinated digital theft is already a thing and clamp-downs in brick-and-mortar could have the effect of just changing the (theft) channel.

I love this creative use of technology to mitigate this issue while at the same time trying to preserve the shopping experience. What’s next though? Might it be buying a subscription or software license to run the tool? Could be. Lots of ideas here, but it’s a sad state of affairs that theft has become so pervasive.

Anything that helps retailers combat shrink is good for business, both by minimizing financial losses and avoiding potential cost increases to the customer. As long as a legitimate owner doesn’t have to worry about their purchase being de-activated, or any impact to their ability to resell the item later, this makes a lot of sense.

Microsoft and Sony have been doing this, through POS, for a long time. I think it makes a lot of sense as long as the consumer is free to do what they want with the device after they purchase it. I would hate to see this scheme used to disable equipment after purchase for some reason. Or infringe on the ability for the consumer to sell an item, or get something repaired wherever they want.

In-store activation seems like an effective way to thwart thieves, at least until organized theft rings figure out a way to clone the technology so they can activate the tools themselves. The problem with thieves is that – at the organized level – they are often pretty smart. Not knowing the specific technology or its limitations it’s hard to answer the second question, but I assume it could be used on a broad range of consumer electronics as well.

This seems to be the “smarter” equivalent of those pesky “physical” RFID tags that can also create damage on high-end apparel. On the surface, this seems like a very innovative (and perhaps smarter) way to solve the same problem in hard goods.

The tech is an interesting, but not effective solution to the problem. Home Depot is experimenting in this case, but LP extends beyond this – and certainly beyond organized crime. Most shrink is still employee driven, not tied to organized crime, which is typically losses of less than 0.1% of sales. This becomes an extra step that really doesn’t prevent much, but may impact customer satisfaction.

Will it be a deterrent? Probably. Will it save money and recover costs? Most likely not. There may be specific cases where the tech can be valuable.

The tech can certainly be used elsewhere other than power tools — I’m thinking appliances.

Genius idea, and real customers will be supportive because the technology saves them money.

As for Home Depot: well, yes, everything that makes theft more difficult will encourage moving on to easier targets, though I don’t know how warranted is their optimism the technology can’t — or won’t — be circumvented. It sounds like it could potentially be used with anything that has an “on” switch, but how it would work if you use the self-check counter is unclear … and of course it could quickly become a headache if things aren’t activated properly.

What could go wrong? Technology always fails. I see lots of customer complaints arising out of this as activation fails to activate or somehow reverts the tool to a brick sometime after purchase necessitating a return to the store. The checkout pace will also slow.

Maybe instead of having a “no stop” policy with regards to shoplifting — how many good store employees have been fired for thwarting a theft against company policy? — retailers aggressively combat the source of the problem: the shoplifter. Stop, arrest, and prosecute every single shoplifter.

It’s amazing that retailers think there would be any other result from their hands-off policy. Just look at what’s happening in California where a no arrest policy has been initiated for shoplifting. Criminals are going into stores and just loading up bags of merchandise and walking merrily out the door with no concern.

Swift, sure punishment is always the cure.

Any way to stop shrinkage is important for keeping margins and protecting the paying consumer from paying higher and higher prices. To think that technology is the way out is foolish as most technology when it makes it to the store has already been figured out by the tech savvy thieves. We saw it with RFID and will continue to see it into the future.

Braintrust
"As long as a legitimate owner doesn’t have to worry about their purchase being de-activated, or any impact to their ability to resell the item later, this makes a lot of sense"