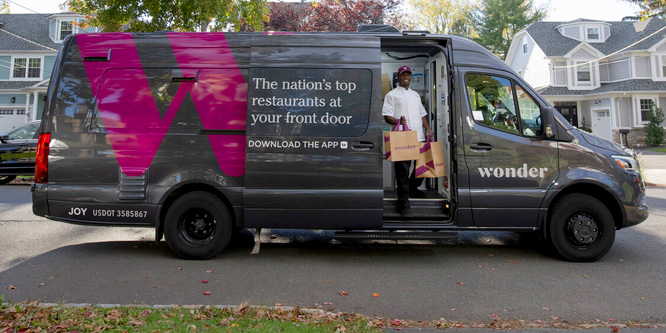 Wonder, the latest venture from serial entrepreneur Marc Lore, supplies customers with chef-designed meals cooked from vans parked outside the their home. The founder of Jet.com and Walmart’s former e-commerce chief tells Yahoo Finance that Wonder balances the value propositions of price, quality and speed around meal delivery.

“The faster we deliver the food, the cheaper it is,” Mr. Lore said last week following an appearance at TechCrunch Disrupt. “That’s how the business model’s set up. When you think about Amazon, Walmart, and Instacart … the faster they deliver, the more expensive it is.”

Wonder’s business model, which borrows a page from Netflix, stands out for its focus on content, securing exclusive rights with esteemed chefs like Bobby Flay and top restaurants to recreate items from their menus.

“We want to lock up all the best proprietary content,” Mr. Lore told CNBC. “Every chef that is well known — every restaurant that’s great — we want to basically lock it up and have it exclusively on Wonder.”

The rest is food science and sophisticated logistics. The ingredients are prepared and packaged in a centralized kitchen to keep operating costs low compared to a restaurant, then transferred to smaller kitchen hubs where they are picked up by vans. To keep hot, the meal is finished curbside. Each van has one trained chef onboard and is dedicated to one restaurant.

Launched in December 2021, the startup is currently delivering meals in New Jersey with aggressive expansion plans across the Northeast before going nationwide. The company will target dense communities to enable one van to do multiple deliveries in one trip.

Wonder scored a $3.5 billion valuation in a June funding round. The Wonder: Food Delivery app has a 4.9 rating on Apple’s App Store and 4.8 on Google Play with reviews praising the food quality, service and value.

The service, however, does have its critics. A Wall Street Journal article from July detailed how fights have broken out on a Facebook group covering South Orange and Maplewood in New Jersey between fans of the service and critics complaining about the noise and pollution from the idling diesel-fueled trucks as well as the impact on local restaurants.

DISCUSSION QUESTIONS: What do you think of the potential for the Wonder food truck service? What do you see as the model’s biggest challenges in achieving scale?

Please practice The RetailWire Golden Rule when submitting your comments.
Braintrust
"How can it scale efficiently with one chef in one van? Call me crazy, but I just don’t see how the math works long-term."

An interesting concept for which there is most certainly a demand. However I do wonder about some of the bold claims such as locking down “every chef and restaurant that’s great.” I’d also be curious to see how profitable this service is as that is usually the Achilles’ heel with these kinds of service – especially as there must be volume limits as to how many meals an individual van can prepare and deliver.

Scale is what comes to mind with this business model. How can it scale efficiently with one chef in one van? Call me crazy, but I just don’t see how the math works long-term. Moreover, I don’t see this model working across a wide spectrum of socio-economic backgrounds. Finally, I agree with Neil that not all great restaurants will want to be locked into this model. There are many fantastic restaurants that are happy to have dining patrons come to them rather than diluting their offering via collaborations such as this.

Good point on the economics of this model. It seems like the pricing would have to be much higher than dining at the restaurant and I doubt that there is a large demand for paying extra to dine at home. In restaurants, chefs can prepare multiple meals at the same time and this food truck model seems inefficient.

I agree – how many customers can one van really provide dinners for in one night?

I live in the initial Wonder market and we’ve tried it three times so far. Haven’t been very impressed with the meal quality (mediocre at best), portion size (small) or customer service (flat). In each case, the Wonder truck showed up on time but took more than 30 minutes to prepare the food. One time, we ordered sushi so I really had to question the wait time. In terms of value, our local restaurants deliver better food for less. We may try it one more time but if it doesn’t taste amazing or is too expensive, we’re done.

As a customer, this doesn’t excite me. If I want a Marion Batali, Daniel Boulud, David Chang or Bobby Flay creation, I want to go to their restaurants with all the appropriate ambiance. Sitting around the table at home to eat a meal by Tom Colicchio just doesn’t cut it.

I like the fresh thinking, but the economics just don’t work. The cost of the meal would be higher than most restaurants to offset the cost of fuel, van maintenance, and the fact that one chef can only serve one household at a time.

I can see this working for corporate catering, ability to finish products on site would improve quality. How profitable would it be for individual home delivery given cost of fuel and labor?

I’m skeptical. (I was skeptical of the Jet.com business model too — shipping liquid laundry detergent?) I don’t see how the numbers work for the average consumer. When confronted with a new idea like this, I’m tempted to ask myself what my grandmother would think of it … and I think the word she’d use is “stupid.”

While intriguing, Marc Lore’s hybrid model of bringing prominent chef-designed meals prepared curbside to your home faces insurmountable operational and customer behavior hurdles. There’s a cost to Mr. Lore’s lockup strategy, as is a risk to the chefs’ reputation. The fixed cost per meal cannot be advantageous today or with increased volume. Venture capitalists drool over serial entrepreneurs. Add to that a novel idea that compares its business model to Netflix, and you have guaranteed sizzle, but not necessarily the steak.

Braintrust
"How can it scale efficiently with one chef in one van? Call me crazy, but I just don’t see how the math works long-term."