How high can McD’s go with all-day breakfast? 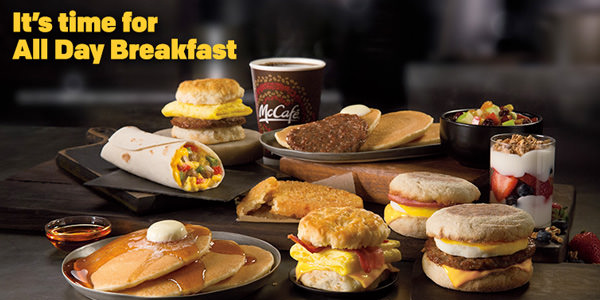 McDonald’s is lovin’ its decision to go to a limited all-day breakfast menu after posting a 5.7 percent increase in comparable sales in the first quarter since making the change. The decision appears to have worked so well that McDonald’s is now planning to test adding its popular McGriddle sandwiches to the menu of breakfast items available all day long.

The recent quarter marks the second consecutive period of same-store growth (previous quarter was up 0.9 percent) for McDonald’s, which is in the process of executing a turnaround plan under its president and chief executive officer, Steve Easterbrook. The company pointed to all-day breakfast and unusually mild weather in the U.S. as factors behind its improvement.

“We took bold, urgent action in 2015 to reset the business and position McDonald’s to deliver sustained profitable growth,” said Mr. Easterbrook in a statement. “We ended the year with momentum, including positive comparable sales across all segments for both the quarter and the year — a testament to the swift changes we made and the early impact of our turnaround efforts.”

According to an Associated Press report, McDonald’s is adding the McGriddle to its all-day menu at 72 locations in Tulsa, OK. The company will test the sale for a two- to three-month period before deciding its next step.

In October there were reports of grumbling among some of McDonald’s franchisees over the company’s decision to make some of its breakfast menu available for purchase throughout the day. Franchisees pointed to more complicated kitchen operations and other factors. Those same concerns are surfacing with the McGriddle test.

The AP report said McDonald’s locations would need to figure out how to work McGriddles into their post-breakfast workflow since the buns used in the sandwiches would be kept warm in the same ovens used to heat apple pies, cookies and mozzarella sticks.

Are you ready to call McDonald’s switch to all-day breakfast a success? Will the addition of McGriddles to the all-day menu take McDonald’s to an even higher level?

Please practice The RetailWire Golden Rule when submitting your comments.
Braintrust
"It is unclear as to the "shelf life" of the positive effects of this decision, but I do think McDonald’s is smart to continue to build on that momentum with additional breakfast offerings. For many, breakfast is the only meal they source at McDonald’s."

13 Comments on "How high can McD’s go with all-day breakfast?"

The apparent success of McDonald’s all-day breakfast decision is a great example of using a combination of consumer behavioral research and a little bit of good old business intuition to affect positive change.

It is unclear as to the “shelf life” of the positive effects of this decision, but I do think McDonald’s is smart to continue to build on that momentum with additional breakfast offerings. For many, breakfast is the only meal they source at McDonald’s with a “drive thru” breakfast being another factor of its appeal to busy consumers.

Perhaps McDonald’s will look to provide Amazon-type services with their breakfast offering by having systems and the platform to recognize repeat customers and be in position to ask them “will you have your usual breakfast today of biscuits and gravy and a small orange juice?”

All-day breakfast is a success for McDonald’s. Yes, it causes some logistical headaches for franchisees, but the increased sales are worth it.

As breakfast is the only food I like at McDonald’s, as well as others, it was a good move. Not a fan of the place, but the breakfast sandwiches are pretty good, and when traveling the coffee is also decent and way less than the Starbucks stuff. I give it a thumbs up on the move for sure.

McDonald’s, like many restaurants, recently cut back on several slower moving items to allow them to concentrate on those that sold. It then it made the move to an all-day breakfast which many have applauded.

The issue was what that did to the BOH processes. There is no question that the move complicated operations but based on news report it appears to have been a good move. However, adding McGriddles to the all-day menu adds another layer of complexity to the operation of relatively small kitchen. It, like the current menu, may also entice customers to switch from other higher-price fare.

Sometime McDonald’s can’t win. A second story in today’s Chicago Tribune was on a McDonald’s customer buying their new mozzarella sticks only to find there was no cheese inside. The company responded by saying the cheese must have melted through its breaded coating during the baking process.

The Egg McMuffin is arguably the best thing on the McDonald’s menu (and the fries!). They should have been offering this all-day option for years but success makes corporations lethargic. It takes pain to force the change. And in a business environment that pain is always about money. As successful as the numbers may indicate, I’d be curious to know the cost to their franchisee community? I suspect quite a number of these folks have paid the cost.

When McDonald’s started advertising their “Pick 2 for $2” promotion, I perceived this as the QSR business decision equivalent of jumping the shark! Adding the McGriddle is just another act of “let’s try it and see if it sticks.”

McDonald’s needs to continually reinvent itself. All-day breakfast is a good new development, but they’ll want to make new offerings available on a regular basis.

I was on a road trip last week and stopped at a McDonald’s around 11:30 for a breakfast sandwich — I like the bacon, egg and cheese biscuit. I was told the only breakfast item they carry all day is the muffins.

McDonald’s has always been know for consistency. So dropping off the Interstate to get a breakfast sandwich and not getting one just made me decide to not participate in McDonald’s “success” ever again.

For all the people out there who do not and have never considered eggs and meat and English muffins to be exclusively breakfast food, this all-day availability move by McDonald’s was about time! Many folks have been making home versions of the Egg McMuffin for themselves for breakfast, lunch, dinner or a midnight snack forever. I bet McDonald’s is kicking itself for not seeing this opportunity sooner.

Adding all-day McGriddles is well worth a shot, too. The logistics may prove mettlesome and un-doable but you never know until you try.

This was such an obvious winner that you have to ask what took them so long. I have written that there are four barriers to finding obvious innovation ideas, one of which is being driven by operational efficiency and having blindspots about what consumers actually want.

Check out other restaurant chains driving solid same-store-sales growth through the 3rd quarter of 2015: Domino’s, Sonic Drive-In, Denny’s, Burger King, Taco Bell. Papa John’s, IHOP and KFC all reported average growth over the past four quarters of 5% or greater. At a time when healthy eating is on the minds of many, most of the top performing chains are not very engaged in the health & wellness space. What seems to matter to their visitors is good tasting and convenient food.

As for the McGriddle, though I think the world would be a better place if it went away, I’m sure a nation that put a man on the moon can figure out a way to heat buns.

No. Only because I think their breakfast is horrible and knowing its being served all day has probably kept me from going there as much. I’m guessing there are some other factors that are playing a roll in increased sales at McDonald’s.

If it increases sales, it’s worth the effort. McDonald’s should invest in next-gen solutions for its franchises, like sensor driven oven fryers and freezers which will enable more efficient management of demand and supply realtime at the outlet.

Braintrust
"It is unclear as to the "shelf life" of the positive effects of this decision, but I do think McDonald’s is smart to continue to build on that momentum with additional breakfast offerings. For many, breakfast is the only meal they source at McDonald’s."