How high will the holiday retail sales ball bounce in 2019? 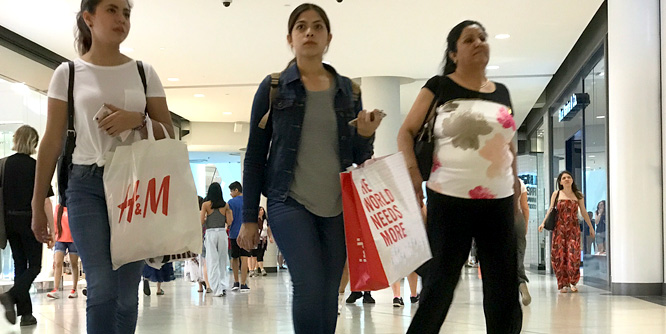 How are retail holiday selling season sales like a bouncing ball?

Roshan Varma, a director in the retail practice of AlixPartners, said that sales during the past five Christmas seasons have been “up one year and down the next.” The ups, just like a bouncing ball, however, have been “lower and lower.” So, how high will the retail sales ball bounce this year?

Separate forecasts by AlixPartners and Deloitte point to a strong holiday season with sales up as much as 5.3 percent and five percent respectively over last year.

AlixPartners’ forecast, however, comes with caveats.

“From on-again, off-again tariffs, to a growing chorus concerned about a recession, a looming election and geopolitical uncertainty, this season is unlike any in recent memory,” said Mr. Bines. “While our forecast is bullish, we are nevertheless advising clients to be nimble. These are uncharted waters, and the best course to set is one that includes strong cost control and flawless execution.”

One element that bodes well in year-over-year comparisons is that sales fell off last December in part because of  President Trump’s decision to shut down the federal government. A similar event is not expected this year.

“Models such as subscription services and resale programs and services might be ways that both traditional and digital-native retailers can drive success this holiday season and beyond,” said Mr. Pressman.

“Any program or model is only as good as the planning that goes into it, its implementation and its ongoing execution,” Mr. Pressman added. “Such efforts should be deployed in a manner where the focus is on the customer and how to message and engage with them in a manner that truly drives value for both them and the retailer.”

DISCUSSION QUESTIONS: Are you bullish or bearish on the upcoming Christmas selling season? What economic, geopolitical or other factors do you think are most likely to affect sales in the last two months of 2019?

Please practice The RetailWire Golden Rule when submitting your comments.
Braintrust
"People's spend is largely based on their own feelings, especially with regard to their finances. "

13 Comments on "How high will the holiday retail sales ball bounce in 2019?"

I’m generally bullish on the upcoming holiday selling season. I believe the economy still has solid momentum, notwithstanding the current tariffs and the prospect of new, potentially even more painful ones in the future. That said, this can change very rapidly. A big fallout with China, conflict in the Middle East and even severe weather events can all wreak havoc on the economy and impact holiday sales.

There is plenty of geopolitical gloom out there, however this is not what drives most spending decisions. People’s spend is largely based on their own feelings, especially with regard to their finances. On that front, the picture is solid: confidence remains high and incomes are reasonably robust. As such, there is no reason to expect this will be anything other than a fairly good holiday season. The one downside is higher gas prices which, if they persist, could take the edge off retail sales growth.

Sales are one thing, margins are quite another – and I see this as being one of the main pressures for retailers this holiday season.

Sorry to be the Grinch, but I still feel that an economic slowdown is inevitable once it trickles down from the industrial and business sectors to consumer spending. (A slowdown is not necessarily a recession.) The mindset heading into holiday 2019 reminds me of 2007 — a healthy shopping season just before the bottom fell out. Whether consumer spending hits a wall this December or in 2020 remains to be seen, but there are a lot of warning signs in terms of the housing market, debt levels, and so forth. Hope I’m wrong!

I am bullish for some retailers, but those that are not evolving are going to see continued drops. I am thinking department stores and some over-stored specialty stores will still struggle. At this point, instability in the Middle East seems to be the most worrisome factor as increased gasoline prices will hit U.S. consumers at a time when they would normally be spending money on gifts.

The relentless narrative from the media the past few quarters has been about our inevitable economic slowdown, the impacts of the tariff war with China, increased retail prices, and diminished consumer confidence. Yet there are positive economic indicators such as the market remaining somewhat steady, and our unemployment levels being at a record low.

However when consumers and investors are bombarded with this daily doom and gloom narrative, it tells the same story we heard back in 2007-2008 of our impending doom, economic crash, and housing crisis. We may just get by this holiday season with some positive results, as retailers are taking a very aggressive value-oriented stance by relentlessly promoting and pushing holiday selling earlier than ever.

There is a small window to capture the cost-conscious consumer, and while it may lead to sales comp gains, there will be a negative impact on the 4th quarter gross margins and EBITA.

I think we are in for a strong holiday season, especially comping over last year’s shutdown. I also predict holiday sales will peak later in the season, as Hanukkah is very late this year. The biggest unknown is the situation in the Middle East. If we see a significant rise in gas prices, it could put a damper on holiday spend.

The bulk of Americans have no more money than they had a year ago, and no prospects for more. Pricing increases due to tariffs are just starting to hit. Manufacturing continues on an 18 month downward trend. Fifty-thousand GM workers go on strike, ultimately affecting ancillary industries with over 1,000,000 workers. Exports have declined in 2019.

If the downward trend in leading indicators hits at the end of the year, it will be a difficult retail season.

I just came from a luncheon with Sonia Lapinsky, Managing Director, Retail, AlixPartners. She wasn’t nearly as bullish in their forecast as the article suggests.

I agree with Neil. Personal decisions regarding holiday spending are based on both what is going on with the economy and how a person feels about their own finances. For example, the economy is doing great but I am uncertain about my job, or my largest stock investment just tanked, etc. Conversely if I just got promoted in a company that is doing well despite the economy my spending is likely to increase.

Bullish on Black Friday — bearish on Christmas business overall. The news cycle is headed into negative territory. As some have noted, the cheer won’t be evenly distributed. I agree that department stores will struggle, with other sectors moving ahead.

I agree that the world isn’t likely to fall off a cliff in the next three months, but there are plenty of potential problems (as noted). I have to shake my head at the comment that something “isn’t expected”: if we’ve learned nothing else in the past two and-one-half years, it should be that expectations are useless.

Yesterday, CNN ran this headline: “The job market is so good, new hires aren’t showing up for their first day of work.” That is the key to holiday sales this year. Confidence builds when there are jobs-a-plenty. So, as long as the creek don’t rise (politically, with tariffs, etc), we’ll have a great holiday.

I still feel that until we reach Retail Equilibrium in terms of stores closing, it is hard to feel overly optimistic. While more and more brick and mortar retail appears to be growing at a more specialty level, big box and department stores will struggle, and until that is all resolved, confusion and negative sentiment will continue to drive things.

With all that said, I am thinking that we may eke out 3-4% y/y for the holiday retail season. The previous point about no government shutdown will loosen things up for government and related workers.

Braintrust
"People's spend is largely based on their own feelings, especially with regard to their finances. "